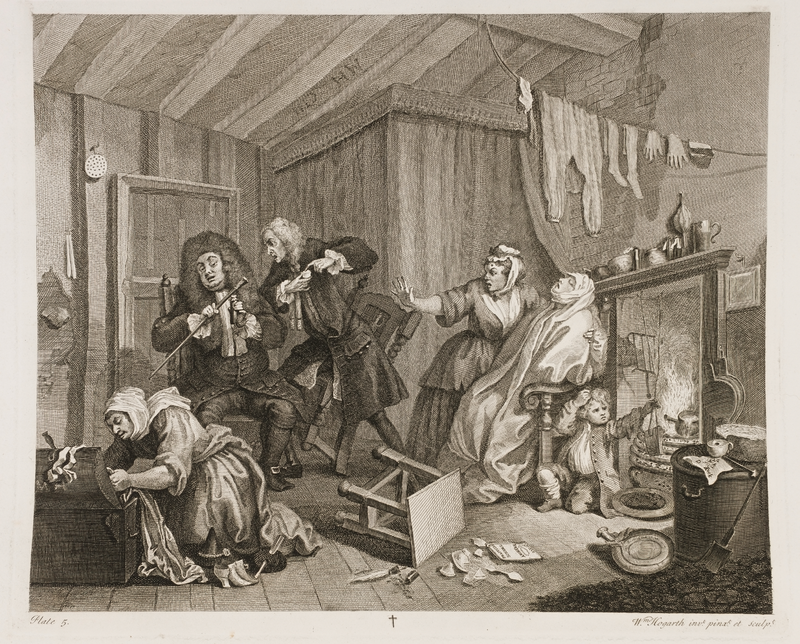 We would like welcome our latest guest writer  the lovely Geri Walton author of the blog 18th and 19th Centuries  who has very kindly written a fascinating article for us about an eighteenth century cure for venereal disease. 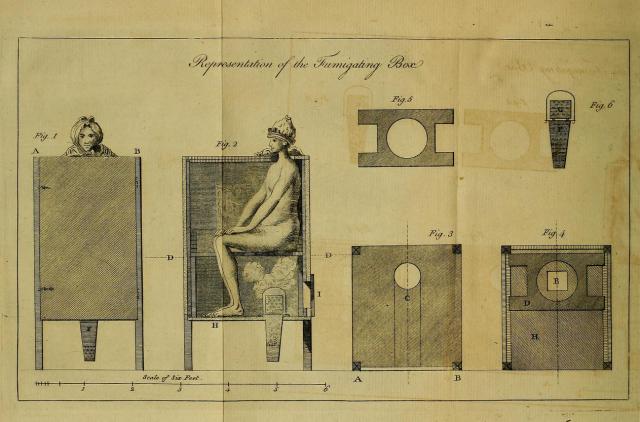 Ancient people believed in the idea that cures could be achieved by providing nourishment through the skin and often used perfume in the form of vapors, known as fumigation. When the bubonic plague ravished Europe, fumigation seemed to be effective in curing it. The idea of fumigation interested Georgian physicians who believed fumigation could be an effective medicinal remedy.

Among those who believed fumigation was a viable medicinal cure was Sir Peter Lalonette (sometimes referred to as Lalouette). Lalonette was, by the late 1700’s, a distinguished doctor and regent of the faculty of Physics at the University of Paris. He also believed the best way to cure venereal disease was by using mercury vapors along with fumigation.

To prove his theories and accomplish his cures, he created a fumigation machine, as shown above. He described the machine as “an oblong square box, in which the patient is shut up.” The patient also sat on a seat that could be raised or lowered to accommodate his or her height. At the bottom of the box a square hole admitted the furnace and a sliding door allowed the mercury powder to be thrown onto the fire to create the vapors. At the top of the box another sliding door accommodated the patient’s head and neck, and, to ensure the vapors were retained in the box, the sliding door was closed around the patient’s neck and a piece of fabric tucked securely around any open spots. 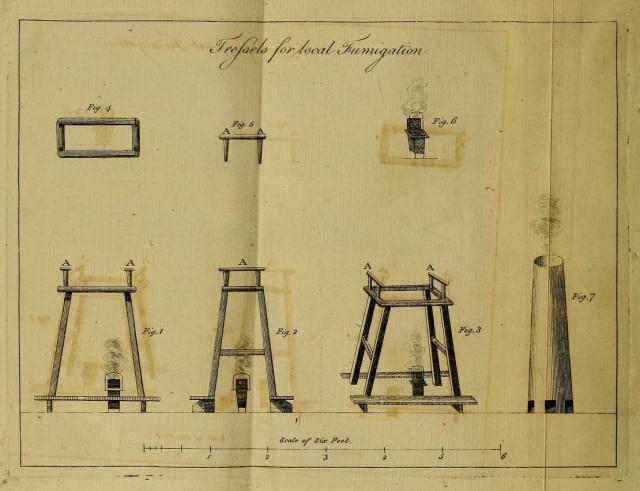 The amount of mercury powder used was proportional “to the violence of the systems, the strength and temperament of the patient, &c.” As a general rule, somewhere between four and six ounces of mercury were considered adequate. Depending on the results, it sometimes required as many as thirty or forty treatments, and treatments needed to be continued until all the disease symptoms disappeared. However, Lalonette also said it was prudent to continue treatments for a short time afterwards “for the sake of greater security.” 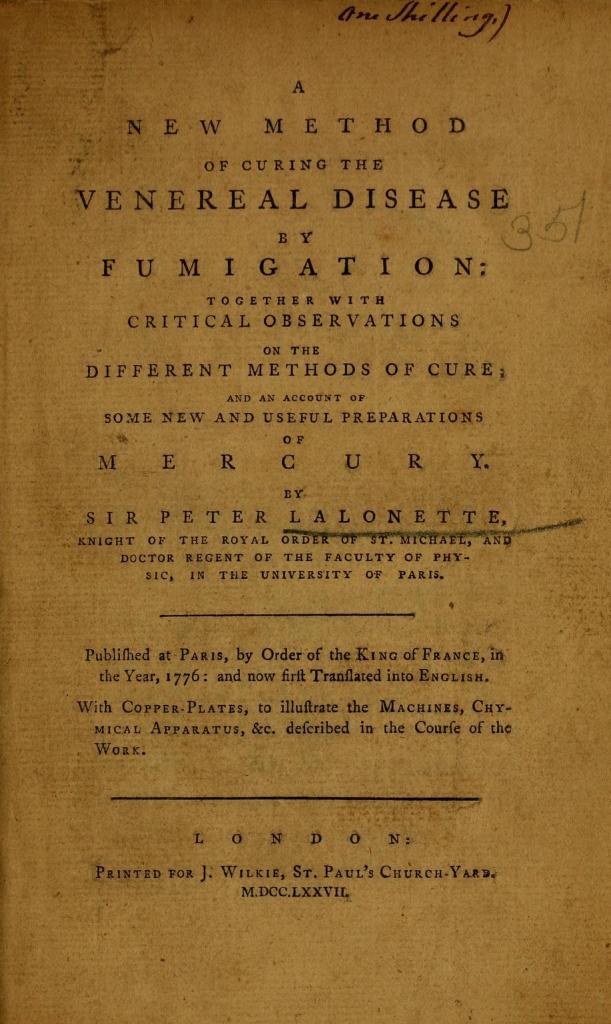 Fumigation was normally applied every other day, although it could also be applied up to four days in a row. Fumigation with mercury vapors were given in twelve to fifteen minute doses to nude patients who had fasted. The object of the fumigation was to have the mercury vapors surround the whole body. In addition, patients were also to adhere to a simple regimen that consisted of “mild food, little wine, [and] no spirituous liquors,” along with exercise.

Lalonette’s patients ranged in age from 19 to 42, and suffered a wide variety of venereal disease symptoms. Common symptoms included such things as urethral discharges, buboes (swollen, inflamed lymph nodes), blotchy skin, pustules, or chancres (cankerous sores or ulcerations). Sometimes sufferers experienced violent aches and pains in the stomach, such as twenty-five year old Luke B., who also experienced nausea and violent vomiting. In fact, Luke B. had so many problems, Lalonette refused to allow him to continue with his fumigation cure. 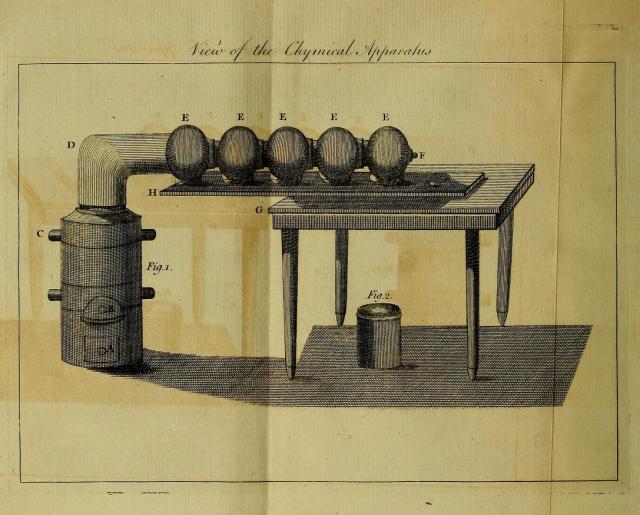 Some of Lalonette’s other cases were more successful. Louis D. age 23 years, began fumigation on September 4, 1772, having been ill five months. He showed a bubo in the groin area, but was cured by October 21, 1772. A second Louis, Louis B., age twenty-one, suffered from gonorrhea for nine months before he began having a discharge. He then developed blotches on different parts of his body and began Lalonette’s treatments in August 11, 1772. While Louis B was undergoing treatment, a third Louis, Louis M., began treatment in October of the same year. He had suffered for five months with “phymosis, and indurations within the prepuce.” His groin was also swollen and he had an infinite number of blotches on his face and body. In December of 1772, however, Lalonette pronounced both Louis B. and Louis M. cured.

Two other cases also involved gonorrhea. The first case involved a forty-year-old man named Joseph. Four years earlier Joseph had suffered from gonorrhea but thought himself cured. Then he began experiencing pain in his leg, limbs, and finally swelling in his ear and gums. When Lalonette saw him he showed signs of “chancres and a bubo.” After about three months of treatment, Lalonette pronounced him cured. John G, age 26, admitted in August 11, 1772, had two obvious “buboes,” which degenerated into ulcers. He also had a discharge from his urethra and pain in his limbs that increased during the night and prevented him from sleeping. However, by October 21, 1772, he also cured due to fumigation. 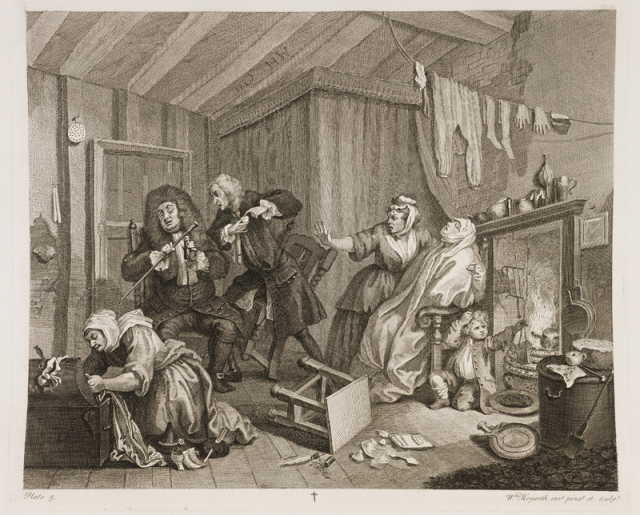 There was, however, one case that Lalonette cautiously reported on involving a twenty-year-old man. His name was Peter D. He had developed gonorrhea two years earlier and not only suffered a urethral discharge but also various “chancres” that appeared all over his body, along with severe pain in his limbs, and “nocturnal pains of the head.” His disposition was noted by Lalonette to be somewhat relieved, but he also added “there are some doubts of his being perfectly cured.”

For the most part, however, Lalonette claimed that after applying his fumigation technique some 400 times, he had achieve miraculous results and wrote a book detailing his successes. It was titled, A New Method of Curing the Venereal Disease by Fumigation. In it he claimed, “I have as yet seen no disagreeable accident from this mode of treatment, and I have constantly observed, that so far from being rendered weaker by it they [the sufferers]…apparently gathered strength during the use of the remedy, and the symptoms have insensibly diminished, till at length they have entirely disappeared.”

Lalouette, Sir Peter, A New Method of Curing the Venereal Disease by Fumigation, 1777, on Internet Archive

7 thoughts on “Sir Peter Lalonette and His Fumigation Machine”