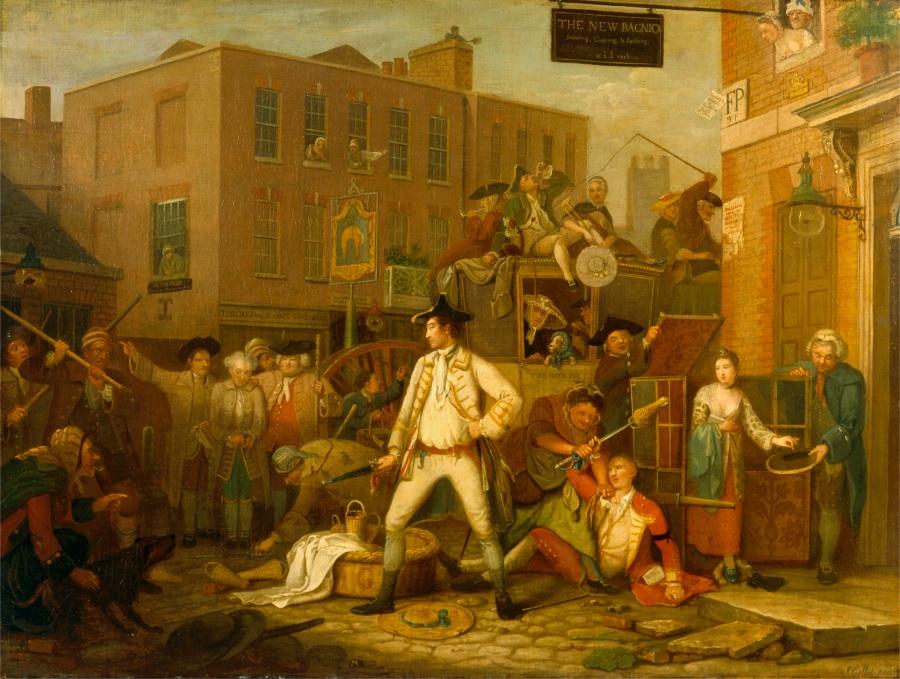 Divorced wife, infamous mistress, a prisoner in France during the French Revolution and the reputed mother of the Prince of Wales’ child, notorious eighteenth-century courtesan Grace Dalrymple Elliott lived an amazing life in eighteenth- and early nineteenth-century London and Paris.

Strikingly tall and beautiful, later lampooned as ‘Dally the Tall’ in newspaper gossip columns, she left her Scottish roots and convent education behind, to re-invent herself in a ‘marriage à-la-mode’, but before she was even legally an adult she was cast off and forced to survive on just her beauty and wits.

The authors of this engaging and, at times, scandalous book intersperse the story of Grace’s tumultuous life with anecdotes of her fascinating family, from those who knew Thomas Jefferson and George Washington, and who helped to abolish slavery, to those who were, like Grace, mistresses of great men.

Whilst this book is the most definitive biography of Grace Dalrymple Elliott ever written, it is much more than that; it is Grace’s family history that traces her ancestors from their origin in the Scottish borders, to their move south to London. It follows them to France, America, India, Africa and elsewhere, offering a broad insight into the social history of the Georgian era, comprising the ups and downs, the highs and lows of life at that time.

This is the remarkable and detailed story of Grace set, for the first time, in the context of her wider family and told more completely than ever before.

Almost two books in one, A Right Royal Scandal recounts the fascinating history of the irregular love matches contracted by two successive generations of the Cavendish-Bentinck family, ancestors of the British Royal Family. The first part of this intriguing book looks at the scandal that erupted in Regency London, just months after the Battle of Waterloo, when the widowed Lord Charles Bentinck eloped with the Duke of Wellington’s married niece. A messy divorce and a swift marriage followed, complicated by an unseemly tug-of-war over Lord Charles’ infant daughter from his first union. Over two decades later and while at Oxford University, Lord Charles’ eldest son, known to his family as Charley, fell in love with a beautiful Romany gypsy girl, and secretly married her. He kept this union hidden from his family, in particular, his uncle, William Henry Cavendish-Scott-Bentinck, 4th Duke of Portland, upon whose patronage he relied. When his alliance was discovered, Charley was cast adrift by his family, with devastating consequences.

A love story as well as a brilliantly researched historical biography, this is a continuation of Joanne and Sarah’s first biography, An Infamous Mistress, about the eighteenth-century courtesan Grace Dalrymple Elliott, whose daughter was the first wife of Lord Charles Bentinck. The book ends by showing how, if not for a young Romany gypsy and her tragic life, the British monarchy would look very different today.

Rachel Charlotte Williams Biggs lived an incredible life, one which proved that fact is often much stranger than fiction. As a young woman she endured a tortured existence at the hands of a male tormentor, but emerged from that to reinvent herself as a playwright and author; a political pamphleteer and a spy, working for the British Government and later singlehandedly organising George III’s jubilee celebrations. Trapped in France during the revolutionary years of 1792-95, she published an anonymous account of her adventures. However, was everything as it seemed? The extraordinary Mrs Biggs lived life upon her own terms in an age when it was a man’s world, using politicians as her mouthpiece in the Houses of Parliament and corresponding with the greatest men of the day. Throughout it all though, she held on to the ideal of her one youthful true love, a man who abandoned her to her fate and spent his entire adult life in India. Who was this amazing lady?

In A Georgian Heroine: The Intriguing Life of Rachel Charlotte Williams Biggs, we delve into her life to reveal her accomplishments and lay bare Mrs Biggs’ continued re-invention of herself. This is the bizarre but true story of an astounding woman persevering in a man’s world.

Take a romp through the long eighteenth-century in this collection of 25 short tales. Marvel at the Queen’s Ass, gaze at the celestial heavens through the eyes of the past and be amazed by the equestrian feats of the Norwich Nymph. Journey to the debauched French court at Versailles, travel to Covent Garden and take your seat in a box at the theatre and, afterwards, join the mile-high club in a new-fangled hot air balloon. Meet actresses, whores and high-born ladies, politicians, inventors, royalty and criminals as we travel through the Georgian era in all its glorious and gruesome glory. In roughly chronological order, covering the reign of the four Georges, 1714-1730 and set within the framework of the main events of the era, these tales are accompanied by over 100 stunning colour illustrations.

Discover over two hundred years of fascinating history relating to one of Great Britain’s foremost aristocratic dynasties, the (Orde-) Powletts, for several generations, the Dukes of Bolton. The family motto, Love Loyalty, references their devotion to the monarchy, but it applies equally to their hearts. Willing to risk all in the pursuit of love, this is the previously untold story of the Dukes of Bolton and their ancestors.