One of our readers last week mentioned the somewhat larger than life Georgian character of Bampfylde Moore Carew via some feedback on our Gypsies of Georgian England article and we decided to see whether we could actually find any new information about him. He was reputed to be ‘King of the Gypsies,’ ‘King of Beggars,’ a rogue and a scoundrel, but was, in all likelihood, simply a very well read travelling storyteller – but we will let you decide!

His is a romantic tale, if questionable in authenticity; after being sent to school at Tiverton in Devon at the age of 12 years he got into trouble for pursuing deer with hounds across the nearby land and, with his fellows, ran away to avoid getting into bother. They met with a tribe of Gypsies and Carew claimed that he travelled with his new companions for a year and a half. Returning home he commenced a career as an imposter and swindler and supposedly took in a journey to Newfoundland before eloping with a respectable girl who became his long-suffering wife.

Carew then took to the road once again and, when a Gypsy King named Clause Patch died, he was crowned as the new King. The authorities caught up with him and, after being convicted of vagrancy, he was sentenced to be transported to Maryland in Virginia. Various escapades and adventures followed in America, but, in short, he managed to escape back home where, once again with his wife and their daughter, he fell into a nomadic way of life, even reputedly having travelled with the Young Pretender, Bonnie Prince Charlie, in 1745.

Where to begin with such a story! From our perspective as genealogists, we started by checking what sources of information were readily available and immediately came across entries for him on the usual websites such as the Oxford Dictionary of National Biography (ODNB) which is widely acknowledged to contain the most accurate and thoroughly researched information and Wikipedia. Here the confusion began; Wikipedia states his years of birth and death as 1693 and 1759 respectively as does the ODNB but other sources gave his birth as 1690 and his death as late as 1770.

The opening lines of a book written about him, ‘The Life and Adventure of Bampfylde Moore Carew‘ stated that ‘Mr Carew was born in the month of July 1693’ and that he was from ‘the parish of Brickley‘.  The parish is actually Bickley, or Bickleigh as it is known as today, (there never was the letter ‘r’ in its name), a village in mid-Devon. So, right at the beginning, we have a discrepancy with the misspelling of his birthplace suggesting the book had been written by someone other than Bampfylde himself; clearly, we were not off to a good start. One would assume that in the first few lines of the account of his life that the basic facts were correct – not so!

So, without further ado let’s get the basics resolved.

His baptism took place at the parish church in the village of Bickleigh, Devon on 23rd September 1690, he was baptized Banfield Moore Carew, son of Rev. Theodore Carew and his wife Alice née Pearce (whom we found via the couple’s marriage record); quite possibly the vicar misspelt his name in the register.  According to his ‘Life and Adventure’, he was named in honour of his two Godfather’s, the Honourable Hugh Bampfylde and Major Moore.  Hugh Bampfylde was said to have died after falling from his horse, and this would seem to identify him as Colonel Hugh Bampfylde, eldest son on Sir Coplestone Bampfylde of Poltimore, Devon, who died in a riding accident in 1691, two years before the accepted birth date for Bampfylde.

The Bampfields are an old and established gentry family in Devon. Sir Coplestone Bampfylde (1637/8-1692) was the one who changed the spelling of the surname, possibly to distance himself from his direct ancestors who had fought on the side of Parliament rather than on that of the King during the Civil Wars.

Bampfylde’s marriage didn’t take place until he was in his 40s, when, at Stoke Damerel in Devon on the 29th December 1733, he married a Mary Gray; the name does tally with a Miss Gray named in the book, whether she was the daughter of an apothecary/surgeon from Newcastle-upon-Tyne (as claimed) or not, we simply don’t know. We do however know that the surname Gray was a popular one amongst the gipsy community, so it is feasible that she was actually a gipsy, given his supposed connection with those people.  According to Carew’s story, the couple married at Bath where they spent some time, the implication being that they were only young at the time, but, unless for some strange reason they married twice this account seems improbable!

In 1734, virtually a year to the day after their marriage Bampfylde and Mary presented their son Theodore for baptism, again at the parish church in Bickleigh then tragically, a mere two days later, the records show a burial for the child.

Four years later according to records held by Devon records office, Carew was sentenced as a criminal for transportation to Virginia. It was usual for a person being transported to have a Bond and a Contract issued, however, for Carew he was only named on the Bond, leading to speculation as to whether he actually was transported or not.

Carew talked fondly in his story of a daughter, Polly (a nickname often used instead of Mary), but so far any baptism record for this daughter is proving somewhat elusive, despite a mention of her marrying. There is one possible marriage for a Mary Carew at about the right time, but it took place in London, which does not fit with his account of her marrying a young gentleman who lived nearby in Devon.

Despite not being able to find the baptism we know that the couple most definitely did have a daughter named Mary as she was named in a vagrancy order issued at Sherborne, Dorset, dated 21st November 1745, along with a Robert Jones who was travelling with them. 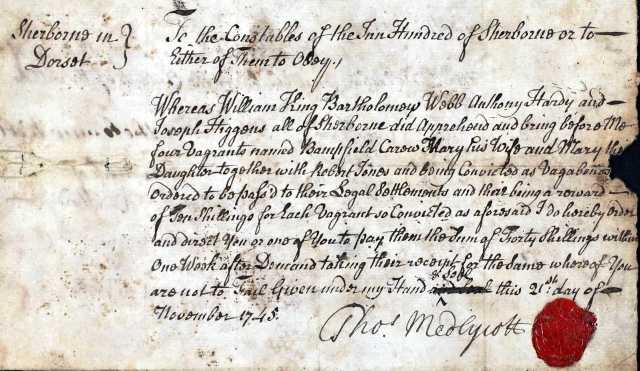 In part of his story, Carew says that he had ventured as far north as Scotland and was travelling with Charles Edward Stuart, the Young Pretender, and he specifically stated that he had accompanied the Young Pretender back through England to Carlisle and Derby. According to records, the Young Pretender entered Carlisle on 10th November 1745 and then travelled south reaching Derby on the 4th December 1745.  Given that Carew and his family were arrested as vagrants on the 21st November 1745, at Sherborne in Dorset, it seems unlikely that this part of his story has any truth in it; more likely the authorities returned him from Sherborne to his birthplace of Bickleigh.

There are known Jacobite sympathies in his family though; the son of Colonel Hugh Bampfylde who was stated to be godfather to Carew, another Sir Coplestone Bampfylde, this one the 3rd Baronet, was suspected of being a Jacobite in 1715 and imprisoned for a time.  Another Bampfield, Joseph Bampfield (1622-1685), who was dead some years before Carew was born but whose story was no doubt told to him, had, with his lover Anne Murray, helped James, Duke of York, second son of King Charles I and the future King James II, to escape in 1648 during the English Civil Wars, disguising the young man in women’s clothing.  Possibly Carew’s sympathies lay on the side of the Pretender in 1745 and he used anecdotes he’d heard in his youth to embellish his own tale.  It is not known to which family this Joseph Bampfield belonged but he is thought to slot into the Devonshire Bampfield’s somewhere.

We then moved on to searching for his burial, with dates for this varying between 1758 and 1770. To confirm it once and for all the actual date was the 28th June 1758 and he was buried at the same church in which he was baptized.

The London Chronicle dated 28th August 1759 reported his death, but as you will notice it was over a year after his actual burial!  His death must have gone unnoticed and unreported for over a year.

Bath, August 27th The well-known Bampfield Moore Carew, stiled the king of the Beggars died lately at Bicknel, Near Tiverton, in Devonshire in the 60th year of his age, after 50 years travel.

His life story is so complex that rather than try to provide a ‘potted’ version we simply offer you a link to the book should you wish to learn more about him.

Each time we have found one fact that checked out we found so many more that simply didn’t. Carew provided us with so many names to try to validate, but each time we came across one and searched the internet we inevitably came back to his story, but rarely, if ever, was the person mentioned anywhere else!

He either had the most adventurous life that read like something from a ‘Boys Own’ comic, or most of it was total fiction.  As we really can’t decide, we simply offer you the information we have found and you make your own decision, we would, however, say that the reality probably falls somewhere in between the two!