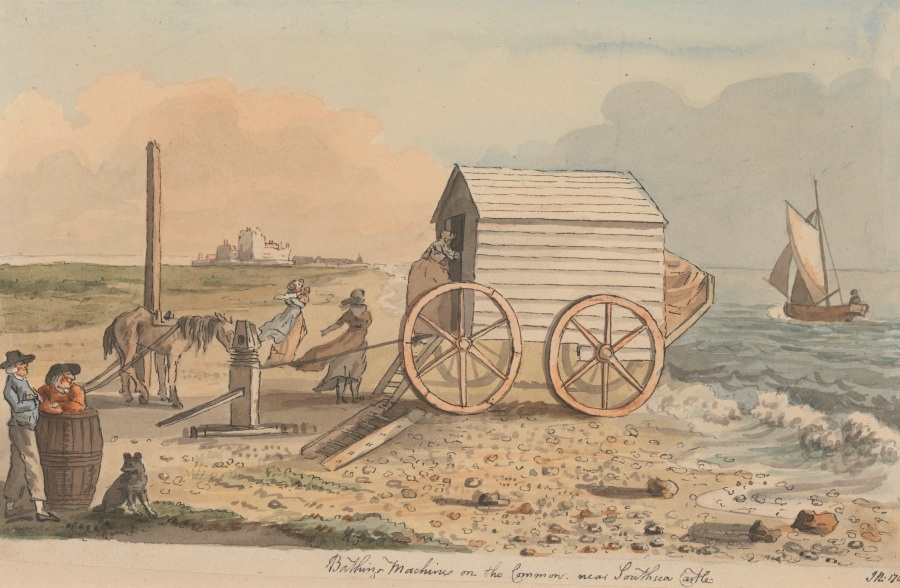 During the eighteenth and into the nineteenth-century it became fashionable and beneficial to enjoy the pleasures of swimming in the sea so, in order to preserve modesty, bathing machines were invented. These allowed the swimmer to enter the contraption fully clothed, undress and get into the water virtually unseen; to swim then return to the machine to get dressed again and leave through the entrance they had arrived through – all very discreet.

Scarborough, Yorkshire was reputed to have been an excellent place to swim in the 1730s, but as to whether they had bathing machines we’re really not sure.  Certainly, by the 1770s as you can see above, the bathing machine was very much in evidence.

The first reference we came across of a bathing machine was in the Caledonian Mercury, dated 14th August 1750, although such a machine was believed to exist prior to this.

That the BATHING MACHINE will, from Monday next, be attended close from half flood to half ebb, every lawful day by Thomas Weir Carter in Leith; his station with the same is to be upon the sands to the west of the glasshouse, in order to carry such ladies and gentlemen who want to bathe. And no weather needs to stop the use of it, as by the contrivance persons may bathe securely, without being any ways exposed to the weather. It will hold four persons easily, furnished with pins to hang up their clothes, and clean napkins will be there ready for rubbing.

In 1754, the Whitehall Evening Post carried an advertisement for the

New invented machine for bathing in the sea. The machines move on four wheels, on which is erected a commodious dressing room, furnished in a genteel manner. The machine is contrived, that the persons who bathe descend from out of the above room into the bath, which forms itself in the natural sea, seven feet in length and five in breadth, all enclosed and railed, which renders it both secure and private. The machine during the last season met with genteel approbation; and in order to make still more useful, the proprietors have this season provided an additional machine with proper conveniences for bathing at all times. A woman is appointed to attend the ladies if desired.

As the fashion for swimming in the sea along with its reputed benefits grew, more and more coastal towns had their own machines, set up on the beach from Tynemouth, in the north, to Brighton in the south and everywhere in between.

One of the most famous people to develop a bathing machine was a Quaker, Benjamin Beale. However, in 1767 there was an immense storm in Margate and his bathing machines were damaged, as they had been twice before, in 1763 and 1764. His loss on this occasion was estimated to be worth over £1,000 and it totally wiped out his business. So much so that Sir John Shaw and a Dr Hawley, of Great Russell Street, sought assistance for him, to enable him to rebuild his business. This was successful and the business was rebuilt, and Benjamin continued his trade until his death in 1775.

As the fashion for sea swimming caught on others developed their own business too, such as these trade cards shows for the ‘The Dunn’s machine’ and ‘The Phillpot’s machine’.

In 1770, Margate became so popular that it even produced its own holiday guide containing

a particular account of Margate, with respect to its new building, assemblies, accommodations, manners of bathing, remarkable places in its neighbourhood and whatever else may be thought necessary for the information of strangers.

Swimming in the sea was a risky affair and there were quite a few incidents recorded of accidental death due to drowning. Other incidents were less dramatic, but somewhat embarrassing, such as the one noted in the St James Chronicle of 1778 when a bathing machine containing ten people capsized. Most escaped to shore… but minus their clothes. There were also reports of people having a few too many drinks, climbing into the bathing machines to sleep off their excesses and the tide changing and them waking up the next morning to find themselves in the sea.

Apparently, in 1794, two dignified ladies decided as a wager to swim from one bathing machine to another, one was seized with a cramp, but not being out of her depth was rescued. Hopefully, the wager wasn’t too high!

Men and women were segregated for the sake of women’s modesty, but occasional incidents happened where women had to be saved by a gentleman when they swam out of their depth – a few red faces there then!

Here’s a bit of newspaper gossip for you from The Public Advertiser, October 1791.

Man caught in bathing machine with woman, both naked at the time.

Sorry to spoil your fun, it transpired that they were actually husband and wife, but still, it made the newspaper.

Of course, when in Weymouth, the royal family enjoyed a swim, especially George III but apparently his daughter, the Princess Royal, less so as she appeared to feel the cold more and looked half-frozen after her swim.

To finish we couldn’t resist sharing this image of Prinny, The Prince Regent – no words!