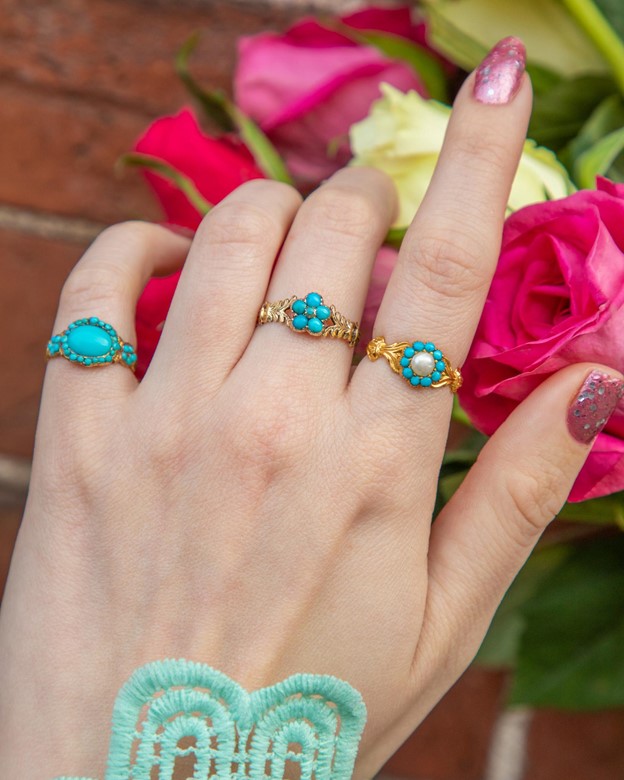 Today I’m thrilled to welcome a new guest to All Things Georgian,  Molly Chatterton of Lillicoco, antique and vintage jewellers, to talk about a subject close to my heart – 18th century jewellery, so without any further ado I’ll hand you straight over to Molly:

The explosion of Bridgerton on our screens late last year has brought a renewed interest to the Regency era. And whilst we were glued to our screens waiting for Daphne and Simon to just profess their undying love and devotion for one another, we couldn’t help but also be dazzled by the array of glittering jewellery.

Whilst some jewellery historians have already said that the jewellery within this TV series has taken the artistic licence quite liberally, it does make us wonder what kind of jewellery was worn in this period, and specifically, the types of jewellery worn to debutante balls and important occasions.

If there was something that the Georgians specifically wanted from their jewellery, it was luminosity, vibrance and colour, and this was achieved through the ancient art of foiling.

18th and early 19th-century lapidaries could only do a few certain kinds of gemstone cuts. These included rose cut, table cut, and flat cut. Unlike more modern gemstone cuts, these gemstone cuts did not reveal the natural innate fire of certain gemstones. That being said, they certainly possessed their own romantic character and allure. To increase the gemstones vibrancy, and to add more colour and depth, the Georgians placed foils in the backs of the gemstone settings. These foils could be the same colour as the gemstone or they could be a different but complementary colour entirely.

The foils were designed to increase the refraction of light, creating an intense flash of colour and draw the eye to the centre. Some of our favourite foiled jewellery pieces in our collection have included pink-foiled Amethyst and Paste, peachy-foiled Diamonds and Paste, and sumptuous foiled Garnets.

Foiled pieces were highly fashionable and sought after for 18th and 19th-century balls, this is because the foils would literally come alive in candlelit rooms. 18th century and early 19th century fashions lowered the decollete of ballgowns, which, of course, led to more flesh on display. With this in mind, foiling was commonly used with earrings, riviere necklaces and pendants. So, if you wanted to attract a certain suitor, then this style of jewellery would literally catch their eye and draw their gaze towards your face and neck.

It is no secret that beautiful bejewelled jewellery and the night sky certainly have a stylistic affinity with one another. You can find a myriad of celestial fashion jewellery today but did you know that astrological themed jewellery was in vogue during the 18th and 19th century?

This rise in Georgian celestial jewellery coincided with the Age of Enlightenment (1650-1780). Just a century before, there were spectacular scientific discoveries made by Galileo about outer space. This clearly held huge weight within Georgian society, as the whole world was not only bedazzled by the universe, but also what part they played within it. With this in mind, the interest in astrology boomed, and it wasn’t long for the fascination with the heavens to pass through the minds of astronomers to the fingertips of jewellers.

One of the two most sought after pieces of Georgian celestial jewellery were Bagues Au Firmament and Halley’s Comet. Bagues Au Firmament were a fashionable ring trend first emerging in France, and were even worn by the Queen Marie Antoinette herself! Bagues Au Firmament dreamily translates to “Ring of the Heavens”, and they were a poetic rendition of the night sky. These rings were often a sea of blue Enamel or blue glass, and were speckled with Diamonds or Paste gems. Certainly a statement piece, these rings were a must-have for any regency ball. As not only did it show that you were learned in the art of the universe, but also that you had the taste of Parisian and French fashions at your fingertips.

The second type of Celestial jewellery that was a must for regency balls were Halley’s Comet jewellery. If you weren’t already aware, Halley’s Comet is one of the world’s most famous comets, circling the sun every 75-76 years. The comet was named after Sir Edmund Halley, a royal astronomer who accurately predicted all of the comet’s sightings. In 1759 and 1835, the comet made its regular appearance in a scheduled and timely manner. What resulted was an explosion of commemorative jewellery, from Diamond shooting stars, Paste-encrusted sunbursts and meticulously carved intaglio’s of Halley’s face. We can just imagine the numerous balls and parties that were thrown to celebrate the comet’s arrival, the long-awaited special VIP guest of the night!

Just like the Bagues Au Firmament, it was paramount to have these quintessentially romantic jewels at regency balls, especially if you wanted to have the gossip periodicals discussing your etoile-encrusted ensemble the next day!

Giardinetti jewellery is beautiful and captivating. Throughout the 18th and especially in the 19th century Flowers were a fashionable and symbolic bejewelled choice, especially when it comes to the art and ardours of love. So much so that this culminated in the Victorian language of flowers.

These were mainly rings and brooches that were speckled with tiny blossoms of Rubies, Emeralds, Diamonds and coloured Paste gems protruding from Silver and Gold flowerpots. This style of jewellery reflected the delicate and elegantly composed fashions of the Rococo period, as well as in keeping with the floral embroidered gowns that were in vogue from the 1740s to 1780s.

Giardinetti jewellery was a literal breath of fresh air in the world of 18th century fashion, adding an innocent soupçon of sparkle to a pastel silk gown. Giardinetti gems were also exchanged between lovers and friends, perhaps Simon would have given Daphne a Giardinetti ring or brooch to show the other suitors just what they were missing!

One thought on “Bold Bling, Romantic Posies and Star-Set Jewels, Georgian Jewellery That Would Even Make Even the Cast of Bridgerton Jealous!”