Today, I have another guest post, by Etienne Daly about his research into the burial of Dido Elizabeth Belle‘s sons.

I started my search back in February 2016. Finding Charles, William Thomas was no easy feat as I thought it would be. Having contacted most of the cemeteries in Greater London, starting with the Brompton Cemetery, where Lavinia Amelia Daviniere, late Wohlgemuth, was buried, then nearby Margravine Cemetery and on to Paddington Cemetery, all bearing no fruit. It was the same story for Highgate and others. I eventually fell upon Kensal Green Cemetery in north London as a possible because both Charles and William Thomas lived nearby. Charles in Notting Hill and William Thomas in Paddington, with both staying within those areas for much of their lives, they married, had children, lived and died in those boroughs, but they did also travel.

My first call to the cemetery bore fruit as they were able to locate the grave of William Thomas on their register and gave me those details over the phone, whilst asking for any findings on his brother Charles or any other family members. ‘No, I’m sorry we can’t find anyone else listed here’,  I was told. Odd? Perplexed I thanked them for their help. I continued my search for Charles and his family. Looking everywhere I could think of, but no joy and getting a bit frustrated, when I came across by chance, on Billion Dollar Graves.com, an image of a grave with a marble cross above it and written below was Charles George Daviniere, buried at Kensal Green Cemetery. Died 16th January 1899. I knew then that this was Dido’s grandson from her twin son, Charles. Eureka, I cried as I always felt that if William Thomas was buried there, his older brother Charles would be too. So, quickly I grabbed the telephone to call the cemetery with this find.

Even with this call, they could not find a listing straight away, I even mentioned the site that I had found the details on. They suggested I leave it with them, and they would email me with any findings and references they could muster. I was hanging onto a thread of hope.

A day later I was emailed the information I wanted and again, I reached for the phone to call Kensal Green Cemetery, but this time I had a contact name who was dealing with my enquiry. I explained that I was puzzled that there was no sign of Charles, Dido’s son and could they please check again, and still even after that they could not confirm that Charles Daviniere (who died 24th January 1873) was actually at the cemetery. I even gave his title as Lieutenant Colonel –  still no joy.

At least I have 2 family members now, so the next thing was to visit I thought. Absolutely.  I had a contact at the friends of Kensal Green Cemetery who was able to pinpoint the exact area for me from his experience of the site as a whole.

There are thousands of graves that are intertwined just in the area I was going to visit let alone the cemetery as a whole without this knowledge the find would have been a lot longer, believe me. Needle in a haystack!

The first grave I found was in the sections 66 and 67 and was that of William Thomas, Dido’s last child, who I was able to establish then and there, was born on the 17th of December 1800.

I thought at the time ‘what a lovely Christmas present  Dido got that year and just a week before that big event, a baby’. The grave is a ledger, a flat stone that covers the burial site and this one is made of pink granite –  very expensive for the time. It was deeply engraved (a difficult job in those days), where all the family members were inscribed, William Thomas Daviniere – died 10th September 1867; wife, Fanny (Frances) – died 19th January 1869; Emily Helen (daughter) died 2nd March 1870. And finally, another relative William Charles Graham, nephew of Fanny. He lived with them and oddly he died on the same day and month as his uncle but being 10 September, three years later in 1870. So, within 3 years of William Thomas’s death, all the family were gone, all buried there.

A tree behind the ledger is tall and could have been planted there at the time of the final burial. Worth noting is the condition of the ledger today, given that it’s been in situ what will be 153 years this September, you would think it’s only been there 10 years maximum, it has weathered very well and has a sheen to it, remarkable really. And all the lettering is legible not eroded.

Having visited this grave I made my way to find that of Charles George Daviniere, bearing in mind it was a blowy, early March day in 2016, so not the best of days to linger around, quite cold too, with parts of the cemetery waterlogged. 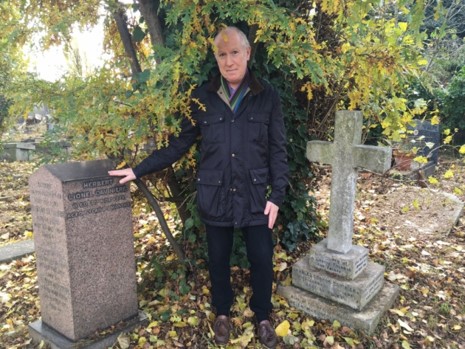 I knew what to look for which was a marble cross albeit a bit grubby in appearance from the weather and placed on 3 tiers. I was told this grave wasn’t too far from that of William Thomas, in fact, it was only a stone’s throw away, literally so.  Upon finding it fairly quickly, thanks to my contact, I noticed the grave was in a bad state and not tended to for many years. I noticed some of the family names were there, but not all.  First, to be buried was Charles George who died on 16 January 1899, then was his son Percy Angus, he died 10 June 1904 in his 25th year and which was next followed by the wife of Charles George, Helen Marion Daviniere. She died on 23rd July 1932, a long life considering she was born in 1849/ Finally their youngest son Charles Crawford, who died on 28 Jul 1937, only into his 51st year, being born in 1886.

Reflecting again on the condition of that grave I turned to my left and noticed just beside Charles George’s monument, and I mean literally beside it, was a granite obelisk-shaped headstone which was in better condition, very grubby through many years of exposure to the weather. Encrusted with dirt, grime and birds mess. Upon closer inspection and to my complete surprise I saw first, inscribed the words: Lt. Col. Charles Daviniere of the MADRAS ARMY. Died 24 January 1873. In his 78th year.

Jumping for joy I read the other now grimy looking names on the obelisk: Lavinia Hannah Steele, died 20 February 1876, aged 38 years. To the side was a child’s burial, a son of Charles George – Herbert Lionel Daviniere, who died 20 November in 1878 only 17 months old –  that was sad.

Lastly, was Charles his wife Hannah who died on the 14th of November 1883, some 10 years plus after the death of her husband. All now found by me and by chance. I noticed Hannah had the longest life dying at 70 years that was a good life span for the Victorian era.

They were all ‘upper, middle class,’ worth noting that Charles, William Thomas, Fanny and Hannah (Nash) Daviniere were all born in the Georgian era, 1795, 1800, 1801 and 1813 respectively. Their offspring all born in the Victorian era. But not all of Charles George’s children were buried at Kensal Green Cemetery.

I quickly advised the staff at the burial office of my find, which they noted, and all sites are now included fully in the register so that other visitors should not have the difficulty I had, finding the graves. Having found the graves, I decided, that given their condition, if it were possible to have them renovated and cleaned up so they could look bit more respectable, so I contacted the nearby undertakers, E.M. Lander who like many funeral directors handle restorations, as monumental stone Masons. I explained the task at hand to him and they took over from there liaising with the cemetery directly and with clearance from them, started work in February 2017.

You’ll be able to see from the images how good a job they did of the three graves and I, in turn, attempt to visit these graves at least bi-monthly in order to keep him clean tidy and free from any fallen debris. Such a shame other graves unlocked looked after. I noticed on a recent visit that a nearby grave that had looked very weathered, had been cleaned up and the marble now looks bleach wide and surrounding area tidied up.

Anyone wishing to visit the Daviniere’s graves will be able to see from the map and the grids shown here, how to get there without needing a compass. You will also find the staff at the main office entrance on Harrow Road, most helpful.

Finally, some helpful tips  – good footwear, an umbrella, a good coat should you visit in the wintertime, tissues/wet wipes to clean your shoes and boots after leaving the cemetery.

5 thoughts on “Where are Dido Elizabeth Belle’s sons buried?”