For our regular readers, you will by now have probably gathered that as well as all the other research we usually do, we have also been investigating the life of Dido Elizabeth Belle.  Dido, her life and family have become something of an obsession for us of late and we have been busy piecing it together and trying to rectify some of the misinformation that currently exists.

We have recently shared with you new information about Dido’s siblings who were born in Jamaica, but in today’s post we are taking a look at what happened to the real Dido Belle, who, at the end of the film Belle ‘walked off into the sunset’ with her man, the lawyer, John Davinière.

*SPOILER ALERT FOR THOSE WHO HAVE SEEN THE FILM BELLE*

John was not, the son of the local Reverend in Hampstead, nor was he a lawyer and as such would have had absolutely no involvement in the Zong massacre case. A little creative licence used with that one!

John Davinière as he was known in England, was born Jean Louis Charles Davinière in the town of Ducey in the Normandy region of France and was one of several children born to Charles Davinière and his wife Madeleine Le Sellier. He was baptised on 16th November 1768, and so was several years Dido’s junior.

He left his native France for England towards the end of the 1780s, so, just prior to the French Revolution; the date of his departure from France is not quite clear as it appears in a couple of places later in his life at which time he gave differing years for his arrival into England. However, on coming to the country, he found work as a steward or valet, again the terminology of his occupation varies slightly.

No-one knows how he would have met Dido, but it seems likely that the Murray or Ramsay family would have been involved in some way. We do know that Allan Ramsay had painted a portrait of the 6th Earl of Coventry in the 1760s and Dido’s marriage entry provided us with a snippet of information in the shape of one of the witnesses – John Coventry, who was the third son of the 6th Earl of Coventry who owned a townhouse on Piccadilly so it seems quite likely that this would have been who John initially worked for as a steward. The other witness was Dido’s close friend, Martha Darnell.

According to the Westminster rates books, not long after their marriage on 5th December 1793, at St George’s, Hanover Square, the couple moved into a newly built house, 14, Ranelagh Street North, near St George’s Hanover Square. It’s interesting to note that the happy couple married on the same day, at the same church and by the same vicar as the first Duke of Sussex and his bride Lady Augusta Murray.

They appear to have lived a happy life and with it, the arrival of 3 sons, of which two, Charles (1795-1873) and William Thomas (1800-1867) survived into adulthood, John, Charles’s twin brother, did not survive. They wouldn’t exactly have been destitute as Dido received not only an inheritance from Lord Mansfield who died in 1793, but also, in 1799 upon the death of Lady Margery Murray, she received a further legacy as ‘a token of her regard for Dido’.

In July 1804, Dido was sadly to die, leaving John to raise the two young boys alone.

The actual date of her burial remains unknown as there were many burials at St George’s Fields that month and most unhelpfully there were not dated. Dido’s was number 56 out of  73, so it was probably towards the end of that month.

The entry in the burial register for Dido July 1804. It is believed that her remains were removed during the development of that site, but no conclusive evidence exists to substantiate this. The whole site was not redeveloped, so it is quite feasible that her remains may still be there, potentially buried some 10+ feet down as deep burials were thought to prevent grave robbers.  Part of the redevelopment of that area now consists of dwellings.

Shortly after Dido’s death John left Ranelagh Street and moved to live at 40 Mount Street, Grosvenor Square, then nothing until we came across him being mentioned in the will of his employer, John Craufurd*, of Errol, Perth and Kinross who described John as his valet, leaving him a couple of bequests upon his death. Craufurd also provided a reference for Davinière’s son, Charles when he joined the Madras Army, so he clearly thought quite highly of the family.

The boys were clearly educated, as confirmed by a letter written by Charles’ tutor, as Mr James Carver, who had a private school, in Pimlico. They would have been taught, English, Greek, Latin and French, along with subjects such as accounts, land surveying, mathematics and drawing. Basically, all skills they would need to get a job in the military, finance or to go to university.

It appears that John didn’t remain single for very long, as he met and ultimately married his second wife, Jane Holland. The marriage took place in 1819 at St Martin in the Fields, but not until some years after they had produced a couple of children, Lavinia (1809-1888), who was born whilst they lived at Mount Street and Edward Henry (born 1812). This time the marriage was simply witnessed by two ‘serial marriage witnesses’, so no aristocracy present on this occasion.

Their daughter, Lavinia was to marry Louis Henri Wohlegmuth, a naturalised Frenchman in 1843 and confirmed her father’s name on the marriage register, but neither John nor Jane were present at the marriage as the newspaper confirmed that they had returned to John’s native town of Ducey, France, where John was to remain until his death on 31st March 1847.

Upon his death, he left his possessions to his wife Jane and named all four children – Charles, Guillame (William), Lavinia Amelia and Edward. The lives of the first three children are reasonably well documented, they were well-educated as a document dated 8th February 1811, relating to Charles confirms, but we know very little about Edward except that he travelled between Le Havre and England on 24th August 1837 which was quite possibly in order to be a witness at his half-brother, William Thomas’s marriage which took place in September of that year and was clearly still alive when his father died, but then seems to have vanished into the mists of time, but if anyone knows what became of him, we’d love to hear from you.

As there is no sign of either John’s widow, Jane or Edward the most obvious conclusion is that they remained in France.  The trail has, for now, gone cold on that front, but at least we are briefly able to add a little new information to the story of Dido Belle and John Davinière. (UPDATE – we have now found out some more about their life, so if you’d like to read our latest findings follow this link ).

To find out more about the painting of Dido Elizabeth Belle that first sparked our interest in her follow the highlighted link.

Dido Elizabeth Belle and John Davinière, what became of them?

Dido Elizabeth Belle – A new perspective on her portrait

The Eighteenth-Century Fashion for Turbans

An Eighteenth-Century game of ‘Degrees of Separation’

Who lived in these houses on Hertford Street, Mayfair?

15 thoughts on “Dido Elizabeth Belle and John Davinière, what became of them?” 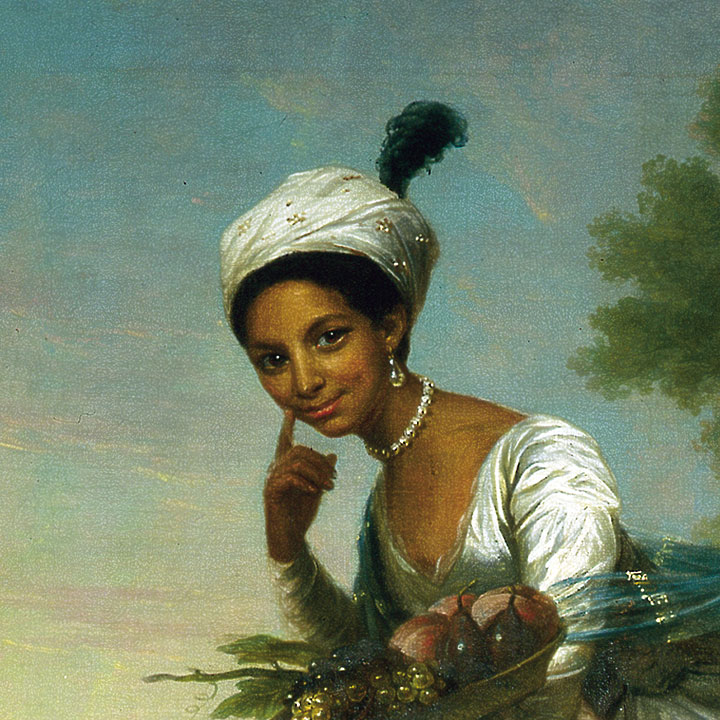