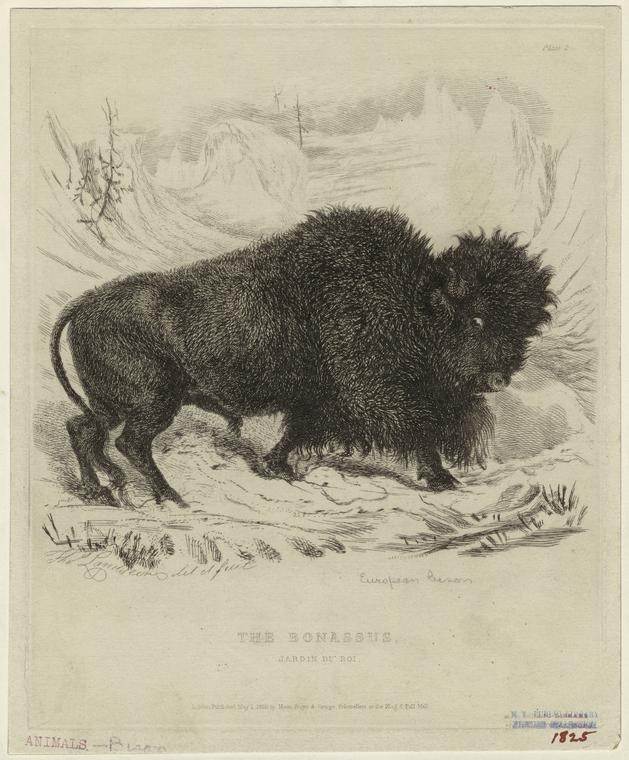 According to a book by John Barrow of 1749, the Bonassus was

a kind of wild ox, as high as a bull and bigger than a common ox. His flesh is very good. His horns are an astringent.

For a travelling fair owner, Earl James and Sons, the creature was far, far more than that very plain description. In the early 1820s Earl James acquired this amazing beast and described it in the following glowing terms:

This huge, terrific and extraordinary animal, which has, for the last eighteen months, occupied the attention of the naturalist, the historian and the whole of the cognoscenti and literati of the age and more particularly the inhabitants and visitors of the greatest metropolis in the world, who, from his hitherto unknown and unparalleled nature, has been the subject of editorial observations in the London newspapers. This most wonderful and interesting beast has been visited in London by upwards of 200,000 persons. In this wonderful phenomenon of nature is combined all the terrific grandeur of the animal creation: having the head of the elephant, the fore part of the bison, the mane and hind part of the lion, the eye on the cheekbone, and an ear similar to that of a human. He stands six feet high and weighs two tons! His consumption of daily food exceeds that of the elephant; he is not a carnivorous animal, but is particularly fond of fruit and vegetable; of the latter, he is most partial to onions and frequently consumes a bushel and a half at a meal.

Needless to say, there was great excitement whenever a new animal was brought to the country and this one was no exception. This extract below is from a letter written by a Mrs Winifred Lloyd to her friend Mr Price at the Parsonage House somewhere in Monmouthshire, which was published in the Devizes and Wiltshire Gazette, 16 May 1822. 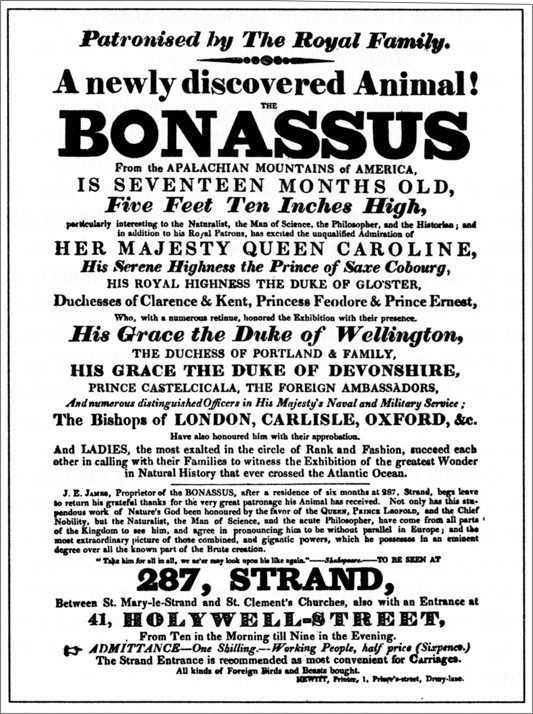 She began her letter by telling her friend that she and her children were having a wonderful time seeing everything London had to offer and added the following postscript which was published by the newspaper replete with her own unique spelling of words.

I forgot to say that we had seen Mr. Martin’s expedition, we went from the Bullock’s to the Bonassus, as it is but a step from wan to the other. The man says tis a perfect picter, and so it is, for sartain, and ought to be painted. It is like a bull, only quite different, and cums from the Appellation Mountings. My Humphry (son) thought it must have been catcht in a pound and I wundered the child could make such a natural idear, but he is a sweet boy, and very foreward in his larning. He was elely delited at the site you may be sure but Betty being tiresome shut her eyes all the time she was seeing it. But, saving his push now and then, the anymil is no ways veracious and eats nothing but vegetables. The man showed us some outlandish sort of pees that it lives upon, but he gave it two hole pales of rare carrots besides. It must be a handsome customer to the green grocer and a pretty penny I warrant it costs for vittles’.

However, not everyone was quite so enamoured with the creature, as this letter reprinted in the John Bull of January 1824 confirms.

‘Gentlemen, I am sorry to trouble you but I am so annoy’d by next door neighbour the Bonassus and with beasts, that cannot live in my house, for the stench of the beast is so great and there is only a slight petition betwixt the houses and the beast are continually breaking through in my different rooms and I am always losing my lodgers in consequence of the beast first a monkey made its way in my bedroom, next the jackall came into the yard and this last week the people in my second floor have been alarmed in the dead of night by the monkey breaking through into the closet and are going to leave in consequence, this being the third lodgers I have lost on account of the beast and I have been letting my second floor at half the rent – and those men of Mr James are bawling the whole day against my window and continually taking people’s attention from window – and I am quite pestered with rats and I am confidence they came from the Exhibition and in short the injury and nuisance is so great as almost impossible to describe, but to be so annoy’d by such an imposter I think is very hard – Gentlemen your inquiry will oblige. Your servant T.W. And if I mention anything to Mr. James he only abuses me with the most uncouth language’.

A claim for compensation if ever there was one!

One thought on “The Bonassus”