As we haven’t written any fashion related posts for a while we thought it might be interesting to look at both clothing and paintings showing the vast array of colours worn in Georgian fashion, but, as our regular readers will be aware we got side-tracked when we realised that there were relatively few outfits and paintings of people wearing the colour green and we wondered why, so began to investigate!

We wondered whether it simply wasn’t a fashionable colour amongst the Georgians, but then, having looked at the way in which the colour is produced we soon realised that one possible explanation could be due to the process and the elements involved, thereby making the cost of it more expensive than to produce other dyes, in turn making it only available to the wealthy. There also appear to have been issues with achieving a bright and even colour. Green also seemed virtually impossible to make colourfast – green skin would not have been a good look, as one of us who shall remain nameless knows all too well, having bought a beautiful long, vibrant green skirt to wear on the beach only to find that for some strange reason it wasn’t colour fast … we’ll  leave that thought to your imagination!

Green dye could be obtained in a variety of ways such as using plants like grass or nettles for a lively green – common broom, heathers or iris for dark greens. Alternately, a product called copperas also known as could be used, Verdigrease (now know as Verdigris) or Alum.

We came across this book written in 1735 ‘The Gentleman’s Companion and Tradesman’s Delight. Containing, the mystery of dying in all its branches’ which provides us with some recipes for dying fabric green.

To dye a fair green

Take Bran Water and Alum, a gallon the former to a pound of the latter, and boil them up till the Alum is dissolved; then let your silk or cloth lie therein for about a quarter of an hour, then take more Bran Water and a few handfuls of Woad, and put it therein till it become a dark yellow; then add Verdigrease and Indigo of each half a pound or more or less of the one or the other, as you would have it lighter or darker.

To colour a light green

Take the herb called Horse Tail, bruise it and add to the juice a small quantity of Verdigrease, Alum and Copperas, and over a gentle fire, make it into a colour, which will prove very pleasant and delightful.

The School of Wisdom; or repository of the most valuable curiosities of art & nature of 1788 provides the following recipe for creating a lasting green

Boil three quarters of a pound of alum, half a pound of tartar, into quarts of sharp ley for an hour, and in it soak the thread for three hours, keeping it hot all the while: how to dye it yellow: put into the kettle eight pounds of broom, one pound of corn marigold flowers, half a pound of crab-tree bark, that looks yellow and ripe, and add two quarts of sharp ley: when these have boiled half an hour, then dye the thread in the liquor as deep a yellow as possible: but if you can procure Spanish Yellow, an addition of three quarters of a pound of it will heighten the dye, and render it more lasting, for it is to be remembered, that all yellows that are designed to be dyed green, must be as deep as possibly can be. After this turn it green with blue dye. You may blue the thread with Woad, else with indigo, being first thrown into the alum suds, and afterwards into the yellow, and you will have a lasting green, so that a green dye is to be dyed several ways. 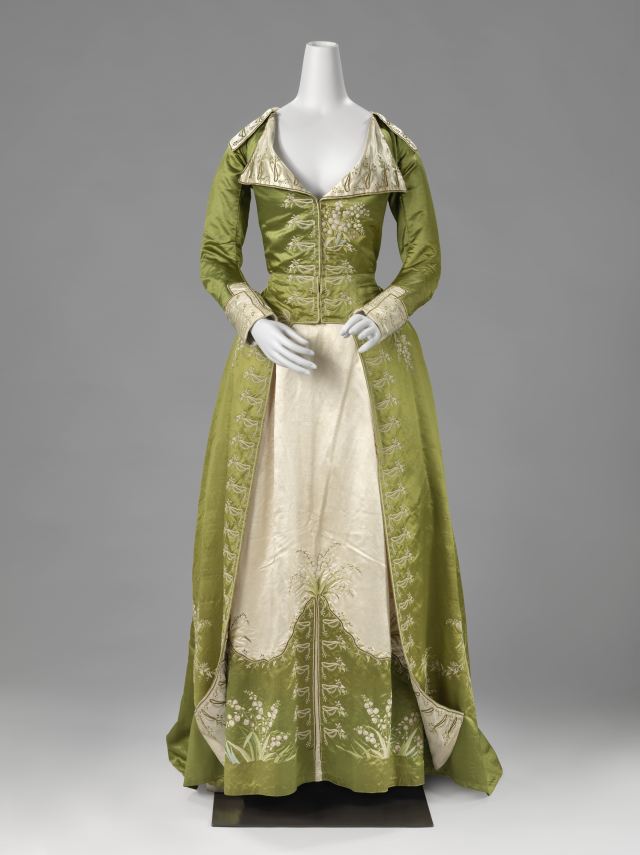 First dye your silk a pretty deep straw colour, rinse it clean and wring it close together with sticks; and then put your silk into the blue dye copper: though you must take care that the strength of the dye be proportioned to the quantity of silk, and that you do not put in too much silk at once.  When it has boiled enough take the kettle off, and let it stand for an hour, after which time you may work it again, and do the same every hour allowing the same interval, but you must be very careful that one handful of silk does not lie longer in than another, and when it is taken out of the copper, let it be very well cooled, rinse and strongly wring with sticks and afterwards dried.

To dye a parrot or parroquet green

This must be dyed as the green, only the last suds must be encouraged with a little Provence wood suds, till it is deep enough; then wring it out as above.

30 thoughts on “Was green fashionable in the 18th century?”