We would once again like to welcome back to our blog, Classics teacher and author of  The Elephant of Exeter Change: A Tale of Cruelty and Confinement in Georgian London, William Ellis-Rees.

William’s guest post this time has as its subject, Empress Josephine, the wife of Napoleon Bonaparte.  Josephine is of course extraordinarily famous, and many biographies of her have appeared over the years.  However, William’s research has unearthed a curious story which does not appear in the standard works, and which sheds light on a fascinating corner of her life. His fascinating book tells more about her obsession with the collecting of animals and plants, Josephine in the Mountains: The curious story of the Empress’s journey from Paris to the Alps.

For most visitors to Paris, the château of Malmaison will not be high on their list of must-sees.  There are perhaps more obvious attractions: museums and churches, the Seine and its bridges, the grand boulevards and the romantic back-streets.

But Malmaison, bought by Napoleon Bonaparte and his wife Josephine in 1799, is for those who make the pilgrimage to the outskirts of the city quite simply fascinating.  I first fell under its spell many years ago when I embarked on extensive researches into its history, and I still find that it has the power to evoke the atmosphere of the Consulate and the First Empire.  The château is crammed with images of Napoleon’s military exploits, and the furniture and furnishings showcase the opulent decorative style he made fashionable.

But above all it is Josephine’s role in this particular story — a role made possible by her ambition and energy — that gives Malmaison its special appeal.

Josephine, who is not always remembered in the most favourable light, was, in fact, a very considerable connoisseur of landscaped gardens.

She employed a succession of designers to lay out the park of Malmaison in the ‘English’ style, which called for purling streams, follies and toy farms and apparently natural arrangements of trees and plants.

Josephine was in her element.  She used her influence and wealth to turn Malmaison into the centre of an extensive scientific network, along which plants flowed into Paris from the furthest corners of the earth, and then, once acclimatised in her magnificent glasshouses, out to municipal gardens in every region of France.

She collected animals, too, and her exotic creatures turned the park into something not unlike an Old Master’s vision of the Garden of Eden.

Josephine’s interest in natural history found triumphant expression in her patronage of the 1800 expedition to Australia, which Europeans then called New Holland.

The expedition, sailing in two ships, was led by a seasoned captain, Nicolas Baudin, but he clashed with members of the scientific team — the mariner and the intellectual were not obvious travelling companions!  Although the voyage was arduous, New Holland proved to be a land of almost magical beauty, and the ships carried back to France a rich haul of exciting new plants and animals.  These had been earmarked for the Jardin des Plantes in Paris, but Josephine was quick to claim her share.  And so it was that the glasshouses at Malmaison boasted numerous New Holland species.  So it was, too, that black swans floated on the ‘English’ river, and kangaroos hopped about their enclosure in the park.

Journey to the mountains

Josephine shared with many of her contemporaries a passion for mountain landscapes — she built a Swiss chalet at Malmaison and kept a herd of Swiss cows — and in 1810 she set off for the Alps.  She had only recently been divorced by Napoleon, and her journey to the mountains may be seen as in some sense deeply personal, and maybe even as a spiritual process of self-discovery.  Given the circumstances — she had been rejected in favour of the powerfully connected Marie Louise — Josephine must strike us as a rather forlorn figure.  Even so, she travelled with a graceful entourage and was fêted along the way.

One day a young man by the name of Joseph-Louis Bonjean was introduced to her.  What happened as a result of this meeting is an intriguing story, and, if you want to find out more, I would urge you read my recently published Josephine in the Mountains!

Suffice it to say here that for one of the two travellers, the illustrious Josephine and the humble Bonjean, nothing was ever the same again.  As one might expect, they later went their separate ways, but, as I show in my book, Bonjean’s name was not entirely lost.  What we have here is perhaps not the obvious story of Josephine.  My concern is not principally her rise to prominence, nor her marriage to and her divorce from Napoleon.  My story is about another — the other — Josephine. 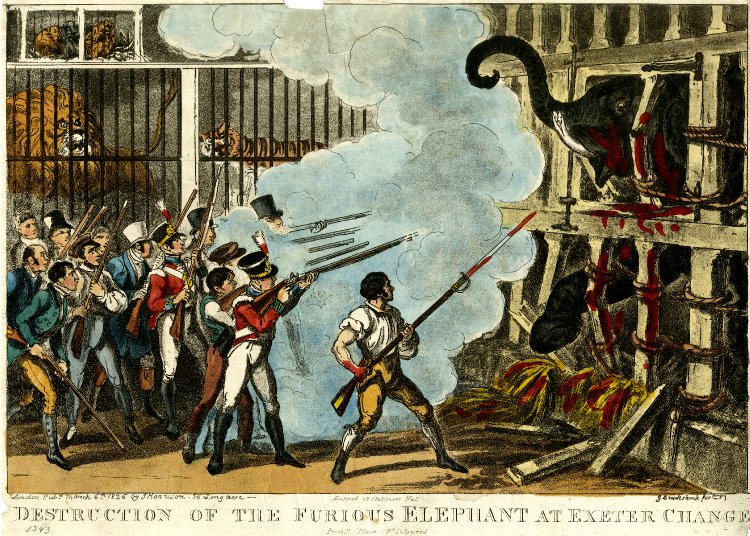 We are delighted to welcome another new guest to All Things Georgian: William Ellis-Rees. William is a Classics teacher with a serious sideline interest in researching and writing on lesser known historical topics. Having published articles on various subjects in Country Life, Garden History and the gardening journal Hortus, he is now about to publish a book on Josephine Bonaparte, which, far from being a full-blown biography of the Empress, sheds light on a fascinating corner of her life and William is also working on another book, in which he returns to nineteenth-century London and its environs to tell the true story of a tragedy that shocked the nation.

Today, William is here to tells us a little more about his book, The Elephant of Exeter Change: A Tale of Cruelty and Confinement in Georgian London, which is available from Amazon as an e-book (follow the highlighted links to find out more). With that, we will hand you over to William to share some more information.

How odd to think that a restaurant and a coffee shop in London’s Strand, almost opposite the Savoy Grill, were once the ramshackle building known in the early nineteenth-century as Exeter Change.

At street level the Change—short for “Exchange”—comprised a jumble of shops and stalls selling walking sticks and umbrellas, suitcases and saddles, corkscrews and combs and any number of other useful items.  Above these was a menagerie, and even now, long after I started work on this hidden corner of London history, the bizarre notion of caged animals floating above a crowded city street surprises and delights me.

The elephant on the first floor

The elephant at the heart of the story travelled to England from Kolkata (Calcutta at the time) on board an East India Company ship in 1811.  The ship’s captain, Robert Hay, who had been horribly injured in an encounter with French warships off Mozambique, was an honourable man, and he kept a protective eye on the elephant even after he returned and sold it to a theatre.  The London stage was the elephant’s first taste of fame, but its unwelcome celebrity was only truly established when in 1812 it passed into the hands of Stephen Polito, the owner of the menagerie at the Change.

The animals in the room above the Strand not only entertained and frightened the paying public: they also satisfied a curiosity about the world that lay beyond England’s shores.

Stephen Polito, and the man who took on the menagerie in 1814, Edward Cross, were a distinctly nineteenth-century phenomenon.  Whereas they presented themselves as respectable businessmen, and scientists of a sort, others regarded  them more accurately as dealers and showmen.  Polito and Cross certainly knew about animals, but they were not exactly naturalists: they were motivated by profit, and their exhibits were kept in cramped conditions, and were often treated cruelly.  Even so, the taste for the exotic they profited from cut across many social divides, and Cross in particular, in his capacity as an importer and supplier, enjoyed the patronage of a number of highly distinguished clients.  So when he was snubbed by the London Zoological Society, who refused to buy his animals, he founded a rival establishment in what is now South East London with the help of powerful backers.  There is a splendid portrait of Cross in his sixties, with a lion cub in his arms and a silk top-hat balanced on his head.  He had transformed himself from Georgian impresario into early Victorian man of means—quite a success story.

On the subject of the London Zoological Society, an important figure in the story is Thomas Stamford Raffles.

Although principally known to history as the founder of colonial Singapore, Raffles was also the prime mover of the new zoo, the birth of which in 1826 was not unrelated to the elephant’s tragic end.  And it is at this moment that the extraordinary Joshua Brookes makes his entry.

Brookes was a renowned London anatomist, although his image suffered from his dealings with the notorious resurrectionists.  For details of his unique contribution to the story, I would like to refer you to my book, The Elephant of Exeter Change! Suffice it so say that Brookes found an unexpected solution to the problem of an elephant that had grown—as all young elephants do in time—to a colossal size.

In conclusion, researching the events of 1826 was a fascinating task: they were widely reported in newspapers and journals, and the commercial illustrators enjoyed a field day.  But the elephant left other traces of itself—in playbills, in a jingle advertising boot polish, in a drawing-room song.

There is even a small but gruesome relic in a museum in East Anglia.  The real discovery, though, was the cast of characters: the elephant itself, the one or two heroes and the several villains, and last, but by no means least, the ever-changing backdrop to a story that begins in the Indian Ocean and ends in some of the darker recesses of Georgian London.

Destruction of the furious elephant at Exeter Change. Courtesy of the British Museum