Well, Valentine’s Day is fast approaching so it’s the perfect time to find your soul mate. The Georgians were no different – they believed that they had to pull out all the stops to find the person of their dreams, so forget internet dating and give some of these a go! Please feel free to let us know if you tried them with success!

These suggestions come courtesy of a Miss Arabella Whimsey (draw your own conclusions on that one) who apparently wrote to the editor Mr Town on the 17th February 1755, despite our best attempts we have not managed to locate such a young lady!

You must know I am in love with a very clever man, a Londoner; and as I want to know whether it is my fortune to have him, I have tried all the tricks I can hear of for that purpose.

I have seen him several times in coffee-grounds with a sword by his side, and he was once at the bottom of a tea-cup in a coach and six with two footmen behind it.

I got up last May morning and went into the fields to hear the cuckoo; and when pulled off my left shoe, I found a hair in it, exactly the same last Midsummer Eve.

I and my two sisters tried the Dumb Cake: you must know of it, two must make it, two bake it, two break it and the third put it under each of their pillows (but you must not speak a word all the time). This we did, and to be sure I did nothing all night but dream of Mr Blossom.

The same night, exactly at twelve o’clock, I sowed hempseed in our backyard and said to myself ‘Hempseed I sow, Hempseed I hoe, and he that is my true love, come after me and mow’. Will you believe me? I looked back and saw him behind me, as plain as eyes could see him.

After that I took a clean shirt, and turned it, and hung it upon the back of a chair; and very likely my sweetheart would have come and turned it right again (or I heard his step) but I was frightened and could not help speaking, which broke the charm.

I likewise stuck up two Midsummer Men, one for myself and one for him. Now if he had died away, we should never have come together: but I assure you he bowed and turned to me.

Our maid Betty tells me that if I go backwards without speaking a word, into the garden upon Midsummer’s Eve and gather a rose and keep it in a clean piece of paper until Christmas day, it will be as fresh as in June and then if I stick it in my bosom then he who is to be my husband will come and take it out.

Last Friday, Mr Town, was Valentine’s Day and I’ll tell you what I did the night before.

I got five bay-leaves and pinned four of them to the four corners of my pillow and the fifth to the middle; and then if I dreamt of my sweetheart, Betty said we should be married before the year out.

But to make it more sure, I boiled an egg hard and took out the yolk and filled it up with salt; and when I went to bed I ate it shell and all, without speaking or drinking after it and this was to have the same effect as the bay leaves.

We also wrote our lovers names upon bits of paper and rolled them up in clay and put them in water and the first that rose up was to be our Valentine. Would you think it?

Mr Blossom was my man: and I lay in bed and shut my eyes all the morning, till he came to our house, for I would not have seen another man before him for all the world.

Dear Mr Town, if you know any other ways to try our fortune, do put them in your paper. My Mamma laughs at us and says there is nothing in them; but I am sure there is, for several Misses at our boarding school have tired them and they have all happened true.

The Lover, or Cupid’s Mirror

We realize that some of the pictures are slightly out of our usual time frame, but we simply had to include them. 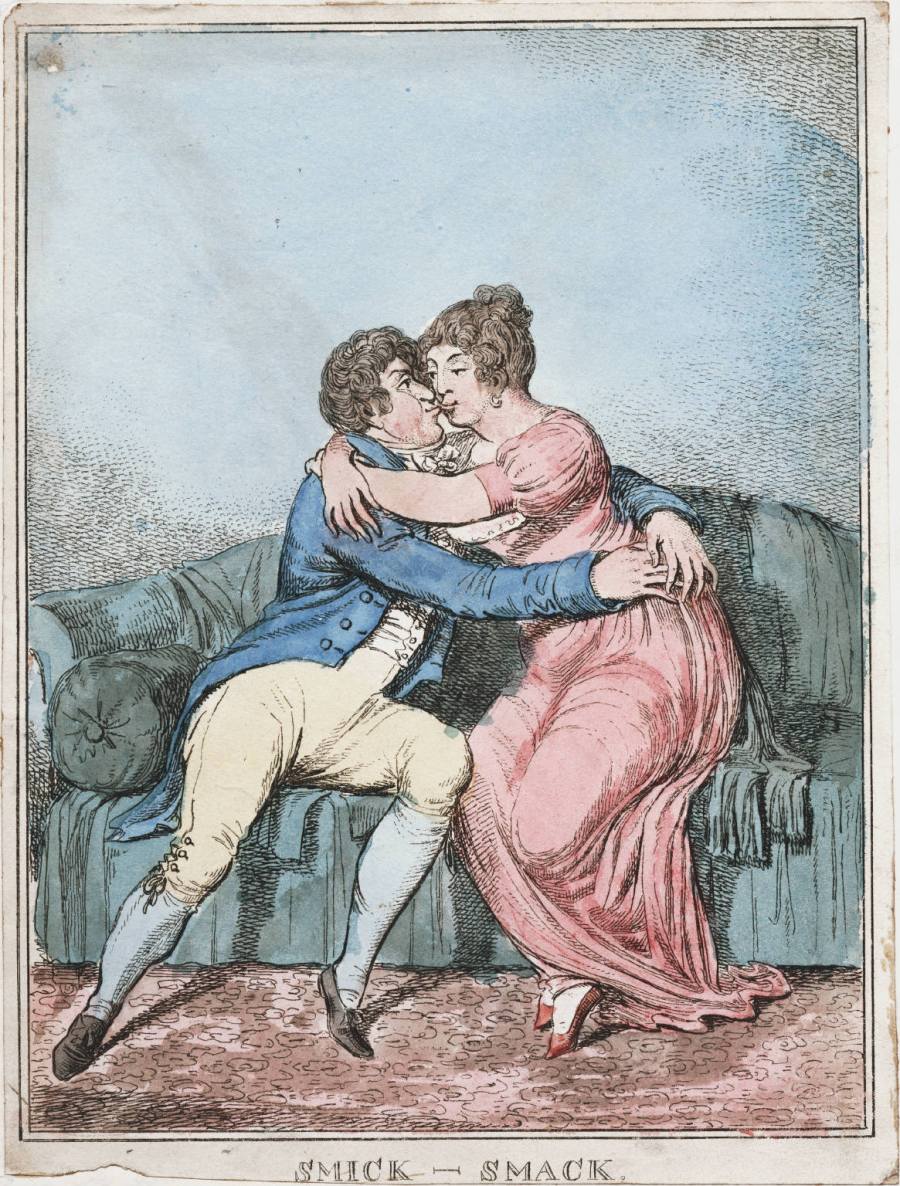 There were many different customs and traditions surrounding Valentine’s Day, one of which baffled the unsentimental writer of this letter to the newspaper.

Amongst many customs useful and ridiculous which have been handed down to us from our Ancestors, I lately observed one of drawing Valentines, on the Evening preceding Valentine’s Day, which was much in this Manner, the Boys collected all the names of females (unmarried) they could remember, and wrote them separately upon little tickets or bits of paper, which were put into a hat and shaked about for some time, when each of them drew one of these out, and the next day sent a kind of poetical epistle to the girl who was his Valentine or Lot.  I confess the meaning of this is extremely strange to me at present, as I cannot see any thing in it useful or entertaining.  I should therefore be greatly obliged, if any Correspondent of your’s would favour me with a reason for this superstitious ceremony.

February the 14th was a popular and romantic day for a wedding whether they were unusual, unsuccessful or happy.

Thursday one Mrs. Mann, aged upwards of 60, who keeps a Cook and Chandler’s Shop in Shoreditch, was married to a Soldier quartered in that Neighbourhood, aged about 22.  Being asked by a Neighbour how she could think of Marriage at those Years?  She replied it was Valentine’s Day, and she was resolved to be coupled.  The old Gentlewoman had, by her Frugality and Industry, collected upwards of 200 l. which she freely bestowed on her new Lover.

It may be worth remarking, that on last Valentine’s Day, a couple were married in St. Peter’s Church, Derby, who had between them seven thumbs, viz. the woman three, and the man four.

WINCHESTER, JULY 21.  At our assizes a cause was tried between Sarah Stephens, of Newport, in the Isle of Wight, aged 24, plaintiff, and Mr. Spencer of the same place, aged 65, defendant.  This cause occasioned much diversion in the court.  The happy pair had agreed, it seems, to unite in the soft and pleasing bands of Hymen on Valentine’s day last; a day conceived by them to be most propitious to love and the union of lovers; but unfortunately the demon of discord interfered.  The old gentleman’s age and unwieldy figure, contrasted with the youth and genteel appearance of the lady, afforded an ample field for wit and humour, and the laugh went much against the unfortunate gentleman.  But what was still more against him, the Jury gave a verdict in favour of the lady for 400 l. damages, with costs of suit.

On Valentine’s Day set out from Stamford, in Lincolnshire, on a matrimonial trip to Gretna Green, Mr. Charles Wales, printer, lately of Bury St. Edmund’s, with Miss Eliza Booth, second daughter of Mr. Booth, wine and spirit merchant, of the former place. – The far-famed Hymen of the Northern border having indissolubly entangled the happy pair in his silken bonds, they returned to Stamford on Sunday last, and their nuptial bliss was consummated with the blessing of the lady’s opulent friends!

In 1797 a booklet had been published titled ‘The Young Man’s Valentine Writer’ which listed romantic verses which could be copied out by those with little poetic skill and sent to their sweethearts. Later printers began to mass-produce printed verses and cards. While these lacked the personal touch of a handwritten note it did mean that they could easily and cheaply be sent anonymously via the postal service. Valentine’s Day proved to be a busy one for early 19th century postmen.

Yesterday being Valentine’s day, the whole artillery of love was put into requisition.  The Postmen were converted into Cupids, and instead of letters upon business, carried epistles full of flames, darts, chains, and amorous declarations.

We end with a Valentine’s Day poem addressed to the lucky Miss F____ of Winchester by an anonymous admirer who used the Hampshire Chronicle newspaper rather than the post to proclaim his love.

I only sing one blooming fair to gain;

Adieu, ye muses, if she will not hear.  HAMMOND

And every common form some breast may move;

Some in an air, a look, a shape, find charms,

To justify their choice or boast their love: –

But, had the great Apelles seen that face,

When the beauteous Cyprian goddess drew,

He had neglected all the female race,

Thrown his first Venus by, and copy’d – YOU.