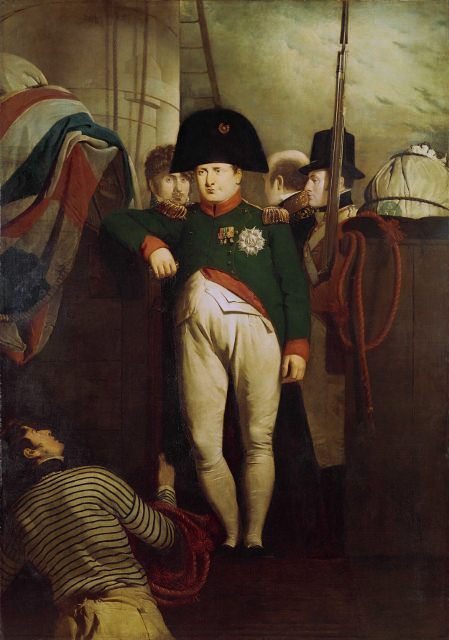 We would very much like to welcome our latest guest, Shannon Selin who has so very kindly offered to write an article about Napoleon and the Prince Regent for us.  Shannon is the author of Napoleon in America, which imagines what might have happened if Napoleon had escaped from St. Helena and wound up in the United States in 1821. She blogs about Napoleonic and 19th century history at shannonselin.com.  Shannon’s book is available from Amazon in paperback or from Amazon  as an E-book by clicking on the links.

There has recently been publicity about the letter Napoleon Bonaparte wrote to King George IV (then the Prince Regent) requesting asylum in England after his 1815 abdication from the throne of France. The letter, which is on display at Windsor Castle as part of the commemoration of the 200th anniversary of the Battle of Waterloo, reads:

“Royal Highness, Prey to the factions which divide my country, and to the enmity of the greatest powers of Europe, I have terminated my political career, and I come, like Themistocles, to seat myself at the hearth of the British people. I put myself under the protection of their laws, which I claim from your Royal Highness, as the most powerful, the most constant, and the most generous of my enemies. Rochefort, 13 July 1815. Napoleon.”

Before writing this, Napoleon said to his advisors, “I am not acquainted with the Prince Regent; but from all I have heard of him I cannot avoid placing reliance on his noble character.” According to Lord Holland, on reading the letter the Prince Regent reportedly said, “Upon my word, a very proper letter: much more so, I must say, than any I ever received from Louis XVIII.” These words are surprising in the context of Prinny’s general view of Napoleon.  Member of Parliament Samuel Whitbread wrote in April 1814: “I hear [the Regent] says I am the worst man God Almighty every formed, except Bonaparte….”

The Prince Regent detested Napoleon and was a great supporter of France’s Bourbon monarchy. During Napoleon’s reign, he provided refuge in the UK for Louis XVIII and his family. Prinny openly advocated the return of the Bourbons to power, in contrast with the more cautious approach taken by his cabinet. Britain’s foreign minister, Lord Castlereagh, feared that Britain’s European allies would regard British patronage of the Bourbons as an attempt to scuttle the 1814 peace negotiations with Napoleon. To get around this, the Prince Regent made a personal overture to Russia’s Tsar Alexander, through Russian ambassador Prince Lieven, entreating him to dethrone Napoleon.

Not surprisingly, Napoleon’s 1815 request for British asylum was refused. Napoleon was instead exiled to the island of St. Helena, where he remained until his death in 1821. For a while Napoleon continued to harbour illusions that Prinny had no particular dislike of him. He blamed his exile on those surrounding the Prince. He told British Admiral Pulteney Malcolm that “if old George [III] were well he would have been better treated, he was not so much in the hands of his ministers as the Regent; besides, he would have seen the bad consequences to royalty of debasing a person who had once worn a crown by the choice of a nation. The Regent should remember the flattering messages he sent to him at the Peace of Amiens.”

Napoleon considered writing to Prince George from exile. When he learned that the letter would be opened and read by British officials before it was delivered, he decided not to, considering that inconsistent with both his and the Regent’s dignity.

Napoleon was not entirely unaware of Prinny’s true character. Pressing Admiral Malcolm for details about English drinking habits, Napoleon said, “It was the fashion when the Prince Regent was young. I have been told he sometimes sat at table till he fell off his chair; was it not so?”

Napoleon also thought it strange that the Prince Regent should choose as his mistress the Marchioness of Hertford, a lady who was over fifty and already a grandmother. “It appears that you like old women in England.” 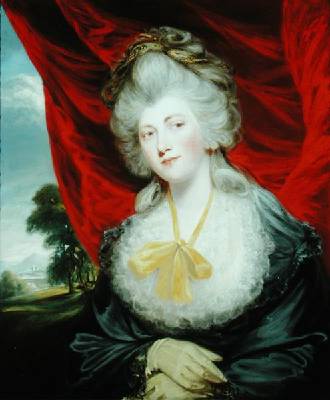 The longer Napoleon sat pondering his fate, the more it dawned on him that the Prince Regent might not be his advocate. He told his companion General Gourgaud, “When Louis XVIII dies, great events may take place; and if Lord Holland should then be Prime Minister of England, they may bring me back to Europe. But what I most hope for is the death of the Prince Regent, which will place the young Princess Charlotte on the English throne. She will bring me back to Europe.”

In the end, Napoleon was probably not far off thinking the thoughts the caricaturist George Cruikshank puts in his mouth as he addresses Prinny, the “Sun”: “To thee I call— But with no friendly voice, & add thy name—G—P—Rt!. to tell thee how I hate thy beams, that bring to my remembrance from what state I fell &c.” 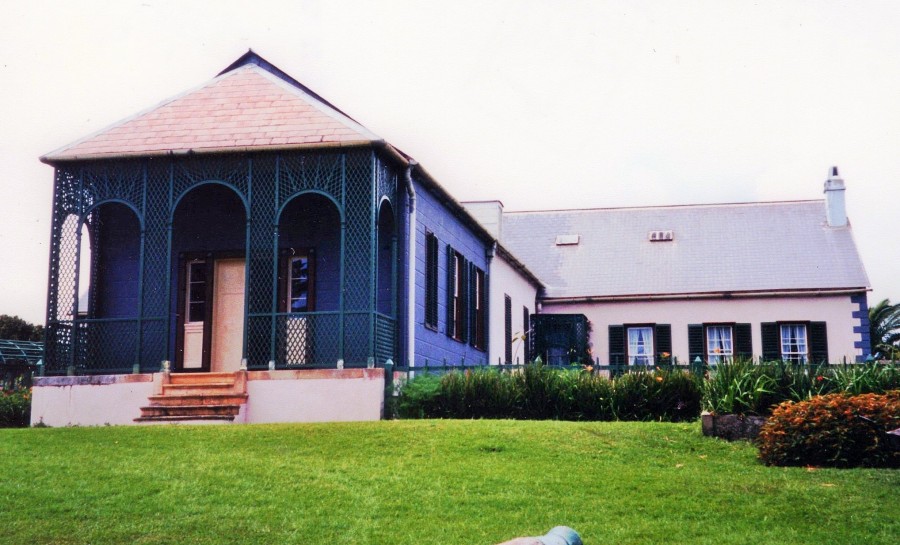 It is an absolute pleasure to welcome our lovely guest author, Lally Brown  to our blog. She has recently written a book about the amazing life of the Countess Françoise-Elisabeth Bertrand (Fanny Dillon) which is now available to download from Amazon.

Countess Françoise-Elisabeth (Fanny) Bertrand was tall, attractive and charming. An aristocratic lady fond of the latest fashions she was popular, and is said to have possessed ‘a hot and passionate nature’.

Fanny was born on the island of Martinique in the French West Indies. Her mother was a wealthy widow who had married General Arthur Dillon, a British Aristocrat in the service of France. When Fanny was nine her father was imprisoned and subsequently guillotined during the French Revolution.

Her mother’s cousin was the celebrated Empress Joséphine, Napoleon’s first wife. As a result of this connection Fanny found herself treated as a favoured relative by Napoleon and her life became inextricably bound with his.

When she was twenty-three Napoleon arranged for Fanny to marry one of his Generals (later to become his Grand Marshal of the Palace). Fanny was not at all keen. Her suitor, Count Henri-Gatien Bertrand, was thirty-five, boring, and (in Fanny’s opinion) not particularly handsome. She remonstrated with Napoleon ‘But Sire’ she protested ‘Bertrand! The Pope’s monkey to the life!’  However, Napoleon insisted, signing the contract and providing a generous dowry and property. They were married at the home of Queen Hortense on 16th September 1808.

Despite her initial misgivings Fanny was very content with her husband. They were, said friends, ‘Well suited’. Henri was placid, kind and attentive, the perfect balance to Fanny’s more impetuous temperament. He called Fanny ‘My Fiery Creole’. They had five children in the twenty-eight years of their marriage.

All was well until Napoleon’s downfall. First Elba and then Waterloo. Napoleon gathered his Generals around him and planned, initially to go to America. But it was not to be. Hoping to live in seclusion on a country estate in England, Napoleon gave himself up to the British.

Count Bertrand, Fanny and their three children were on board HMS Bellerophon when Napoleon was informed he was being exiled as a Prisoner of War to the remote island of St. Helena in the South Atlantic Ocean. Fanny was distraught. She knew her husband would insist on accompanying his beloved Emperor and she would be obliged to go with them. She burst into Napoleon’s cabin, made a terrible scene, and attempted to throw herself overboard.

But calmed by Henri and assured the exile ‘would not be for long’ Fanny reluctantly agreed to accompany her husband. She suffered greatly from sea sickness on the sixty-seven day voyage and should have been relieved to sight land. I would like to tell you what Fanny said to Napoleon when she saw St. Helena for the first time from the deck of HMS Northumberland, but it is entirely unsuitable for printing in the refined pages of All Things Georgian.

Fanny hated St. Helena. She begged her husband to leave and several times the British offered them the opportunity, but each time Napoleon persuaded Henri to stay. Fanny gave birth to her fourth child, Arthur, on the island, but she also suffered several miscarriages. It was after her last, near fatal miscarriage, that Napoleon finally agreed to their departure, shortly before his death. Fanny was at his bedside with her husband and children when Napoleon died on 5th May 1821.

After almost six years in exile with Napoleon on St. Helena, Count Henri-Gatien Bertrand was granted amnesty on 24th October 1821, his titles and property restored. The family returned to France and on the 6th July 1823, Fanny was safely delivered of a son, Alphonse.

I became involved with the fascinating Fanny several years ago, when the British Government sent my husband to St. Helena on a two-year contract. Our accommodation was the house built for Count and Countess Bertrand in 1816, just across the road from Napoleon’s Longwood House.

The French Consul on St. Helena, who at that time lived in Longwood House, was my close neighbour. He asked me to help transcribe primary-source archive material relevant to Napoleon’s exile on the island. I became totally engrossed in the research, enthralled by this ‘Palace in Exile’. This little French community of Generals, their wives, children and servants, was dominated by the demands of Napoleon and constrained by restrictions imposed upon them by Lord Bathurst in London, implemented on island by the unsympathetic Governor Sir Hudson Lowe.

I felt enormous sympathy for Countess Fanny Bertrand and found myself compelled to tell the moving story of her life on St. Helena. The result is ‘The Countess, Napoleon and St. Helena – In Exile with the Emperor 1815 to 1821’. Compiled as Fanny’s Diary and conscientiously following the dates and content of the original archive documents, it is an accurate non-fiction account of Fanny’s years on St. Helena.

As a counterpoint to Fanny’s story I have scattered through her Diary a few chapters of my own life on this remote British Overseas Territory in the middle of the South Atlantic Ocean.

I hope you enjoy it!