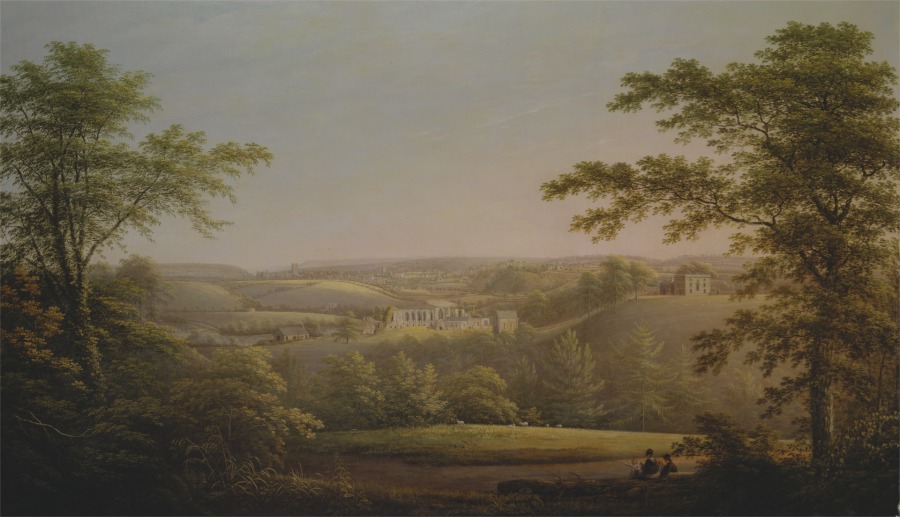 What an amazing aquatint of a woman I would love to have met. It was produced after her death, but it’s full of such character, but who was she?  Her name was of Isabella, known to all as Tibby Tinkler.

The image itself does provide a few clues about her. We know that she was a bookseller in the town of Richmond, North Yorkshire and possibly the very first in Richmond and that the image above by George Cuitt, of Richmond, tells us that it was produced after her death in 1794 when she was aged 92.

Now, firstly, was she really 92 when she died? well yes, for a change we know that this to have been accurate.

She was born Isabel, rather than Isabella Foster, and her baptism tells us that she was baptised on 15 June 1702 in Richmond, North Yorkshire, her father being named as Francis, so perhaps she simply preferred the extended name, so we’ll continue to use that.

Isabella was the middle of five children, her siblings being Mary, Ann, Elizabeth and Menhill. On 30 July 1732 she married Robert Tinkler and the couple lived in Richmond for the rest of their lives, although Robert originated from Darlington, North Yorkshire.

For how many years they owned and ran the bookshop is unclear, but Isabella was definitely trading under her own name, in August 1769, according to the Newcastle Courant, which was quite unusual for a woman of that period and her name stands out here, as the only woman listed. 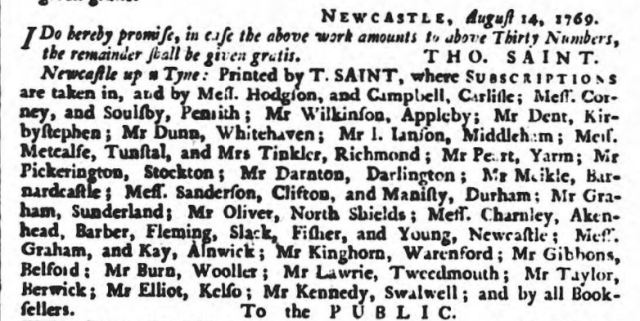 We know that Isabella was widowed April 1782 and that her husband Robert was buried in the parish church which would have meant that Isabella was left to continue running the book shop alone, as they had no children to help her.

In Harry Speight’s book, Romantic Richmondshire, written in 1897, Isabella was described as being:

Quite a character in her way. Her real name was Isabella Tinkler, but she was always known as ‘Tibby’ and few in her trade knew more of books, their histories, mysteries, prices current etc. George Cuitt, the artist etched her portrait in a characteristic attitude in her shop.

On 29 April 1791, Isabella sat down and dictated her last will and testament. She was clearly unable to write as she marked it with a X, the standard way to sign your name if unable to write it, which begs the question as to whether she could read – an interesting thought in light of her occupation or maybe her inability to write her name was simply down to her age.

Isabella made provision for what appears to be quite a number of friends, so she was obviously a popular woman.  She named some 14 people in her will leaving them a variety of sums of money, from one guinea to ten guineas each and named an Isabella Brough, who lived with her, as her executrix and to Isabella she left the remainder of her goods and effects, but no explanation as to who she was, a servant, nurse or simply a friend.

Another indication that she was well known being that the Newcastle Courant of 11 October 1794, published news of her demise.

If anyone knows anything more about her, I would love to hear from you.

Easby Hall and Easby Abbey with Richmond, Yorkshire in the Background by George Cuitt (1743-1818) 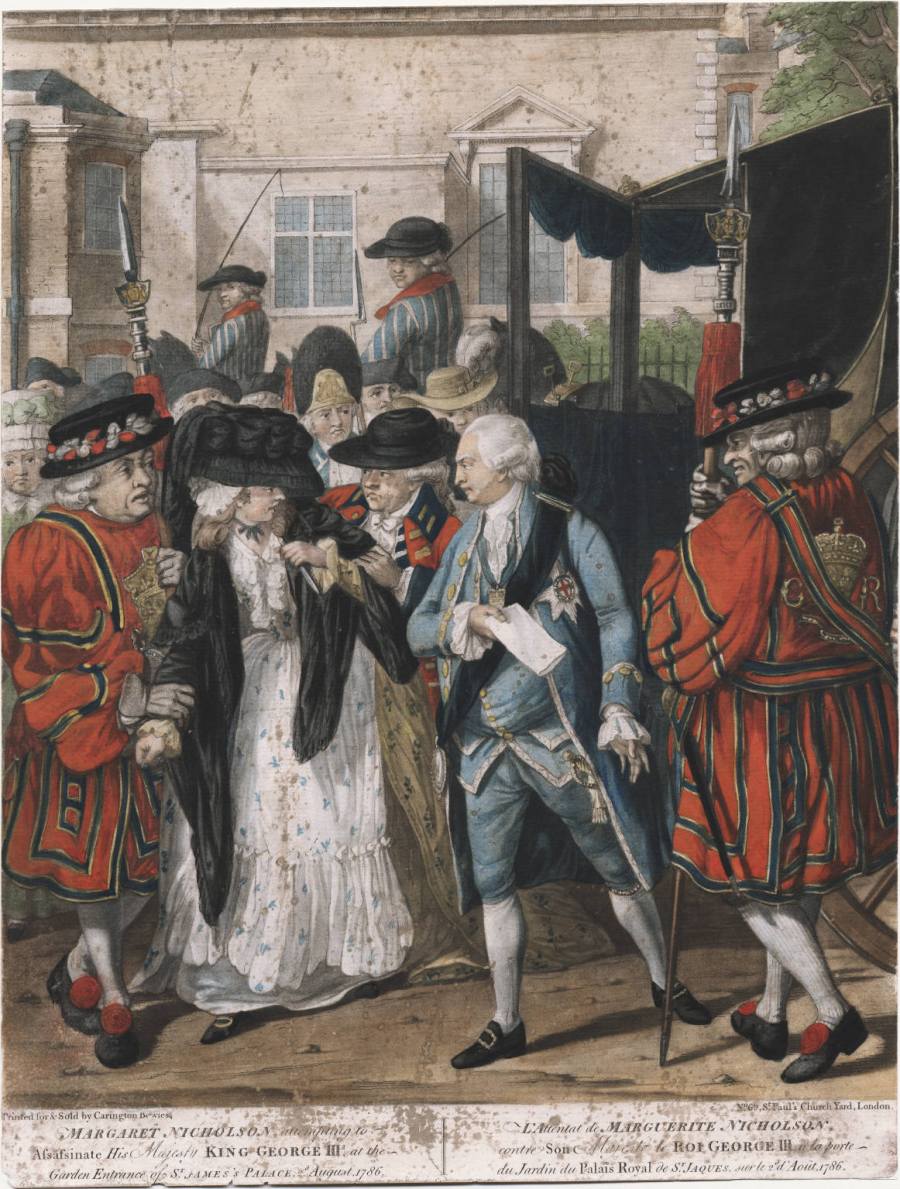 On the 2nd August 1786, a woman named Margaret Nicholson was arrested for making an attempt on the life of King George III. Judged to be insane, and committed to Bedlam for the remainder of her life, it turned her into an instant celebrity. No fewer than five hastily printed books and pamphlets proclaiming to be accounts of her life were printed and rushed out for sale, one of these being written by her landlord, Jonathan Fiske, who was conveniently a bookseller and stationer. These books, even Fiske’s, were largely copied from the newspaper reports which appeared after the assassination attempt and salacious gossip and incorrect facts were copied time and again, and still persist today. 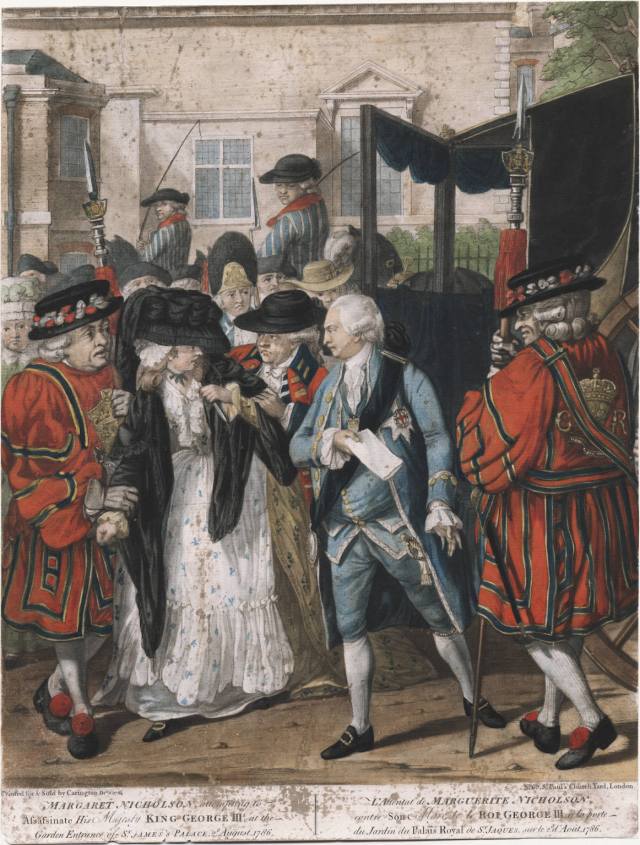 Margaret Nicholson was not born in 1750, the daughter of George Nicholson a barber from Stockton-on-Tees, as stated in most sources including the much respected Oxford Dictionary of National Biography. Nor was she born in Stokeswell in Yorkshire, as stated by Fiske. She was, in fact, the daughter of Thomas and Ann Nicholson of Stokesley in North Yorkshire, born in 1745 and baptised there on the 9th December 1745, the fourth child of the couple. Thomas Nicholson was, however, a barber, that bit of information was correct.

Her brother, named in the newspaper report below and who gave evidence at his sisters trial, was George Nicholson, landlord of the Three Horseshoes public house in Milford Lane on the Strand, a lane leading down from St Clement’s Church to the River Thames.

Margaret had left Stokesley for London when she was just twelve years of age, finding employment in several respectable houses before achieving her notoriety at the age of forty years.  She died at Bethlem Hospital (Bedlam) in St. George’s Fields, being buried there on the 21st May 1828, her age erroneously given as 90 years.

The following newspaper article details her attempt on the King’s life and, written just hours after the event and in an attempt to quash the rumours which were already starting to flow through the streets of London, can be taken as an authentic account.

Particulars of MARGARET NICHOLSON’S Attempt to assassinate his MAJESTY.

This morning, as his Majesty was alighting from his carriage at the gate of the palace, a woman, who was waiting there under pretence of presenting a petition, struck at his Majesty with a knife; but providentially his Majesty received no injury. The woman was immediately taken into custody; and upon examination appears to be insane.

An extraordinary Gazette gives importance to a subject; but this gazette is so very short, that some further particulars of this very interesting fact appear to be necessary.

It was at the garden-door opposite the Duke of Marlborough’s wall, that the woman, who appeared decently dressed, presented to his Majesty a paper folded up in the form of a petition. His Majesty, in stooping to receive it, felt a thrust made at his belly, which passed between his coat and his waistcoat. The King drew back, and said, “What does this woman mean!” At that instant one of the yeomen (Lodge) laying hold of her arm, observed something drop out of her hand, which another person taking up, said, “It is a knife!” The King said, “I am not hurt – take care of the woman – she is mad – do not hurt her *.”

His Majesty then went forward into the palace; and, when he had recovered his surprise, appeared to be greatly affected, expressing in a kind of faultering voice, that, “surely! he had not deserved such treatment from any of his subjects.” On opening the paper, when he entered the royal apartments, there were found written “To the King’s Most Excellent Majesty,” the usual head to petitions, but nothing more.

The woman was immediately taken into custody, and carried to the inner guard-chamber. Being questioned how she could make such a wicked and daring an attempt, her answer was, that “when she was brought before proper persons, she would give her reasons.”

She was then taken to the Queen’s antichamber, where she remained from twelve till near five, during all which time, though spoken to by several of the nobility, she did not condescend once to open her lips, but appeared totally unmoved by any representations of the atrocity of her crime.

At five o’clock she was taken to the board of green cloth for examination, where were present the Attorney and Solicitor Generals and Master of the Rolls, Mr Pitt, the Earl of Salisbury, Marquis of Caermarthen, Lord Sydney, Sir Francis Drake, and several magistrates.

Being interrogated, she said, her name was Margaret Nicholson, daughter of George Nicholson of Stockton-upon-Tees in Durham; that she had a brother who kept a public house in Milford-lane; that she came to London at twelve years of age, and had lived in several creditable services. Being asked, where she had lived since she left her last place? to this she answered frantically, “she had been all abroad since that matter of the Crown broke out.” – Being asked what matter; she went on rambling, that the Crown was her’s – she wanted nothing but her right – that she had great property – that if she had not her right, England would be drowned in blood for a thousand generations. Being further asked where she now lived; she answered rationally “at Mr Fisk’s, stationer, the corner of Marybone, Wigmore-street.” On being questioned, as to her right; she would answer none but a judge, her rights were a mystery. Being asked, if she had ever petitioned; said she had, ten days ago. On looking back among the papers, such petition was found, full of princely nonsense about tyrants, usurpers, and pretenders to the throne, &c. &c.

Mr Fisk, being sent for and interrogated, said, she had lodged with him about three years; that he had not observed any striking marks of insanity about her – she was certainly very odd at times – frequently talking to herself – that she lived by taking in plain work, &c. Others who knew her said, she was very industrious, and they never suspected her of insanity.

Dr Monro being sent for, said, it was impossible to discover with certainty immediately whether she was insane or not. It was proposed to commit her for three or four days to Tothil-fields Bridewell. This was objected to, because it was said, she was a state prisoner. At length it was agreed to commit her to the custody of a messenger.

Her lodgings being examined, there were found three letters written about her pretended right to the crown, one to Lord Mansfield, one to Lord Loughborough, and one to Gen. Bramham.

His Majesty’s presence of mind, and great humanity, were very conspicuous in his behaviour upon this shocking and terrifying attempt to take away his life. And if he had not instantly retreated, or if the wretch had made use of her right hand instead of her left, the consequences might have been of a most fatal nature.

It has been said, that the knife was concealed in the paper; but the fact was it was under her cloak; and when she presented the paper with her right hand, she took it and made a thrust with her left.

The instrument she used was an old ivory handled desert knife, worn very thin towards the point; so thin, that a person pressing the point against his hand, it bent almost double without penetrating the skin.

This attempt circulated through the city with amazing rapidity, and, gathering as it flew, a thousand fictions were added. The instant publication of the GAZETTE EXTRAORDINARY stopt at once their mischievous effect.

* The Earl of Salisbury ordered a gratuity to the yeoman of the guard, and the King’s footman, who first secured Mrs Nicholson after her attempt on the King; the rewards were 100 l. to the first, and 50 l. to the other.

In writing this article we have to acknowledge our debt to the following source: