An old custom, practised in Dunmow in Essex, entailed the award of a flitch (or side) of bacon (essentially half a pig, cut sideways) to any couple who had been married for at least a year and a day and who could prove that they had never had a cross word nor repented of their marriage.

The origins of this custom are murky. It may date to as early as 1104 and the foundation of Little Dunmow Priory by Lady Juga Baynard and as a practice to encourage church weddings as opposed to less formal marriage contracts like handfasting. Other sources say that Reginald Fitzwalter, the Lord of the Manor, and his wife appeared at the gates of the Priory a year and a day after their marriage, dressed as peasants and begging the Prior’s blessing. The Prior did not recognise the petitioners and – impressed by their devotion – he made a gift to them of a flitch of bacon. Fitzwalter, in return, bestowed land on the Priory with one very explicit condition: a similar flitch must be awarded to any couple who presented themselves at the Priory and could claim, after a year and a day’s marriage, to be as devoted as he was to his own wife.

Whatever its origins, the Dunmow flitch was well known enough by 1387 to be mentioned by Geoffrey Chaucer in Canterbury Tales. The wife of Bath said:

The bacon was not set for him, I trow,

That som men have in Essex at Dunmow.

Little Dunmow Priory fell victim to the dissolution of the monasteries in the sixeenth-century and the custom lapsed into abeyance until 1701.

That year, at Dunmow, the flitch of bacon was awarded twice, once to John Reynolds of Hatfield Regis and his wife Ann, wed for ten years, and secondly to a butcher from Much Easton named William Parsley and his wife Jane who had been married – quietly, peaceably, tenderly and lovingly – for around three years. (The Parsley’s marriage is probably the one which took place at Hatfield Broad Oak in 1698, between Will. Parsley and Jean Judd.)

Bringing witnesses with them to prove their marriage and their fidelity to each other, and to their conjugal bliss in their marriage, the couples were brought before a ‘judge and jury’ where they were questioned.  The jury who sat to decide if the Parsleys qualified for the flitch of bacon were five spinsters, Elizabeth, Henrietta, Annabella and Jane Beaumont, and Mary Wheeler. Upon passing this ‘trial’ the man and wife knelt on two pointed stones placed near the door of the church and an oath was administered (the Lady Chapel of the old Priory remains in use as the parish church). 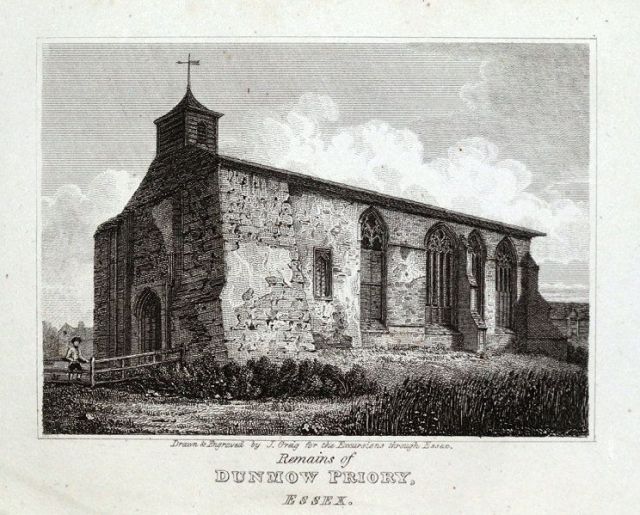 You do swear by custom of confession

That you ne’er made nuptual transgression

Nor since you were married man and wife

By household brawls or contentious strife

Or otherwise in bed or at board

Offended each other in deed or in word

Or in a twelve months time and a day

Repented not in any way

Or since the church clerk said Amen

But continue true and in desire

As when you joined hands in holy quire.

After the oath came the sentence. Then, the pair were borne aloft in a wooden chair and carried around the village to the general acclaim of the gathered crowd, and merry-making commenced.

Since these conditions without any fear

Of your own accords you do freely swear

A whole Flitch of Bacon you do receive

And bear it away with love and good leave

For this is the Custom of Dunmow well known

Tho’ the pleasure be ours, the Bacon’s your own. 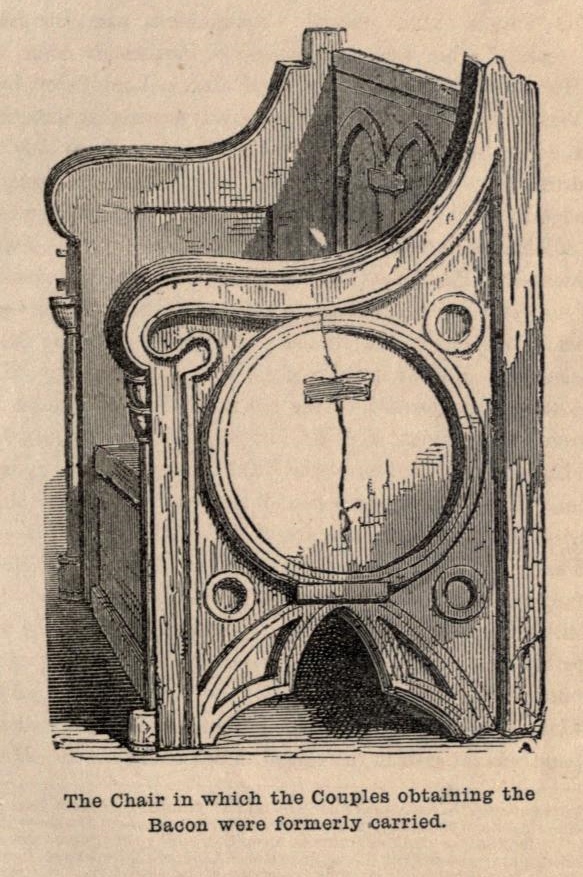 Next to receive a flitch of bacon in Dunmow were Thomas Shakeshaft and his wife, Anne, née Amis, who had married in the village of Wethersfield in Essex in 1744. Thomas, an eminent weaver (or woolcomber) was, in one report, said to be 80 years of age and Anne was his second wife. After they had been married for seven years, on the 20th June 1751 they journeyed to Dunmow together with witnesses to make their oath.

It had been fifty years since the last claimants, and the Shakeshafts were treated as minor celebrities. Supposedly a crowd of 5,000 people from all over the country came to see the ceremony and when Anne was examined by a jury she admitted that she had only repented once since her marriage; she wished that she had married sooner. 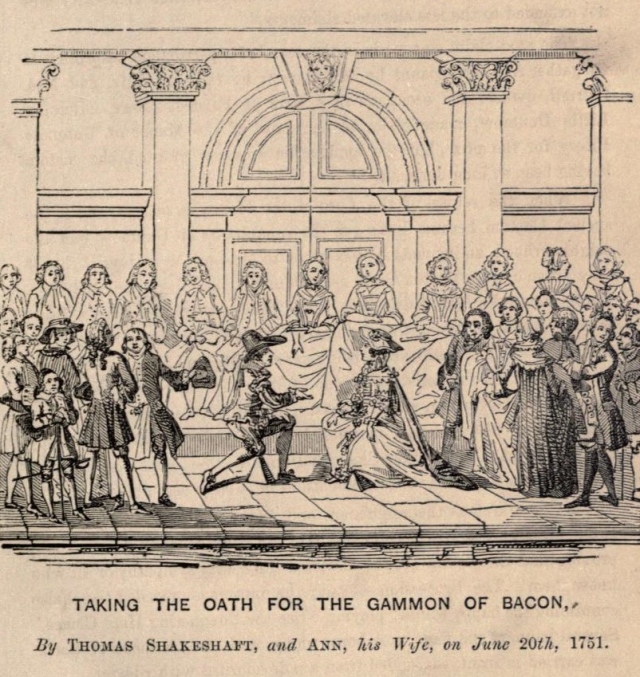 The canny couple cashed in on their windfall. They sold slices of their ham to several of the ladies and gentlemen who had come to Dunmow to join in the celebrations, most of whom were ‘whimsically merry on the occasion’. On returning to their cottage in Wethersfield, the Shakeshafts were £50 richer than when they had set off.

If the newspaper who reported Thomas’ age as 80 was anywhere close, then his second wife must have been quite a few decades younger: it was claimed that, on the 18th July 1753, Anne and Thomas became the proud parents of twin sons, named George and Edward. Supposedly baptised at Wethersfield (we have been unable to verify this), their godfathers were the Hon Charles Grey, Esq and Hugh Brampton, Esq and Lady Abdy was godmother (the Abdy’s estate was Felix Hall in Essex). (NB. there is a burial at Wethersfield in 1773 for a Thomas Shakeshaft; unless he reached his centenary and then some, it is likely he was, in fact, a fair bit younger than 80 when he journeyed to Dunmow with his wife.)

Although there are reports of other couples claiming the flitch of bacon at Dunmow during the Georgian era, they appear to be fictional. In 1767 it was said that an Irish nobleman and his wife had headed to the village to undertake the trial, the first instance of anyone of rank to do so.

Five years later, the lord of the manor refused admittance to John and Susan Gilder of Tarling in Essex when they made a very public entry into Dunmow at the head of a great concourse of spectators and supporters, demanding to be allowed to take the oath and receive the bacon. They found the gates of the old priory nailed shut and returned home empty handed.

The last noted report concerned Montagu Burgoyne, Esq, named as a commissioner with the Victualling Board and who was later a politician. He had actually demanded – and, it is claimed, received – the flitch, after going through all the requisite ceremonies and oaths. The Burgoynes’ marriage was described as a ‘pattern of conjugal affection’ and so perhaps that gave rise to the notion that the couple had journeyed to Dunmow.

Even King George III and Queen Charlotte were not immune to the tradition. A paragraph had appeared in a newspaper suggesting that ‘two Great Personages’ who intended to tour England during the summer of 1770 would make a stop at Dunmow to claim the flitch of bacon.

The Great Personage on reading it shewed it to his consort, who smiled and said, on its being explained to her, that his Majesty should not have it all, for she would have half of it. The person who was in waiting at the time, said, he supposed it was some nonsense of Mr Such-a-one’s. Nonsense, replied the Great Personage, you may call it what you please, but whoever the author of it is, he has paid me a greater compliment than I have ever received since I was King of England.

The eighteenth-century gossip, Horace Walpole, noted that in Wychnor, Staffordshire where the tradition was also reputedly followed, a flitch was awarded c.1730. However, after 1760 Wychnor didn’t even bother to keep a flitch ready at the manor for any claimants but instead merely displayed a carved wooden replacement over the fireplace in the main hall to pay lip service to the old custom.

In the Victorian period, the tradition was revived at Dunmow and continues to this day with the ‘trials’ now carried out every four years (in mid-July during a leap year).

History of the Dunmow Flitch of Bacon, William Andrews, 1878