Today, we are honoured to have Sara visit our blog, so bear with us while we travel slightly further back in time with her whilst she tells us the story of one early modern woman. Sara’s book Maids, Wives, Widows: Exploring Early Modern Women’s Lives 1540-1740 (Pen and Sword, 2015) is currently on special offer for a fraction of its RRP from her website . 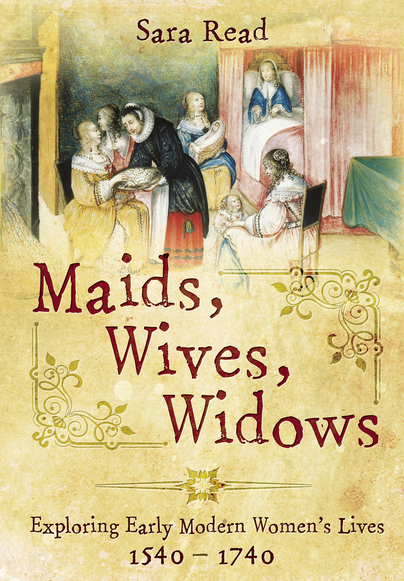 Recently, I wrote an account of the life and times of Dr Thomas Gibson (1648/9–1722) for Early Modern Medicine. Gibson is best known for his book The Anatomy of Humane Bodies Epitomised (at least six editions from 1682), but he was briefly physician-general to the British Army while in his 70s. He is also known in the context of his second wife, Anne Cromwell, who was a granddaughter of the Lord Protector, Oliver Cromwell. 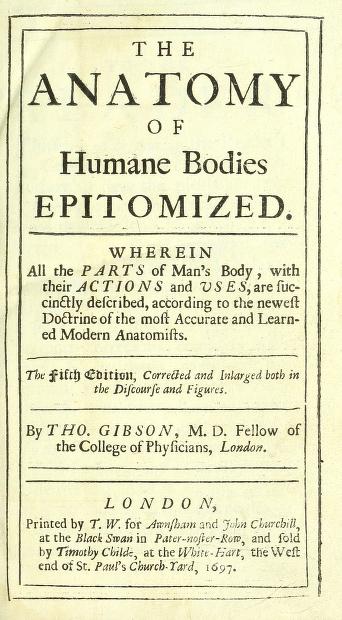 While researching the piece, I read about how Gibson’s first wife, Elizabeth (1646–1692) was a widow from Stanstead St Margaret’s, Hertfordshire.  Most accounts of Thomas Gibson describe Elizabeth as the widow of Zephaniah Cresset, which indeed she was, but what is left out is that Elizabeth was also widowed a second time,  before marrying Gibson in 1684.

The information about Elizabeth’s life comes from her third husband who published an autobiography along with her funeral sermon, A Sermon Preach’d on the Occasion of the Funeral of Mrs Elizabeth Gibson, together with a Short Account of her Life (London, 1692), shortly after her death at the age of 46.

Gibson opens by describing how his wife had lately lived a quiet, retired life, and that she was a deeply pious woman who spent her days in charitable endeavours and prayer, and who unfortunately did not enjoy good health.  He hoped her life story might provide an instructional text and others should follow her example. He claimed he was best placed to represent her life and views because of his ‘long Conversation’ with his late wife but also how he had observed her Christian walking. Their marriage was in fact only around eight years long, but it was a full six years before Gibson made a new marriage to Anne.  Throughout the short autobiography, Gibson quotes extensively from Elizabeth’s spiritual meditations,  explaining to the reader that her words will always be surrounded by ‘Double comma’s’ (sic) or speech marks.

Elizabeth was the third daughter of a lawyer, George Smith who practiced at Grey’s Inn, London, and who was appointed judge to Scotland in 1658. He died shortly after the family relocated to Edinburgh and Elizabeth described how vulnerable she, her mother, Hannah, and younger sister felt at being alone in a strange place 300 miles from their nearest relatives. Her father’s death then was the first of the ‘great afflictions’ which Elizabeth lived through.  Soon afterwards and from the age of fourteen, Elizabeth contracted a ‘Quatane-ague’ which she had for two years.  It was Gibson’s opinion that this illness was the root of all the subsequent ill-health Elizabeth endured.

It was when she was 17, and somewhat recovered, that she was married to Zephaniah Cresset. Cresset was the son of Edward Cresset Master of the alms house and school Charter-House in London from 1650-1660, but was like Elizabeth, from Stanstead St Margaret’s in Hertfordshire – indeed the Smith and Cresset family graves are alongside one another in the same church(1).

Zephaniah was educated at Magdalene College, Oxford and who was planning on working as a doctor of physic in the future. The Cresset marriage only lasted a few months. The couple were living in Elizabeth’s mother’s home at St Margaret’s, and while travelling back there from London Zephaniah fell from his horse, which caused him to contract a fever and he died within a few days of the fall.

While still a teenager, Elizabeth found herself both widowed and expecting her first child. Her son, named after his father, was born seven months after her husband’s death. Worse was to come when the child, a healthy and thriving toddler died suddenly aged just 18 months in October 1665. Elizabeth’s younger sister Mary, died at this time too, both were victims of the Great Plague which swept the country that year, and which claimed five members of Elizabeth’s family, including her father-in-law (who died in December 1665). 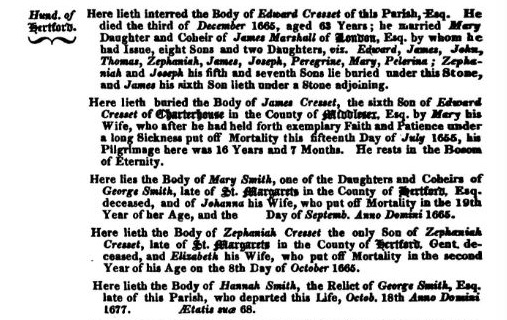 Her family began putting pressure on Elizabeth to remarry almost immediately, but it was around three years later that she felt moved by God to marry a physician called Thomas Dawson. Dawson graduated with a medical degree from Jesus College, Cambridge in summer 1669, and was admitted to the College of Physicians a decade later. Elizabeth and Thomas were married for almost fourteen years, and it was a source of great sadness to her that they had no children together.

Throughout the marriage it seems that she suffered from bouts of ill-health including gallstones, colic, bowel problems and jaundice. Like during her first marriage, the couple lived with Elizabeth’s mother in St Margaret’s, but following her mother’s death in 1677 the couple relocated to London.

In 1682, Elizabeth went back to her country home to recuperate from the measles. She had not been there long when she got the sad news that Dr Dawson had died suddenly in their London house. He was buried in St Alphage, Cripplegate (2).

Gibson describes how this latest bereavement caused her to suffer from ‘hysterical Colick’ for a ‘year or two’ afterwards.  It was two and half years after losing her second husband that Elizabeth married Gibson. She was never wholly well during their entire seven year marriage, suffering from loss of appetite, vomiting, diarrhoea, painful limbs, and even convulsions.

It seems as though she still had some hopes of a family when she wrote a will on 20 December 1687. In it she bequeathed lands she owned in Hertfordshire to her husband, followed by any children she might yet bear him. She also placed on record her desire to be buried back at St Margaret’s next to her mother and son (3).

While the autobiography describes Elizabeth’s exemplary Christian suffering and ‘good death’, it does not appear that her stated wish to be buried back in St Margaret’s was accommodated and her place of rest is not noted. 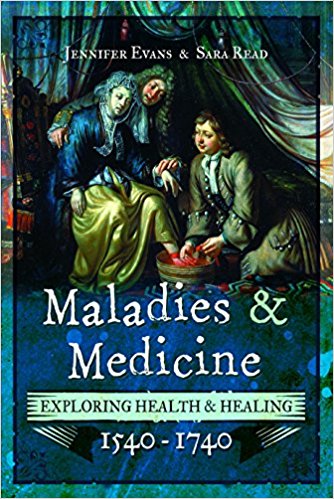 If this post has piqued your interest in health matters at this time, Sara’s next book Maladies and Medicines: Exploring Health and Healing, 1540-1740, co-authored with Dr Jennifer Evans, is coming out with Pen and Sword in July 2017! Keep an eye on Sara’s Twitter feed for more information (@saralread) and also Jennifer’s Twitter feed (@historianjen).

Dr Evans will also be appearing on  the ‘Inside Versailles‘ programme with Greg Jenner and Kate Williams on BBC2, 26 May, so keep an eye out for it.

Today we welcome a fellow writer for Pen & Sword, the lovely Dr Sara Read, a lecturer in English at Loughborough University and a contributing editor for earlymodernmedicine.com.

Sara has recently published a book entitled Maids, Wives, Widows: Exploring Early Modern Women’s Lives, 1540-1740. In this post she looks at the role of working class women, whose work never seemed to end, which fits in so well with our previous articles that have looked at the roles of those employed to work ‘below stairs’, the housemaid, the laundrymaid and the the cook.

In an article in the Guardian on 22 October 2014, Jessica Valenti commented on the recently announced gender gap figure to come from US research. The research found that women are apparently still doing significantly more housework and childcare than their partners.

However, the fact that this disparity of labour is now lessening would have been music to the ears of women like Mary Collier, a Georgian washer woman and labourer from Petersfield, Hampshire.

In 1739 a verse letter by her entitled ‘A Woman’s Labour: An Epistle to Mr Stephen Duck’ was published in London.

The poem was a riposte to Duck’s 1730 poem ‘The Thresher’s Labour’ which claimed that men did the bulk of the hard work in labouring. 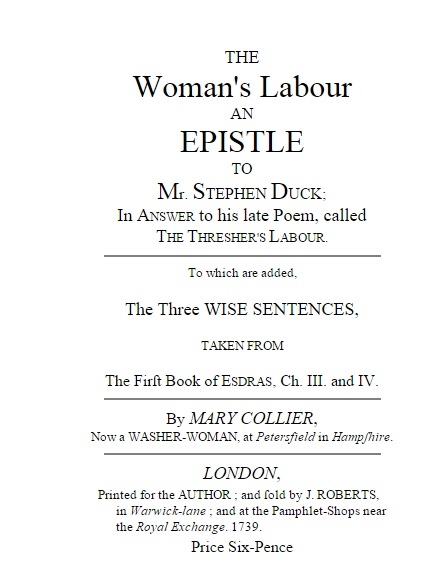 Not only did Mary take issue with this but as the line in the title of this post suggests, Mary described how when she finished her working day she’d stagger home, babe in arms:  ‘Our Corn we carry, and our Infant too’ only to have to begin work all over again:

our House in order set;
Bacon and Dumpling in the Pot we boil,
Our Beds we make, our Swine we feed the while;
Then wait at Door to see you coming Home,
And set the Table out against you come:
Early next Morning we on you attend;
Our Children dress and feed, their Clothes we mend;
And in the Field our daily Task renew.

She described doing the housework and cooking the evening meal, then waiting for her husband to come home to his hot meal. He then took his supper and went off to a good night’s sleep while she was awakened regularly by the infant children.

Mary then described getting the children up, dressed and fed the next morning before going to work in the fields. Elsewhere in the poem she mentioned having the children with her in the fields helping: ‘Our Children that are able, bear a Share / In gleaning Corn, such is our frugal Care’.

Mary Collier was in the bottom tier of society as a manual labourer in the fields seasonally and also worked as a washer woman. She described how she had to walk to work though all weathers, hours before dawn, to the house where she was employed in the laundry of an upper class household:

But when from wind and weather we get in,
Briskly with courage we our work begin;
[…]

For several hours here we work and slave,
Before we can one glimpse of day-light have;
We labour hard before the morning’s past,
Because we fear the time runs on too fast.

The life described by Mary Collier is one of unrelenting work and exploitation. She ends her poem by comparing herself to a worker bee:

SO the industrious Bees do hourly strive
To bring their Loads of Honey to the Hive ;
Their sordid Owners always reap the Gains,
And poorly recompense their Toil and Pains.

To read more about the daily lives of women of all ranks see Sara Read’s new popular history book: Maids, Wives, Widows: Exploring Early Modern Women’s Lives, 1540-1740 which is available directly from Pen & Sword or from Amazon as a hardback or Kindle