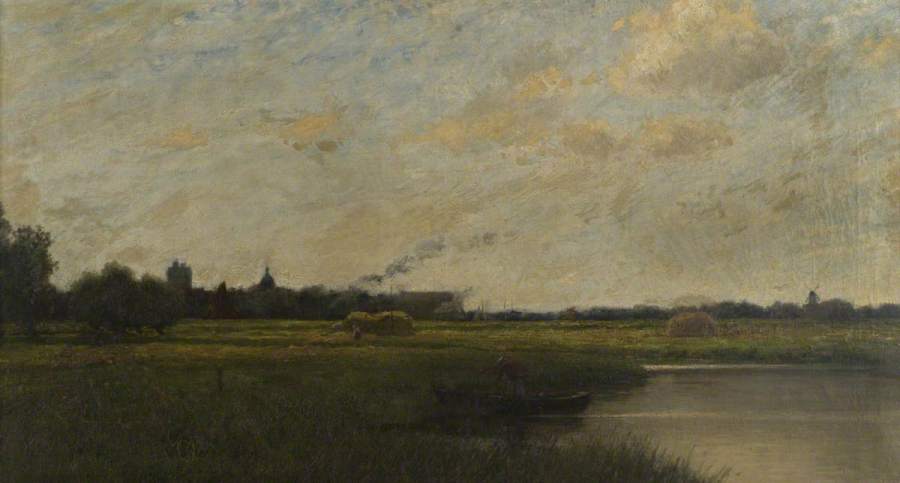 Today’s blog is going to be a sad little tale of a family destroyed by opium in late Georgian England. It perhaps struck us so much because the family lived not in an inner city slum but instead in the flat and open agricultural landscape of the Lincolnshire Fens, a marshland close to the Wash, an estuary on the eastern coastline of England.

We’ll turn first to a newspaper report on the inquest of a child belonging to this family, poor little Rebecca Eason who was actually younger than mentioned; she had not yet reached her fifth birthday.

An inquest was held at Whaplode on the 21st inst., by Samuel Edwards, Gent. coroner, on view of the body of Rebecca Eason, a child aged 5 years, who had been diseased from its birth and was unable to walk or to articulate, and from its size did not appear to be more than a few weeks old:- The mother had been for many years in the habit of taking opium in very large quantities, (nearly a quarter of an ounce in the day), and it is supposed from that circumstance had entailed a disease on her child which caused its death:- it was reduced to a mere skeleton, and had been in that emaciated state nearly from its birth. – Verdict, “Died by the visitation of God, but that from the great quantity of opium taken by the mother during her pregnancy of the said child and of her suckling it, she had greatly injured its health.” – It appeared in evidence that the mother of the deceased had had five children – that she began to take opium after the birth and weaning of her first child, which was and is remarkably healthy – and that her four younger children have all lingered and died in the same emaciated state as the child which was the subject of this investigation. – The mother is under 30 years of age: she was severely censured by the coroner for indulging in so pernicious a practice.

For reasons that will perhaps become clear, we’re not going to judge poor addicted Mary Eason. She was quite clearly continuing to take opium despite knowing the effect it was having on her children but we cannot, at this remove, know what induced her first to use the drug, and once addicted very little help would be available to her.

We were surprised to find that the consumption of opium in the Fenland was extremely high in comparison to other areas. Even now large areas of the Fenland appear quite isolated and in the early nineteenth-century there was limited medical assistance for the inhabitants who suffered badly from the ague (malarial fever, often leading to rheumatism), brought on by living in a marshy and largely unhealthy district. In 1867 Dr Hawkins of King’s Lynn informed the readers of the British Medical Journal that Lincolnshire and Norfolk consumed more than half of the opium which was imported into the country.[i]

The fact that these conditions had led to a noticeably high consumption of opium was commented on at the time. `There was not a labourer’s house… without its penny stick or pill of opium, and not a child that did not have it in some form.’ According to an analysis made in 1862, more opium was sold in Cambridgeshire, Lincolnshire and Manchester than in other parts of the country.’ As elsewhere, poppy-head tea had been used as a remedy long before other narcotics were commercially available. Charles Lucas, a Fenland physician, recalled the widespread use of the remedy. `A patch of white poppies was usually found in most of the Fen gardens. Poppy-head tea was in frequent use, and was taken as a remedy for ague… To the children during the teething period the poppy-head tea was often given. Poppies had been grown in the area for the London drug market, where they were used to produce syrup of white poppies; and there had even been attempts made in Norfolk to produce opium on a commercial scale.[ii]

Mary married young, very young given that she was stated (erroneously) to be under the age of thirty years in the September of 1825. Mary was, in fact, probably just on the other side of thirty as she married on the 9th September 1810 at the church of St Mary’s in Whaplode. Her maiden name was Egan and her husband, a labourer (given the location he’d be an agricultural labour), was named Thomas Eason. Mary made her mark on the register of her marriage and the two men who witnessed the ceremony were possibly two of the Church Wardens as they witnessed many marriages in the parish. Their names were Robert Collins and Robert Cook Collins.

So Mary was likely to have been little more than sixteen years of age and the marriage was a hasty one, possibly conducted with encouragement from the parish officials for Mary was heavily pregnant at the time of her wedding. Her child, a daughter named Ann, was born less than two months after she had walked up the aisle and was baptised in the same church on the 4th November 1810.

On the face of it, purely from the records available, things do not look too bad for the couple despite the unpromising start. They lived on Cobgate in Whaplode and, from the account given at the inquest, little Ann was a healthy baby and Mary initially a good mother. But the records belie the true facts. It was after Ann had been weaned that Mary Eason began to take opium.

We can’t know if her hastily made marriage was a happy one (for as the old saying goes, marry in haste and repent at leisure) nor if she was suffering from what would now be diagnosed as postnatal depression after the birth of her child. But begin to take opium she did which was absolutely nothing out of the ordinary in the area in which she lived and where the drug was widely available. It was not unknown for working-class women to dose their infant with poppy-head tea to keep them quiet or to soothe them. Sometimes their own addiction began because they ‘tasted’ the opiates which they gave to their children. Perhaps this is how Mary’s sad story of addiction began? However it came about, now the tragic procession of the baptisms and burials of her children begins to stalk the pages of the parish register.

First was William, baptized on the 15th April 1813 and buried just a few months later on the 30th September. He was followed by another girl, Susanna, baptized on the 2nd January 1815 and who lived to see only her first birthday. She was buried on the 13th May 1816. Then comes Sarah, baptized on the 1st November 1816 and possibly, contrary to the inquest, a further child who did survive Mary’s addiction for we have as yet found no corresponding burial for her.

We’ll be honest here, when we first went hunting through the records for Mary Eason and her children we half expected to see a trail of illegitimate children. But no, Thomas Eason is named on all the baptisms and burials as the father, the address is always Cobgate and his profession does not change. For anyone reading through the Whaplode registers the household looks to be a completely stable one, albeit tinged with tragedy. As we have not judged Mary, neither will we judge Thomas Eason. Again, we have no way of knowing whether he was a kind or a cruel husband or even if he was an opium eater himself, but the mere fact that he had stuck by Mary and that their eldest child was reported, in 1825, to still be healthy, points to him trying his best to hold his troubled home together. Possibly he just got by and did what he could, not knowing what else to do or where to turn to for help?

At least five infant children belonging to Thomas and Mary Eason now lay in the churchyard at St Mary’s and it seems that they had passed as mere statistics of high infant mortality without the cause of death raising any suspicions, or at least no suspicions which reached the authorities. In the Fenland the rates of infant mortality were even higher than elsewhere, with the use of opium being one of the main causes. But Rebecca’s death in 1825 was different, because of her deformities, leading to the inquest.

After Rebecca’s burial on the 22nd September 1825 when she joined her five siblings in the churchyard Thomas and Mary Eason vanish from the pages of the parish register. We’ve looked for them in later records, hoping to put a happy ending to their lives, but we can find no trace of them or their daughter Ann (and Sarah if she did live). A sad ending for a sad tale of a Fenland family in the early nineteenth century.

[ii] Opium in the Fens