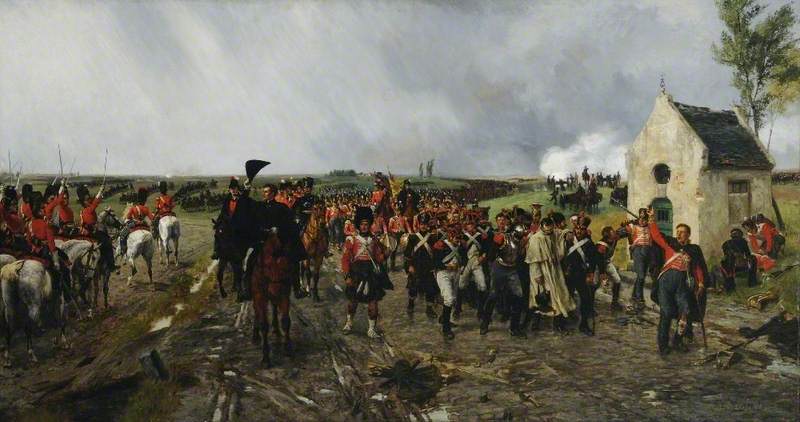 William Humbley, an army officer, gave his newborn son a name almost impossible to live up to – William Wellington Waterloo Humbley. Even more than that Arthur Wellesley, the Duke of Wellington, stood as the child’s godfather. Little William Wellington Waterloo was born on the actual day of the battle, the 18th June 1815, at Sandgate in Kent according to information in the Cambridge University Alumni 1261-1900, but was not baptized until nearly a year later.

William Wellington Waterloo, of Eynesbury (now part of St Neot’s but then a neighbouring village), was baptized on the 10th June 1816 at the parish church in Boxworth, Cambridgeshire. His father, William Humbley of the 95th Foot, had served in both the Peninsular War campaigns and at the Battle of Waterloo (the 95th was also known as the Rifle Brigade, made famous by Bernard Cornwell in his Sharpe novels).

William Humbley had been a First Lieutenant at the time of Waterloo, and a note against his name on the Waterloo Roll Call says:

This officer had been present at almost every battle and action in the Peninsular, and when the long-looked-for silver war medal was given, in 1848, he received one with thirteen clasps. Severely wounded at Waterloo. Attained the rank of lt.-col. unattached, 1851, and died 26th October 1857, at Eynesbury.

His severe wound in that battle had been caused by a musket ball in each shoulder, one of which stayed there till his dying day.

Four years after the birth of William Wellington Waterloo, William Humbley and his wife Mary had a daughter, and this child they named Vimiera Violetta Vittoria, Vimiera almost certainly for Vimiero in Portugal, and the battle there in 1808 in which the British, under General Arthur Wellesley, the future Duke of Wellington, defeated the French forces and halted their invasion of Portugal. William Humbley, in the 95th, would have taken part in that battle: Vittoria obviously commemorated the Battle of Vitoria in 1813. Like her elder brother, Vimiera Violetta Vittoria was also baptized at Boxworth, on 11th August 1820, her father being named as a Captain of the Rifle Brigade of Tempsford in Bedfordshire. In later life, Vimiera used the name Victoria in place of Vittoria; she married Richard Rickett Wells, son of John Wells, a conveyancer from Eynesbury, in 1840. 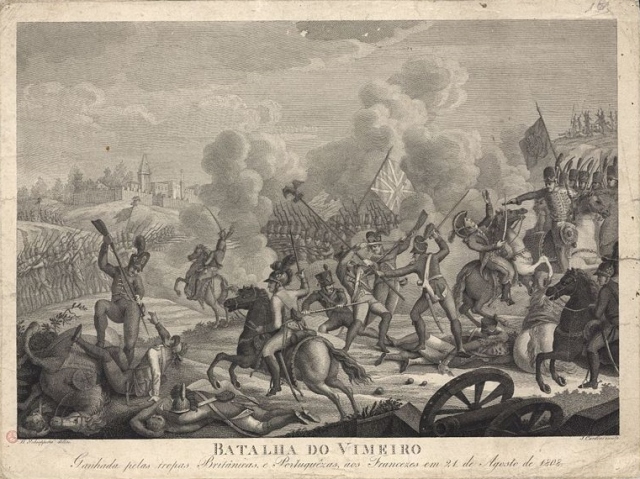 Other battles that Captain William Humbley of the Rifle Brigade saw action in included Roliça, Corunna, Barossa, Salamanca, Nivelle, Orthes, and Toulouse; he was, in all, five times wounded severely in battle. He was placed on half-pay on Christmas Day 1818 and remained without employment until he was recalled to the army in 1854, at the age of 62 years, on the outbreak of the Crimean War.

William Wellington Waterloo Humbley grew up to marry, in 1857, Elizabeth Nelson Watson, an heiress from Gainsborough in Lincolnshire, although her middle name was not given in honour of the naval hero Admiral Horatio Nelson, but in a rather more mundane fashion was for her father, William Nelson Watson, Esquire.

Still, with Wellington, Waterloo and Nelson amongst the couple’s names, they were a fitting tribute to the military victories of the British army and navy of their time. The couple, who were later to divorce, continued the naming tradition with their son, William Wellesley Humbley, born in 1868.

So, the question remains, did William Wellington Waterloo Humbley live up to his name? It seems he did; perhaps with forenames such as those he had little choice but to follow his father into the British army, and Humbley junior achieved the rank of Lieutenant Colonel (unattached), as his father had before him. Harts Army List of 1888 has this to say of Humbley junior:

Lt. Colonel W.W.W. Humbley served with the 9th Lancers in the Sutlej campaign in 1846, including the battle of Sobraon (Medal).

Perhaps we should also spare a thought for William Waterloo Wellington Rolleston Napoleon Buonaparte Guelph Saunders, born in 1867 at Sutton Courtenay in Berkshire, the son of William and Maria Saunders? Quite what his parents were thinking when they gave their infant son such a mouthful of a name, with both opposing sides of the famous battle covered, is anyone’s guess!

Jackets of Green by Arthur Bryant.

The information that the Duke of Wellington stood godfather to William Wellington Waterloo Humbley is from the West Kent Guardian newspaper dated the 19th March 1842. Additional information on the battles at which William Humbley of the 95th was present is taken from the London Standard, 17th April 1844, and Vimiera’s wedding from the Cambridge Independent Press, 4th January 1840. She perhaps initially married without her father’s permission, with a second marriage to make the ceremony legal: her first marriage to RR Wells took place on 3rd January 1840 at St Peter Cornhill, where she was listed as 21 years of age, and on the 10th February 1840 the couple married once more, at St Andrew Holborn, with Vimeira this time listed as a minor.