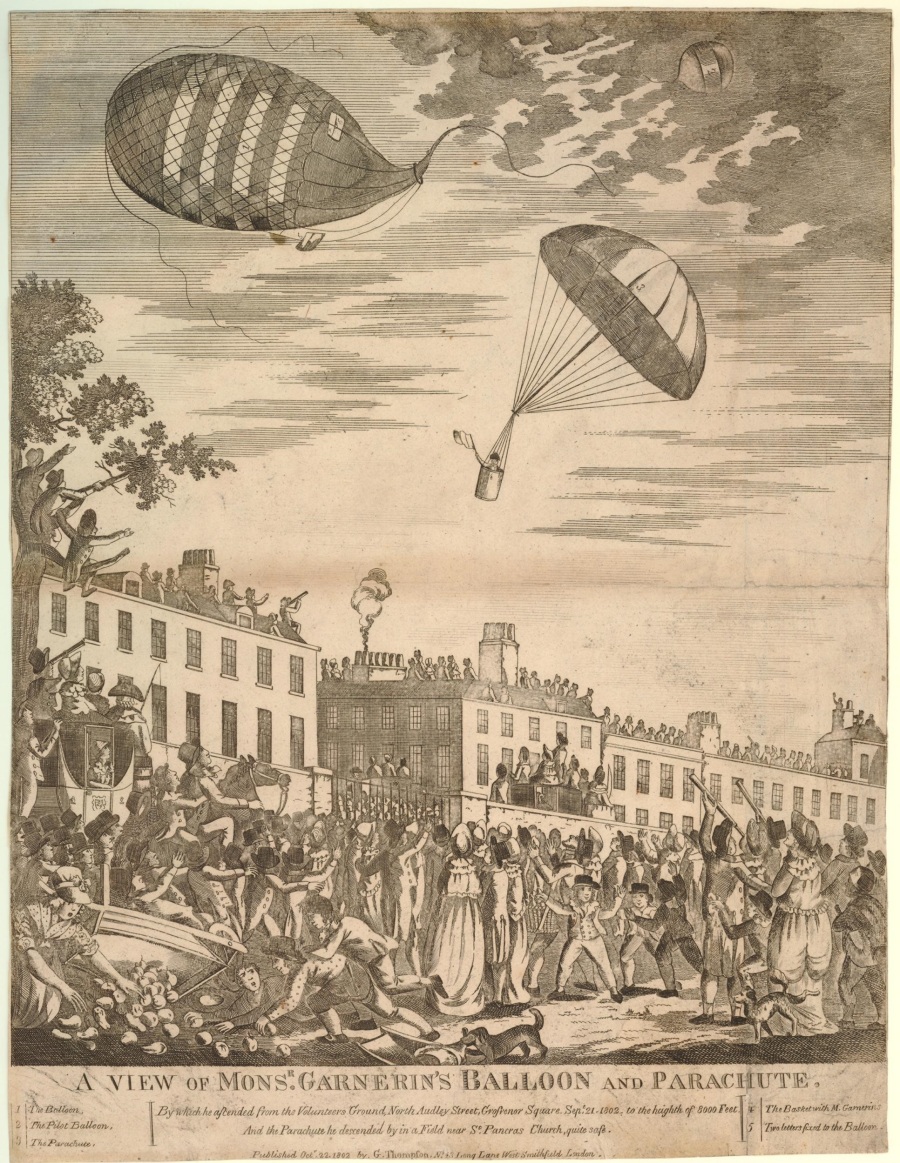 I am delighted to welcome a new guest to All Things Georgian, Alix Nathan, who is here to tell us more about the background behind her latest book, ‘Sea Change‘.

So without further ado, I’ll hand you over to Alix:

My recent novel Sea Change, begins with a balloon journey heading for disaster.

In 1802 when the flight takes place, balloon travel was no longer rare, having begun in Paris in 1783, but people still flocked to the launches. It was because of these flights that the word balloon entered the language to replace ‘aerostat’ or ‘aerostatic globe’.

The journey in Sea Change is based on a real one that took off from Ranelagh Gardens on 28th June 1802.

An elegant afternoon breakfaft was given at Ranelagh by the directors of the Pic Nic Society of which about 2000 perfons of the firft diftinction partook. About five o’clock, Mr Garnerin, the celebrated aëronaut, accompanied by Capt. Sowden, of the navy, ascended in his balloon.  Its afcent was, in the firft inftance, very gradual, in order that all poffible gratification might be afforded to the crowd of fpectators.

In my story I’ve replaced Captain Sowden with two of the principle characters, Sarah and Joseph, but André-Jacques Garnerin remains a real person, known not only for his frequent flights, but also for taking a woman up with him in 1798 in Paris which was something of a scandal, and also for inventing and demonstrating a parachute.  The intrepid Garnerin took his wife, who had once been his student, on many of his flights and ultimately was made Official Aeronaut of France.

I found the account of the original flight from Ranelagh in The Annual Register of 1802, in which extensive quotation is given from Captain Sowden, who, as a naval officer used to writing up logs, provides fascinating detail of the physical experience of rising through dense cloud, seeing and hearing the world laid out beneath them and then encountering drastically difficult weather conditions.  His account was a gift for me.  Sowden and Garnerin’s flight came down badly but on dry land, whereas I take the balloon out to sea.

Annual Registers are a marvellous source.  I have a run from 1789 to 1814, most in their very fragile eighteenth-century boards.  Begun in 1758, its first editor Edmund Burke, it aimed to cover history, politics and literature.  My volumes contain accounts of events in Europe and elsewhere, especially where war in concerned; parliamentary matters, state papers, lists of marriages (only those of the ‘first distinction’ of course!), promotions, deaths, tables of stock prices, imports and exports, barometer and thermometer readings, amount of tax for various things (e.g. letter money, alum mines, fines and forfeitures, four-wheel carriages, shops), diseases from which people died (e.g. convulsions, childbed, smallpox, dropsy, fever, lunatick (sic)).

A picture of each year gradually forms.  One of the best sections in every volume for me has been the ‘Chronicle’ which, taking a month at a time, provides often quite short reports of events that have happened all around the country.  Reports of extreme weather (frozen Thames, huge hailstones, lightning strikes), people living till 100 or more (rare then of course), odd discoveries, mysterious deaths and murders, gatherings of mobs, fires, explosions.

Most of the stories in my book His Last Fire came about because of an event or a name or a description from a report in one of the ‘Chronicles’.  Thus, the pedlar who on his death was found to be a woman; the day the Turkish ambassador’s coach broke down; the woman who didn’t leave her house for twenty years and whose carriage fell to pieces; the King’s Theatre going up in flames; a list of executions for coining in which the only woman criminal was burned at the stake (1789!).  My previous novel, The Warlow Experiment grew out of a short paragraph in the Annual Register ‘Chronicle’ for 1797.

Of course, Annual Registers are only one source.  In Sea Change the character Sarah (the mother who becomes separated from her young daughter Eve) grew out of a brief mention of a spy’s wife running off to America with a radical, while I was reading about the London Corresponding Society.  I wrote a short story about her and then Parthian Books commissioned a novel that became The Flight of Sarah Battle.

The character of Joseph in Sea Change owes a certain amount to what I read about Franz Schubert in Elizabeth Norman McKay’s excellent biography of him.  She believes that he may have suffered from cyclothymia, a lesser bi-polar condition, which I found helpful in my construction of Joseph’s difficult, erratic personality.

Mental conditions and early attempts to treat them are a theme in Sea Change even though its main subject is the love and loss between a mother and daughter.

Sarah and Eve, separated after the balloon comes down each believe the other is dead.  Which leads me to say that for all the reading and research I’ve done, over years now, for all the soaking in the period, helped greatly by those Annual Registers, my stories, short and long are always about fundamental human situations that are never pinned to one period alone.