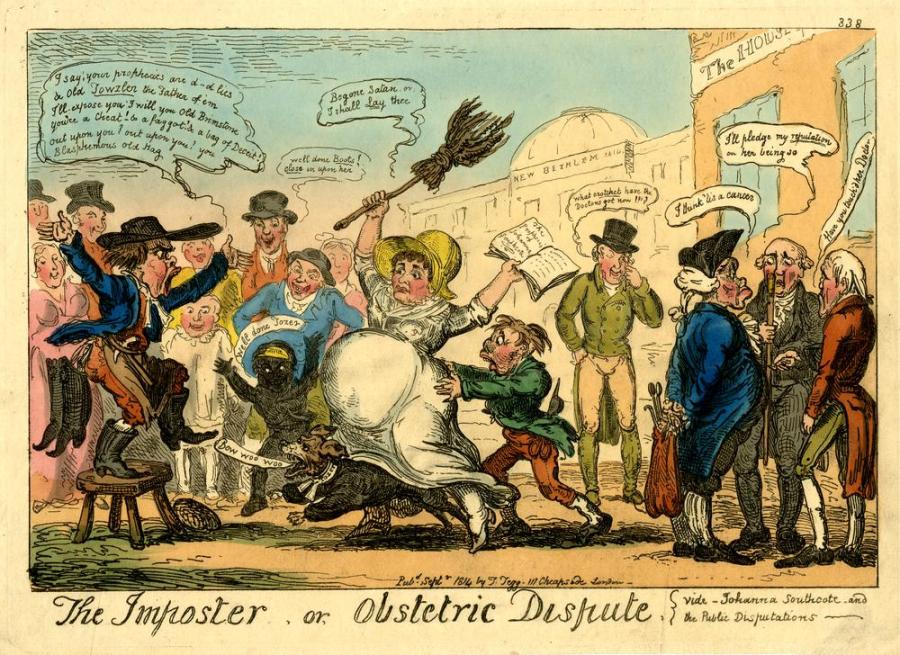 Joanna was born in 1750 and presented for baptism at the local parish church, Ottery St Mary, Devon, by parents William and Hannah on 6th June 1750. If you look to the left of the entry in the baptismal register, you’ll see a faint, handwritten notation which was added at some time. Someone has written the words ‘The Fanatic’.

If you’ve never come across Joanna before, she held very strong religious convictions and in her early 40’s began to experience apocalyptic dreams and visitations. She believed that she possessed supernatural gifts and wrote prophecies in rhyme. She claimed to be the Woman of the Apocalypse referenced in a prophetic passage of the book of Revelations, Chapter 12, verses 1-6 and that she was destined to have a son who would be the new Messiah or Shiloh (Genesis, Chapter 49, verse 10).

Over time, Joanna acquired a large following who believed in her prophecies, so much so that she began selling paper ‘seals of the Lord’ at prices varying from twelve shillings to a guinea. The seals were supposed to ensure the owners of such would receive eternal life. Joanna became so popular that she was persuaded to leave her home in Devon and move to London.

At the age of 64, Joanna announced that she was pregnant, and it was an immaculate conception. The child was to be born on 19 October 1814 and needless to sy there was a media frenzy awaiting the birth of this child, but of course much of her prophecies were viewed with a degree of scepticism.

19 October 1814 came and went, but Joanna was growing ever larger, so people believed that the birth of the child was imminent.

The Statesman of 28 November 1814 reported that her state of health had changed:

On Thursday night, she complained of great oppression insomuch, that she could not lay down on her bed, nor be in one posture, but a very short time together during the night. On Friday morning, she got some sleep, but wakened frequently, with the oppression and pain. Towards the evening she became restless again, had a very bad night and this day (Saturday is so much exhausted, that she cannot keep her head off the pillow. She complains of a giddiness in her head, and extreme faintness all over her and general pains all over. This is the state she is in at present, some change must soon take place, according to all human understanding, as she continues without taking nourishment, except the wine, which does not remain long on her stomach.

Her condition deteriorated and still no sign of the child until about 27 December 1814, when she died, with her Chief Priest Tozer and her close friend, Ann Underwood along with two or three unnamed people at her bedside.

The Examiner 8 January 1815 carried a detailed report titled Death and Dissection of the Prophetess. Just prior to her death it was said that she became insensible, but her supporters continued to believe that he wasn’t dying, but that it was merely a precursor to giving birth. A surgeon, Mr Want, of Tottenham Court Road was made aware of Joanna’s condition some seven weeks prior to her demise. He stated that the symptoms she displayed should be examined independent of the question of reputed pregnancy. He concluded from his examination that there was no pregnancy, but that she would die from her illness, but that he could give her medication to help ease her suffering and to ‘relieve the flatulency of which she was oppressed’. In order to ensure that Joanna’s carer, Ann Underwood was under no illusion that her friend would recover or that she was pregnant, the doctor wisely put his view to Ann in writing, urging her to ensure that Joanna took the medicine he had prescribed. He also noted that Joanna declined any medicine unless The Lord told her she should take it.

Joanna’s supporters believed that Joanna would appear as dead for a period of four days, she would then be revived, and the boy would be born, so her body was not allowed to be moved for burial during this period. They simply believed that she was ‘gone for a while’ and wrapped her body in blankets, put bottles of hot water around her feet and kept the room warm.

Crowds of her supporters gathered in Manchester Street to await her resurrection, all constantly asking for news. Far from waking up after the four-day period, decomposition rapidly began, aided by the heat.

Two surgeons carried out the dissection and as they anticipated, no unborn child was found, her uterine organs were healthy, however, her intestines were distended and flatulent which they believed to be the cause of her appearing pregnant. The cause of death was recorded as ‘natural’.

Before Joanna died, she advised Ann Underwood that if the child wasn’t born, that all the gifts given by her followers, for the use of the Shiloh, including a crib were to be returned to them. Joanna left a will, in which she left small financial gifts along with her wearing apparel to named followers, her will contains over two full pages of names in a list along with the item to be given to them.

Following her death there was a media frenzy, describing her as a ‘wicked woman’ taking money from people under false pretences. She was also described as a scandalous  and deluded.

The Caledonian Mercury, 31 December 1814, contained a letter which confirmed that Joanna had died at four o’clock in the morning, 27 December 1814 and was buried on 2nd January 1815 at St Marylebone.

Joanna was also said to have a left a chest containing prophecies which was only to be opened at a time of national crisis or danger and in the presence of all the Bishops of the Church of England.

Quite where this box is now I’m not quite sure, and there appears to be no mention of such an item in her will. I have read that it was at some time been deposited at the British Museum, but that it has now been lost. It’s also said to be with a member of the family and but perhaps the most likely place being that in 1957 it was presented to the Panacea Society that it remains with them, in a house which is now a museum in Bedford.