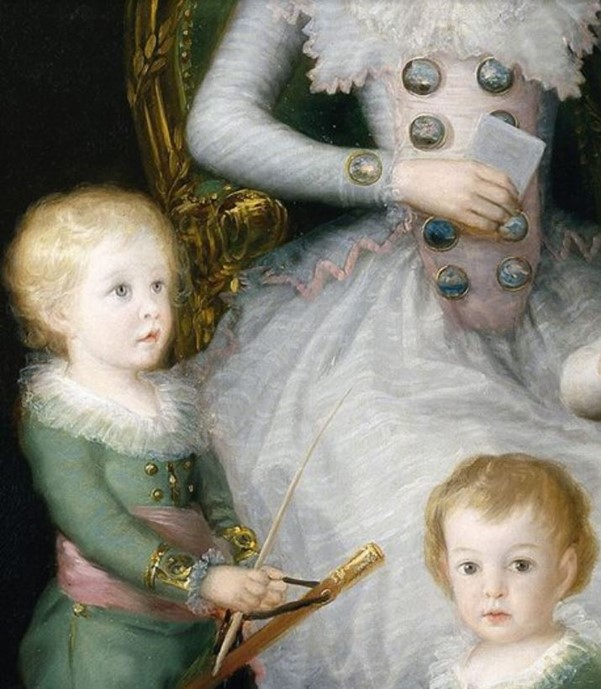 I’m delighted to welcome a new guest to All Things Georgian, Robin C. Larner. She is a retired attorney, legal writer, editor, and life-time member of the National Button Society. Robin offers antique buttons for sale and the end of the post is a link to her website. Robin is going to tell us 18th century painted buttons, which are fabulous, so I’ll hand over to Robin to tell you more about these beauties:

In the 18th century, the gross disparity between land-owning classes and impoverished citizens unable to feed their families was the fuse to a powder keg of violence that weakened monarchy across Europe. The Industrial Revolution and the excessive display of wealth by the aristocracy and a new merchant class forever changed the face of society.

One of the many extravagances of the time was the sartorial splendour of gentlemen of the first and second estates in France and the peerage of Great Britain. The men of the 18th century were the peacocks in society, often as bright, colourful, and sparkling as the ladies. Gentlemen proudly wore clothing buttons as sumptuous as jewels, among them, miniature scenes of their estates. Women also indulged this fancy.

Antique buttons of every category are highly collectible and prized by collectors today, but the appeal of historic scenes, persons, and properties today on buttons is the tangible record of the past. From the storming of the Bastille in Paris on July 14, 1789 to the death of Queen Victoria on January 22, 1901, people, places, and popular culture were captured in fashion on buttons. Sporting, literature, theatre, coiffure, hat, and clothing style, as well as portraiture and mourning, were represented on buttons.

One area of interest is the miniature painting under glass of great estates and their landscape parks. These illustrated moats, zoos, orangeries, grottoes, fountains, and follies but most appreciated are the architectural scenes of great French chateaux and English country houses. The Chateau of Raincy was embellished in the 18th century with an orangerie. This was an entire building designed for the winter comfort of potted orange trees from the garden. Many notable estates had an orangerie raised in the 18th century.

Half the fun of finding one of these little scenes is the search online to find the property today. Not all the subjects of 18th century buttons are extant. For example, the huge orangerie of the Chateau of Raincy today is a small block house, all that remains of the original building. It still shows the lovely orange brick and window trim.

The paintings of Chateau du Raincy on 18th century buttons have been attributed to Louis Carrogis, called Carmontelle (1717 to 1806). I do not know whether buttons were available to tourists, but they were probably painted for Louis Philippe Joseph, Duke of Orleans or his son in 17893.

Each button has a gouche painting under glass mounted in gold-plated copper measuring 1 and 5/8 inches. These large buttons were not fasteners, or utilitarian buttons, but ornaments amplifying them. Even though the opposite side of the coat front had exquisite hand sewn button holes, gentlemen’s coats were never buttoned. Up to twenty-four of them might amplify silk embroidery. Lucky collectors may find an 18th century boxed set.

One view of the Chateau park shows the delightful orange and white coloration of the stone. Was it orange for the obvious reason? A farm woman is visible herding fowl; a hay wagon is in the background.

Another fascinating view of the Chateau park grounds is of a man-made grotto. Among the 18th century aristocracy, a grotto was as de rigueur as an orangerie. The farm is in the rear behind trees. I was unsure whether this artifice was part of Raincy because I acquired the button without information. The same style was a good indication. Notice that one of the grotto caves has a window and door, as well as a shower.

I was delighted to find an 18th century painting of the Raincy estate landscape that included “my” grotto. Many images may be found of aristocratic grottoes in England and France. This painting is in the Musee Marmottan in France and was also painted Carmontelle.

Other 18th century garden or estate park scenes can be found in an even rarer medium on buttons, such as enamel on copper. The following hand-painted scenes are not identified but illustrate in an almost primitive style other man-made follies of the 18th century.

To find out more about Robin’s online shop and 18th century buttons, click on this link to access it Ruby Lane.