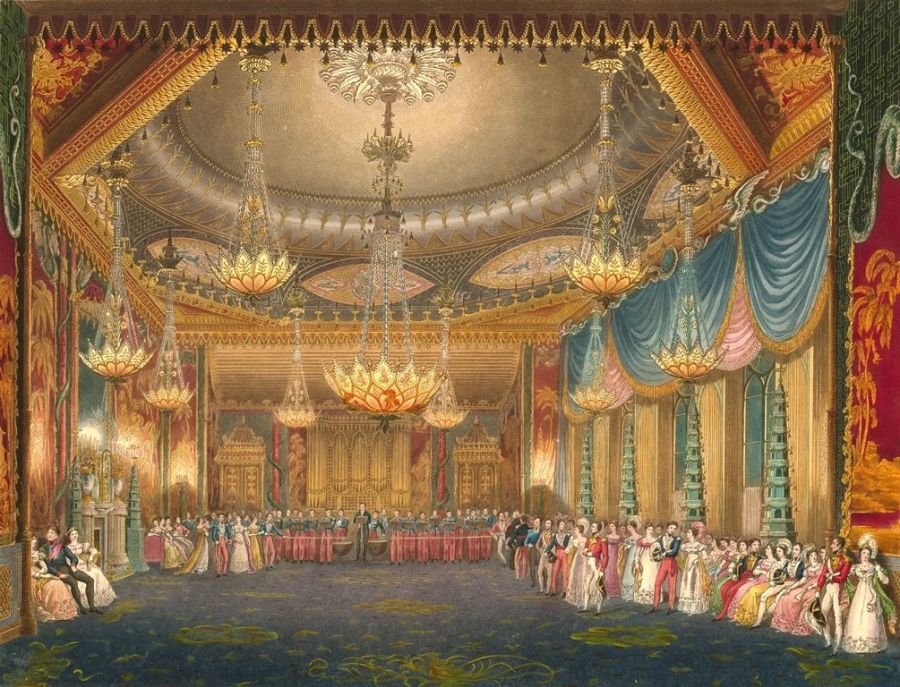 We are thrilled as always, to welcome back Regan Walker, whose latest book in the Agents of the Crown series, ‘Rogue’s Holiday‘ has just been released and for which there are further details of how to obtain a copy at the end of her article.  Today Regan is going to tell us more about Prinny’s Brighton, so, over to Regan:

When George, the Prince of Wales, reigned as the Prince Regent, beginning in 1811, and even after he became king in 1820, Brighton on the south coast of England was his favourite destination. It was fifty-four miles from London as the road winds, close enough to travel to in one day. The seaside resort provided all the pleasures of the Beau Monde without the discomforts of town. William Wilberforce, after a visit in 1815, dubbed the town “Piccadilly by the sea-side.”

Brighton loved the Prince Regent. Whatever criticisms he may have faced for his lifestyle, the Brighton newspapers celebrated his frequent visits and looked forward to welcoming all those who flocked the seaside town to enjoy what became “the Brighton Season”.

In 1822, the Brighton Gazette reported:

Gay and fashionable equipages are daily pouring into the town, and every thing gives promise of a brilliant and prosperous winter season. Many large houses on the Cliffs, Marine Parade, etc. have been engaged for Noblemen within the last fortnight… Who indeed would not fly the dirt and smoke of the crowded metropolis for a place like Brighton, where he may at once enjoy the pure and healthful breezes of the ocean, and a salubrious climate, without being subject to the dreary ennui of a country life?

For the Prince, Brighton became a fantasy escape from his narrow-minded and staid parents who failed to appreciate their son and heir. More than anyone, they were responsible for making Prinny the Grand Corinthian. Thus, it should have come as no surprise that the Prince would build a palace that would be a mogul’s dream where he could entertain his eclectic bevy of friends in grand fashion, including of course, the characters in my story.

The Marine Parade that ran along the shore and the Old Steyne that fronted the Pavilion were wide paths available for a morning or afternoon stroll. But one could certainly keep busy in Brighton. Visitors were offered an endless array of balls, concerts, soirees, private dinners, theatrical events, interspersed with riding, card games and other entertainments.

The Pavilion’s designer was architect John Nash who built it in three stages until it became the palace we think of today with its many domes and minarets. There, Prinny reigned as the beneficent patron of the foremost artists and literary men of his age and entertained his diverse friends in the rooms decorated in chinoiserie style to look like the home of a Chinese emperor who lived in a kingdom of flowers and perpetual spring. Rooms, such as the Music Room, pictured above, which Prinny kept overheated with candles and gas lamps.

As the town grew, entertainments were added to rival those of London. Hotels, shops, theatres and a racecourse stood at ready. Castle Square next to the Pavilion and half of North Street were the Bond Street of Brighton where one could buy cloth, shoes, cigars, porcelain and many other things. North Street was home to sixty shops by 1820, the year of my story. By 1808, Brighton also had a department store, Hanningtons, on North Street. Added to that, there were dozens of taverns and hotels, that featured balls and card games. All of the taverns, shops, shopkeepers and hotels mentioned in Rogue’s Holiday existed at the time.

The Castle Inn adjacent to the Pavilion had an assembly room and a smaller room used as a tearoom. The Old Ship Inn, the oldest hotel in Brighton, also had a tearoom. And there was yet another tearoom erected in 1805 in the gardens of a public house a mile away in Preston.

Among Brighton’s many attractions was sea bathing, where one could be towed to the water in small boxes on wheels to swim, as my heroine does, in the altogether or, if you prefer, in one of the gowns provided. The men’s and women’s bathing areas were separated, of course. Dippers (for women) and bathers (for men) were employed to make sure the person’s head was dipped into the water. Dipping took place year round since the cold water was considered to be good for the health.

A wholesale fish market was held on the beach, supplied by 100 ships that sailed in the afternoon or evening and returned in the morning. Mackerel were in season from May to the end of July. Also, Sole, Brill, Turbot (common at all seasons) and Dories were in plentiful supply. As you will see in Rogue’s Holiday, while the fish market proceeded on shore, the boats hoisted their nets to dry.

Among Brighton’s most famous residents was Prinny’s Catholic wife, Maria Fitzherbert,  a virtuous woman who took her marriage to Prince George seriously even if he did not. All of Brighton respected her. The king must have had her on his mind when he died in 1830, for he was buried wearing a locket containing her miniature.

A curious feature in the category of equipages was the fly carriage, a small covered carriage you might see around Brighton drawn by a man and an assistant. They were very convenient for navigating the narrow streets and had room for two. The ones that Prinny and his noble friends used for midnight excursions were dubbed “fly-by-nights”.

Prinny’s yacht, the HMY the Royal George, was commissioned in 1817 and could often be seen anchored off shore of Brighton when he was in residence. In my story, set in 1820, the king invites my characters to dine onboard. Among Prinny’s friends invited that evening were Lord Alvanley, Sir Bellingham and his wife Harriot, Sir John Lade and his wife Letty, and Elizabeth Conyngham, Marchioness Conyngham, the king’s mistress.

I have described the Royal George, in detail as my research provided. The great cabin really did have windows of plate glass, a skylight, gilded dark wood panelling, a Brussels carpet beneath a mahogany table and a pianoforte, among other accoutrements. As my hero, Sir Robert, said, the king liked to travel in style. 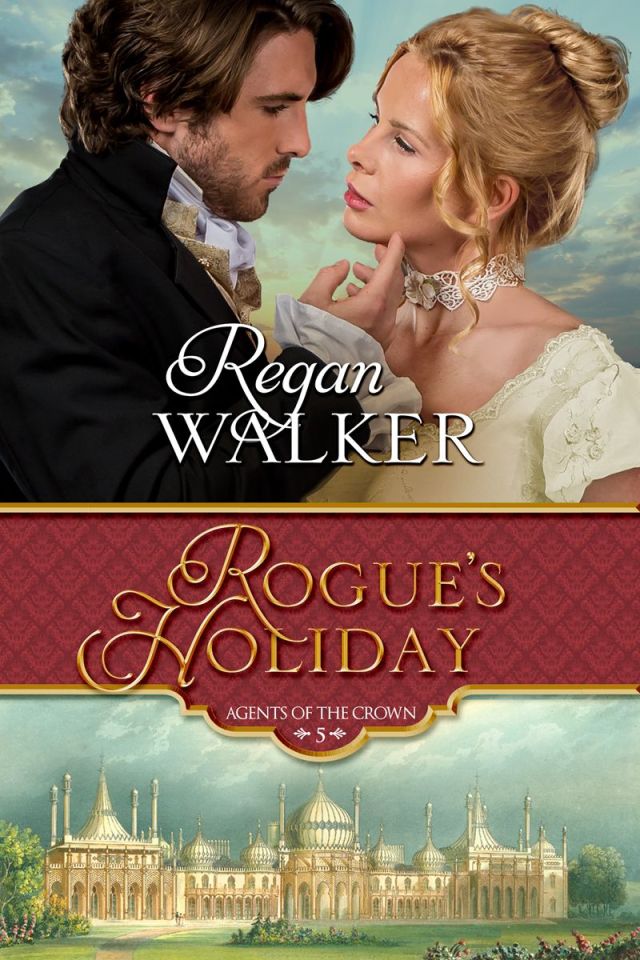 Even a spy needs a holiday…

​Robert Powell’s work as a spy saves the Cabinet ministers from a gruesome death and wins him accolades from George IV. As a reward, the king grants him a baronetcy and a much-deserved holiday at the Royal Pavilion in Brighton where he thinks to indulge in brandy, cards, good horseflesh and women.

But when Muriel, Dowager Countess of Claremont, learns of Sir Robert’s intended destination, she begs a favour…to watch over an “errant child” who is the grandniece of her good friend living in the resort town. Little does Robbie know that Miss Chastity Reynolds is no child but a beautiful hoyden who is seemingly immune to his charms.

Chastity lives in the shadow of her mother and sisters, dark-haired beauties men admire. Her first Season was a failure but, as she will soon come into a family legacy, she has no need to wed. When she first encounters Sir Robert, she dubs him The Rogue, certain he indulges in a profligate lifestyle she wants no part in.

In Brighton, Robbie discovers he is being followed by friends of the conspirators who had planned to murder the Cabinet. Worse, they know the location of Chastity’s residence.

Below are all the ways you can find out about and purchase Regan’s books, so feel free to click on the highlighted links.

A Prince’s Passion: The Life of the Royal Pavilion by Jessica Rutherford

Brighton and Hove by Nicholas Antram and Richard Morrice

Prinny and His Pals by Tom Ambrose

The Brighton Road by Charles Harper

4 thoughts on “Prinny’s Brighton, Piccadilly by the Sea-side By Regan Walker”