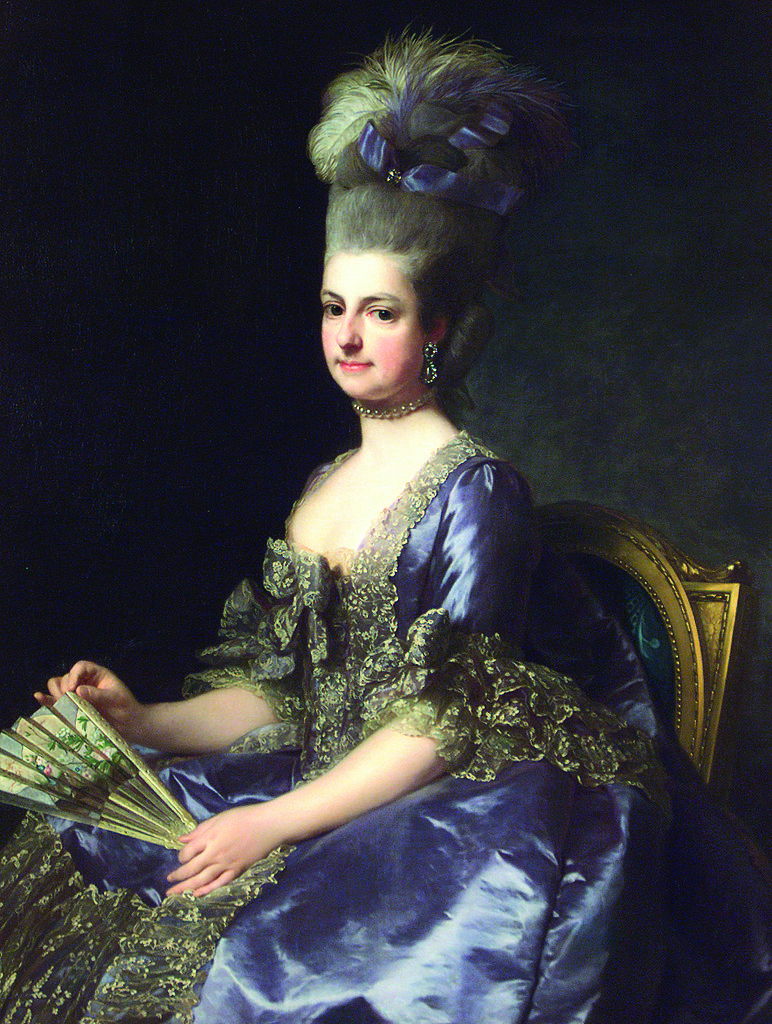 Alexander Roslin  (1718-1793) was a Swedish portrait painter who worked in Europe painting the aristocracy, and whose work we have only recently become familiar with. This post, we have to confess contains nothing new and is somewhat self indulgent because we’re ever so slightly in love with his paintings. However, we thought, if you’ve never come cross him before you might enjoy taking a quick peek at his some of his work.

This hope hopefully gives a glimpse into the detail of his work and shows his skill at recreating fabric, jewels and flowers using the medium of paint. We would love to know what you think of his paintings and whether you like them … or perhaps not. Do let us know.

We begin with a portrait of Jeanne Sophie de Vignerot du Plessis, also known as the Countess of Egmont Pignatelli, who hosted a salon which gathered “the literary celebrities of the days”, including Voltaire and Rousseau, and opposed Madame du Barry. The recreation of her dress, we think is absolutely stunning, so much detail when you look at the small image. The idea of her being an edcuated woman being shown with the addition of music and a book. We love the little dog at her side, obviously wanting some attention.

Next we have Anastasia Ivanovna, Countess of Hesse-Homburg, Princess Trubetskaya (1700-1755). Anastasia belonged to the leading members of the Russian Imperial court and aristocratic life, and often hosted the monarchs as guests in her home. She was also appointed Dame of St Catherine, (which is something we’ve looked at in a previous post about Princess Charlotte of Wales),and lady in waiting to Empress Elizabeth. She left for Germany in 1745, and did not return until 1751, after which she became a noted philanthropist. Again, she is accompanied by a book and her little dog, again looking for some attention from its mistress – perhaps a trademark of Roslin’s.

We move on to Reichsgräfin von Fries, née Gräfin Anna d’Escherny (1737-1807). As we haven’t managed to find out anything about this lady we’ll simply focus on the painting itself. Again we have an indication of her love of music, she’s sporting a plumed headdress and wearing a white satin gown with contrasting fur-trim, which is so realistic you could almost stroke it; the sleeves trimmed with the most exquisite lace.

Marie Amelie, Duchess of Parma (1746-1804), was the daughter of Empress Maria Theresa and Emperor Francis I and the sister of Queen Marie Antoinette. This time no sign of music or books, just a fan, but the detailed bead work on the bodice is excellent.

This young woman’s identity seems to have become lost in the mists of time, but the detail in Roslin’s work remains in this portrait, even down to the detail in the corsage she’s wearing.

To finish, we have a portrait of Grand Duchess Maria Feodorovna (1759-1828), the Empress consort of Russia as the second wife of Tsar Paul I. Maria was described as ‘tall, fair, fresh, extremely shortsighted and inclined to be stout‘. This court dress, we think, makes quite a statement and naturally she’s wearing the Order of St Catherine. Apparently she dressed like this every day as she loved the pomp and ceremony associated with court life and made the same demand on her entourage – can you imagine being dressed like this, all day, every day?