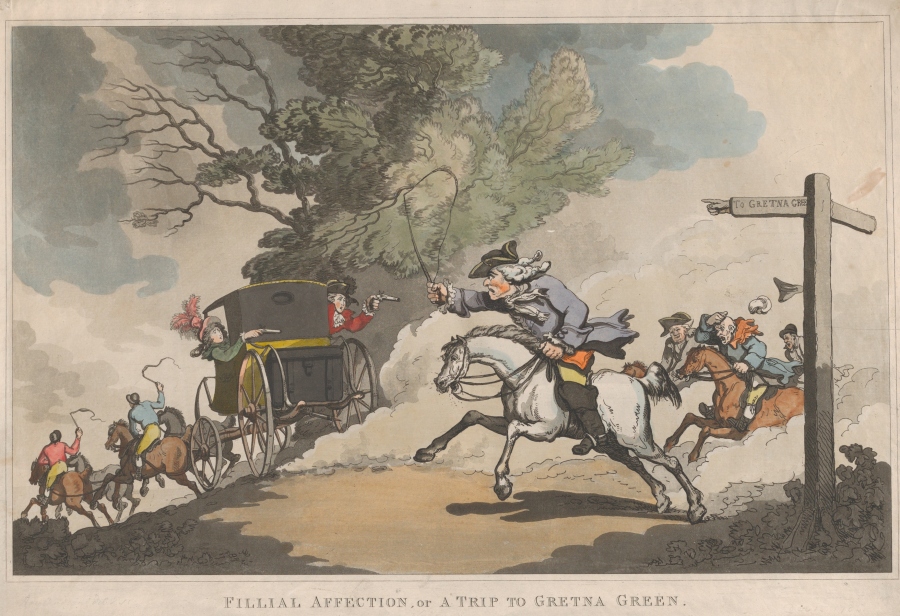 Amelia Maria Frances Elwes, known as Emily, was the only daughter – and heiress – of George Elwes of Marcham Park in Oxfordshire and Portman Square in London. The newspapers were probably over-egging the pudding a bit when they reported that she stood to inherit more than one million pounds, but she clearly stood in line to become an extremely wealthy woman. Of course, with those kind of prospects, Emily wasn’t short of suitors, but her heart was already given, to a man named Thomas Duffield.

Two years earlier, George Elwes had allowed Thomas to ‘pay his addresses’ to his daughter, but ‘some changes in the opinions of the governing part of the family had arisen, and other suitors were strongly recommended to the young lady’. Emily had other ideas, though.

George Elwes owed his immense fortune to the miserliness of his own father, John Elwes.

Known as both an eccentric and a miser, John Elwes was born John Meggot, the son of a successful Southwark brewer. Given a classical education at Westminster School, John then embarked on the Grand Tour, becoming known as one of the best horsemen in Europe and introduced to Voltaire. He not only inherited his father’s substantial fortune, but also that of his uncle, Sir Henry Elwes, 2nd Baronet (John took his uncle’s surname too). Sir Henry was also a miser, and probably it was his influence which steered John on the path which would come to define his life: penny pinching to the extreme. It’s difficult to separate fact from fiction when it comes to John Elwes’ life. He was said to wear rags and wear a wig that a beggar had thrown away, let his fine Georgian mansion, Marcham Park become so dilapidated that water poured through the ceilings in heavy rain and famously, when travelling, always carried with him, in his pocket, a hardboiled egg to eat. Apart from that, he would rather starve than buy food during his journey. It’s thought that John Elwes was Charles Dickens’ inspiration for Ebenezer Scrooge. Although he never married, John had two illegitimate sons who inherited some of his fortune, if not his miserly inclinations. One of those two sons was George Elwes, Emily’s father, who gained Marcham Park.

And what of Emily’s suitor? Thomas Duffield was born in 1782, the son of Michael Duffield of Syston near Grantham in Lincolnshire. He had gained his B.A. at Christ Church, Oxford in 1804 and then studied for his M.A. at Merton College. Following that, from 1807 (until 1811) Thomas was a fellow at Merton. Perhaps the Elwes family thought that Thomas’ income was insufficient, and that he was planning to live off Emily’s fortune?

With Thomas barred from the Elwes house, a plan was hatched with his friends and, it seems, with the lovestruck Emily’s knowledge and consent. Emily’s mother had a female friend staying with her, and one of Thomas’ co-conspirators contrived to be a guest in the Elwes family home in the first weeks of 1810 where he passed in the guise of this unnamed lady’s lover and future husband. One morning – just a few days before Valentine’s Day – he persuaded Mrs Elwes and her friend to go shopping together and once they had departed a chaise and four drew up to the house. George Elwes inconveniently met his daughter and his (un)gentlemanly house guest in the hallway as they walked to the front door; in answer to her father’s questioning, Emily said she was just ‘going to her mamma, who was waiting for her’. It appeared all too innocent; Emily, wearing neither a hat nor bonnet, was clearly not dressed for an outing but just popping out to her mother’s carriage on a quick errand before hurrying back inside.

The lack of headwear notwithstanding, Emily was handed in to the waiting chaise, where Thomas Duffield sat ready to spirit her away. His job completed, Thomas’s friend nonchalantly walked back in to the hallway. When George asked about his daughter’s whereabouts he was told that she had been delivered ‘to the man destined to make her happy; and that she was off to Gretna Green’.

Servants were sent after Mrs Elwes and she returned in a panic. Emily’s parents raced northwards, but having reached St Alban’s with no sight or sound of their daughter they gave up their search and returned home. While Thomas and Emily headed for the Scottish border, the newspapers picked up the story.

An elopement has taken place, which will make a very considerable noise.

The couple got safely to Gretna Green where they were married by the hale and hearty ‘old Parson Joseph’ (aka Joseph Paisley) who ‘drinks nothing but brandy, and has neither been sick nor sober these forty years’. Reputedly, Thomas Duffield paid Parson Joseph 50l. sterling to perform the ceremony.

With the deed done, George Elwes decided to make the best of things. He insisted that his daughter and new son-in-law go through a second marriage ceremony, just to be sure things were legal and above board, and this took place at Marylebone church  a month later. In time, he was completely reconciled with his daughter, and grew to be fond of Thomas.

The story didn’t end there, however. Several years before Emily’s elopement and subsequent marriage, George Elwes had made a settlement (in October 1802).

George Elwes conveyed real estates upon trust for the benefit of his daughter; but he declared that, if she married under age, and without his consent, the trustees should hold the estates in trust for him and his heirs.

Emily had been a minor when she married (she was born c.1792 and so was 10 years younger than Thomas), and she certainly did so without her father’s consent. But, Thomas had been accepted as part of the family since then, and had been given possession of the Elwes’ mansion house. Upon George Elwes’ death, he left a tangled legal muddle behind him, as he never revoked the earlier settlement despite the fact that he had verbally made it clear that he wanted Emily and Thomas Duffield to inherit his estates. Emily’s mother, who had remarried to a gentleman named William Hicks, contested her first husband’s will in a protracted and complicated legal case, to the potential detriment of her son-in-law and grandchildren, but the Duffields managed to retain their rights to the Marcham Park estate and Emily and her mother clearly put any disagreements behind them. (Amelia’s will, written in 1824 during Emily’s lifetime, left her daughter and her Duffield grandchildren many personal bequests.)

After bearing nine children (three sons and six daughters) Emily Duffield died at the age of 43, and was buried 18 August 1835 at All Saints in Marcham. Thomas, who was an MP for Abingdon between 1832 and 1844, married for a second time, to Augusta Rushbrooke by whom he had four further children. He died in 1854 by which time he was living at The Priory in Wallingford while his son by Emily, Charles Philip Duffield, inhabited Marcham Park.

N.B.: County boundaries have changed over the years; Marcham Park in now in Oxfordshire, but was then in Berkshire.

New Reports of Cases Heard in the House of Lords: On Appeals and Writs of Error; and decided during the session 1827-8 by Richard Bligh, volume 1, 1829

2 thoughts on “The miser’s granddaughter: inheritance and elopement”