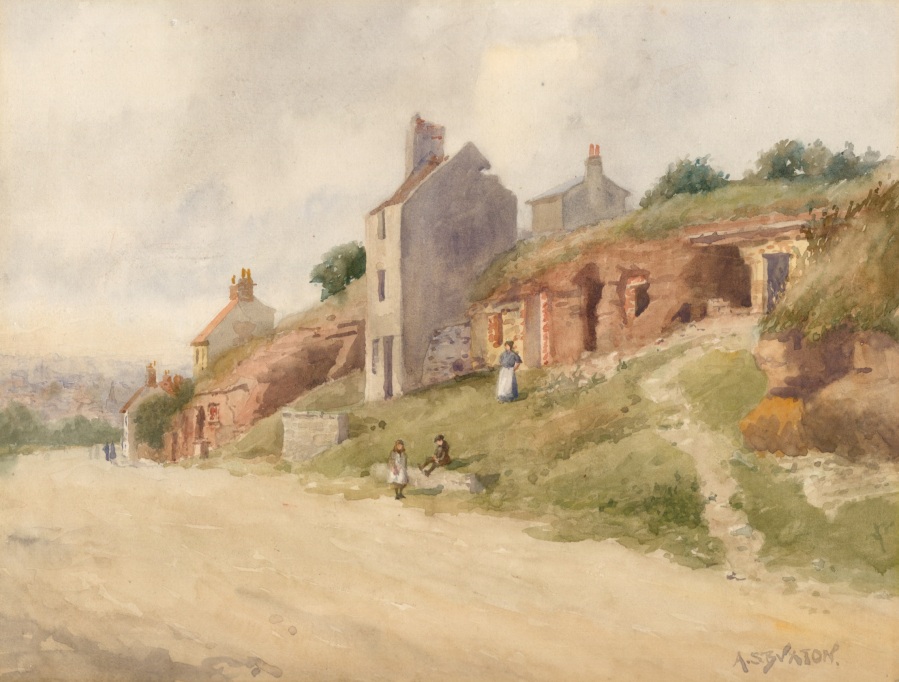 Known as the ‘rock houses’ they are a well-known feature of the town of Mansfield, Nottinghamshire in the East Midlands and only a few miles away from Newstead Abbey, home of Lord Byron.

Rumour has it that Robin Hood and his Merry Men had used the rock houses as hiding places – true or not we will never know (it’s a great legend though), but either way, they were extremely old, cut into the local sandstone and were used as homes until the beginning of the 1900s.

Robert Watson (1779-1839) and his wife Elizabeth née Moor, were one such couple who lived there in the early part of the 19th century. As Robert died prior to the first census taken in 1841, unfortunately, there is no information about his early life, occupation etc, we do however know that they had six children – William, Robert, Mary, John, Elizabeth and their youngest Sarah, who was born in 1810.

Their lives would not have been easy, all eight of them living in such a small dwelling, trying to make ends meet to avoid the poor house. It was often thought that these houses were the modern equivalent of squats, however, this was not the case as confirmed in a letter of 1843 from the Poor Law Commission Office, which stated

In an 1813 newspaper report, we learn that whilst those rock houses had probably been there for a long time they were by no means safe and the newspaper article reported that

a melancholy accident happened at one of the rock houses – as Robert Watson with his family were partaking of breakfast the roof suddenly fell in and completely buried one of his children, about three years of age, it was dug out of the ruins dreadfully bruised and dead – the rest of the family escaped unhurt.

That child was their youngest daughter, Sarah. By 1841, Elizabeth Watson was widowed but remained in the family dwelling, after all, where else could she have gone?

By this time the small community numbered just under 100 people, many were stone masons, framework knitters and chimney sweeps. One of the main occupations prior to 1841 was that of besom maker (a broom made from twigs, tied with a stick), but by 1841 only two remained – John Cheesman and Joseph Freeman.

One of the framework knitters (an occupation we have looked at previously) was George Gilbert (1779-1853), who lived there with his wife Sarah and their grandson a John Day, aged 12, according to the 1841 census, their son had died in childhood and their daughter Roseanna had married the son of the neighbouring family, Robert, son of Robert and Elizabeth Watson who we mentioned earlier.

Sarah’s marriage to Robert took place at St Peter and St Paul church, Mansfield on March 1st, 1826, so, a long and happy life ahead of them, or so you might think, but this marriage was to be very short-lived.

At the end of August 1826, Robert Watson appears to have moved from Mansfield to Uppingham, Rutland, (with or without his new bride is unclear) at which time he was arrested for robbery along with a companion Henry Jones. It was alleged that they broke into the slaughter-house of a Mr Fludyer and stole a butcher’s frock, an apron and a piece of venison which was discovered wrapped in the frock. Both Robert and Henry were committed to trial at Oakham at the following session. GUILTY AS CHARGED.

Robert, a stonemason, was sentenced to transportation, despite petitions from his parents Robert and Elizabeth, of Mansfield, who stressed that he was of good character, from a large family and that he had never been in trouble before and how distressed the family would be if he were to be imprisoned.

The court was having none of it and Robert was sent to The York, a hulk or prison ship to await transportation, where he remained until April 1827 when he boarded The Marquis of Hastings and began the long voyage that was to take him to New South Wales where his sentence of seven years was to take place.  The convict register of New South Wales described Robert as 5 feet 9 inches, brown hair, ruddy complexion, grey eyes, missing one of his upper front teeth.

Quite how good his conduct was we may never know, but it can’t have exactly been exemplary, as six years into his sentence in 1833, he was sent to Norfolk Island, for life. This was however rescinded at the beginning of 1841 and he was given a Certificate of Freedom.

So, what of his new bride? Did she await his return? Well, it appears that Roseanna continued to live in one of the rock houses but wasted little time finding a replacement for Robert, clearly, she felt he would never return.

A little over two years after Robert’s departure Roseanna presented her first child for baptism, at the same church in which they had married, so clearly the child was not Robert’s son and no father was named in the register, a performance which she repeated virtually every two years until 1844, on each occasion Roseanna gave her address as Rock House, so she had obviously remained there after husband had been transported. At some stage, she took up with a John Day, as to whether he was the unnamed father of her children, who knows, but her eldest son, named John, was with his grandparents on census day in 1841.

People continued living in the rock houses until the turn of the century, they are now sadly derelict and overgrown – such an interesting piece of local social history, all but disappeared.

Rock Houses by A.S Buxton. With thanks to Mansfield Museum who hold the copyright.