We have looked at trade cards on a couple of previous occasions and it appears that many of our readers like them as much as we do. So, today we’re going to look at a specific trade – that of a druggist or chymist.

Our first offering is a lovely card for a Joseph Leaper, who was running his business in Bishopsgate, London. We love that not only did he make up lotions and potions, but also diversified into coffee, tea, chocolate and snuffs, a real 18th-century entrepreneur.

As the card is giving away few clues we can’t be sure whether it relates to him Joseph senior or junior who took over the business on his father’s death in 1750. His will made no clear mention as to who was to take over the business after his death, but family were clearly important to him and he made provision for both his children grandchildren and so if this trade card postdates Joseph senior’s death, then it’s safe to assume his son Joseph took over the reins In Joseph senior’s will he specifically wished to be buried with his wife in Whitechapel, or, if he died in Derbyshire, to be buried at Osmaston, near Derby. Joseph senior got his wish to be buried with his wife and didn’t make it to the pretty village of Osmaston. He was buried 21st May 1750 at St Mary’s, Whitechapel.

The next one conjures up quite a dramatic image, someone clearly spent a great deal of time designing this. Something this detailed and imaginative would probably have been expensive to produce. You could spend hours just reading the symbolism contained within it.

Richard Siddall who was operating his business from the Golden Head, Panton Street, near the Haymarket. He was a maker and seller of all manner of chymical and Galenical medicines. He also sold ‘The Elixir for the Asthma and for gout and rheumatism’.

We know that he was already trading from that address when he married on 9th November 1751, as the London Magazine, or, Gentleman’s Monthly Intelligencer, Volume 20 as it confirms his marriage to Miss Sukey le Febre (sic), fourth daughter to John le Febre (sic). In May 1753 Richard was declared bankrupt, so we have no idea what became of him after that. We do, however, know that his business was taken over by Daniel Swann, as he used an identical trade card showing the same address, just with a name change.

Our third one is for GJ Beavan who was trading at 114 High Street, Cheltenham, so, a fashionable spa town, an ideal place to visit for the upper classes and potentially lucrative for the businessman.

This one tells us little about who Beavan was, but we do know that his company took over the business from Paytherus, Savory and company who also owned a warehouse on Bond Street, London and who were involved from 1793, in the production of Cheltenham Salts. Beavan’s was certainly trading under its new name from 1818 onwards according to the newspapers and we see this advert below for one of their products in 1832.

The final one belonged to John Kempson Esq., a druggist of Snow Hill, London and according to Yale Centre for British Art was dated c1770. This helps us to narrow it down and we have found that John died in 1788 whilst getting into his carriage at his home in Cheam, Surrey. His will confirms that the main beneficiary of his estate was his wife, to whom he left £1,000, so not an inconsiderable sum of money. John was buried at St Dunstan church, Cheam on 6th November 1788, aged 77.

It would appear that John didn’t work alone but had a chemist Richardson Ferrand working with him according to a newspaper report in the Hull Advertiser and Exchange Gazette of May 19th, 1804. 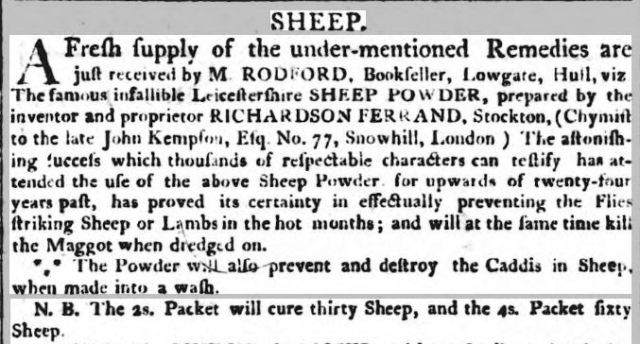