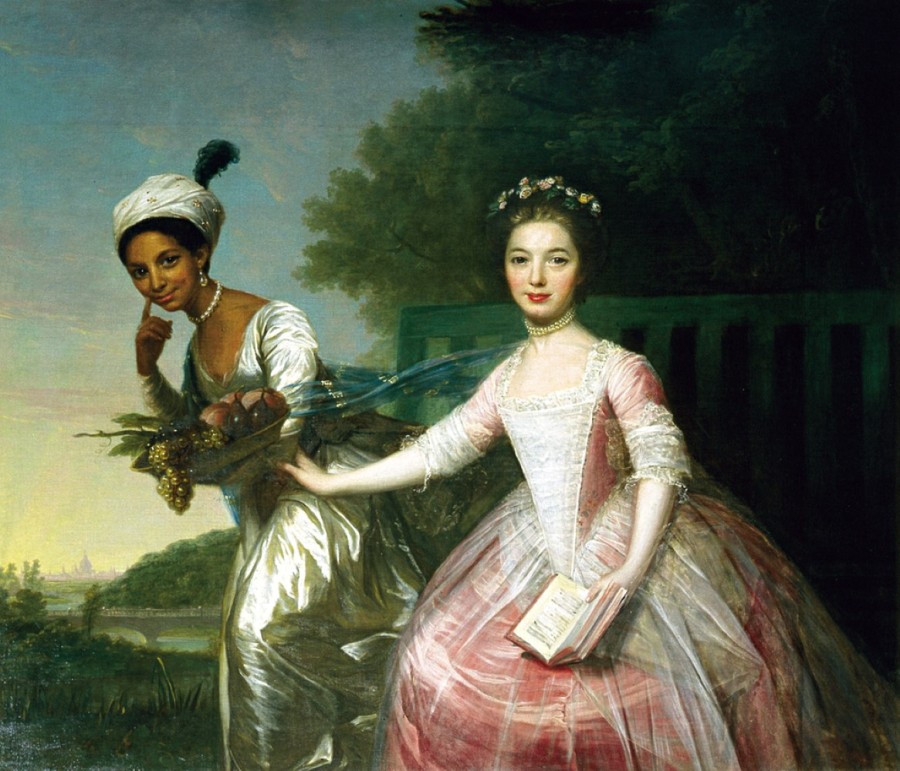 We’re very excited to be able to bring you some new information about Dido Elizabeth Belle.

Dido was the natural daughter of a former African slave woman and Sir John Lindsay; she was brought up alongside her cousin, Lady Elizabeth Murray at their great-uncle William Murray, 1st Earl of Mansfield’s estate, Kenwood House in Hampstead, London. You may have seen the film about Dido’s life, Belle (2013).

Well, today you are going to be the first to know a little bit more about Dido’s family.

Her father, John Lindsay, from a well-connected Scottish family, was a career naval officer who, in the summer of 1764, was knighted and eventually became an admiral.

It is well-known that he fathered Dido; less well-known are his other illegitimate children. In his will, written in 1783, Lindsay left a sum of money for the benefit of his two ‘reputed’ children, John and Elizabeth. It has until now, been assumed that the Elizabeth referred to in Lord Mansfield’s will was Dido, but we now know this to be incorrect. Sir John didn’t mention Dido in this document as she was provided for by the Earl of Mansfield and his family.

Speculation has long been rife as to the birthplace and true identity of John and Elizabeth (if there actually was an Elizabeth) … well, we can shed some light on this, and share some information about two further children as well.

Dido Elizabeth Belle was the eldest of Lindsay’s brood of illegitimate offspring, and she was born in June 1761 (her year of birth worked out from a notation against her baptism). Lindsay had arrived in Jamaica in the summer of 1760 aboard HMS Trent (1757), a Royal Naval 28-gun Coventry-class sixth-rate frigate of which he was captain. He had been appointed to the ship since its launch and had already seen action off Cape Finisterre, Spain in 1759 and at the Siege of Quebec (Battle of the Plains of Abraham) in the same year. During the September of 1760 (Dido, if she was born in June 1761, must have been conceived around this time), the Trent was patrolling off the coast of Senegal, returning back to Jamaica at the end of the year.

On 4th January 1761, the Trent, captained by John Lindsay, captured the richly laden French merchant frigate Bien Aimè off Cape Tiburon after a forty-five-minute duel, arriving back in Port Royal, Jamaica with his prize later that month.

At Dido Elizabeth Belle’s baptism, which took place in England some five years after her birth, her mother was named as Maria Bell. Reputedly, Maria was a slave being transported in a Spanish galleon which Lindsay had captured.

Thomas Hutchinson, the former governor of Massachusetts met Dido and recounted something of her background in his diary. He claimed that Maria Bell was brought to London on board the slave ship, heavily pregnant. However, it was not a slave ship but the captured Bien Aimè carrying sugar (which had been destined for France), which was the Trent’s prize and which sailed into the Downs under convoy in May 1761.

And, far from travelling home to England himself, Lindsay appears to be fully occupied elsewhere. In the early summer of 1761, the Trent captured a French slave ship off the coast of Guinea-Bissau and brought her into Bunce Island, off Sierra Leone.

On 31st October, he brought two prizes into port at Kingston, Jamaica, a Dutch schooner and a sloop richly laden with indigo, which he took near Haiti. And, there is one further pressing reason why John Lindsay must have been present on the island of Jamaica around May 1761.

Between March and July 1762, John Lindsay participated in the Siege of Havana under Vice-Admiral Sir George Pocock. Just before he had sailed from Jamaica, however, he had welcomed the arrival of a second child, a son named John Edward Lindsay who had been born on 19th February 1762. This child was not baptised until 6th November that year, in the church at Port Royal; the record in the baptism register described him as John Edward, son of John Lindsay and Mary Vellet, ‘a mulatto’.

Unfortunately, little John Edward was destined to die just over a month later. He was buried on 16th December 1762 at the Palisadoes Cemetery at Port Royal, aged almost ten months.

Captain Lindsay returned to England where, on 10th February 1764, he was knighted. Subsequently, he served during 1764 and 1765 at Pensacola in Florida as the senior officer.

It is not known whether he took Dido and her mother with him, but a Scotsman named George Gauld did make the journey. Working as a surveyor, Gauld made a sketch of the harbour at Pensacola, so we are able to see the scene which would have greeted Sir John Lindsay as he arrived there.

The last two months of 1766 saw three events which had an impact on Lindsay’s life, although he may not have immediately been aware of all of them; while we cannot be sure of Lindsay’s whereabouts, Dido was certainly in London at the time.

Dido Elizabeth Belle was finally baptised on 20th November 1766 at 5-years of age; the ceremony took place at St George’s Church in Bloomsbury. Her father, now Sir John Lindsay, was not present nor did he bestow his surname upon Dido.

However, five days earlier, on 15th November 1766, another daughter had been born to Lindsay. The girl was named Ann and her mother was ‘Sarah Gandwell, a free negro’. It appears that Lindsay must have been in Jamaica in the first months of that year and that, nine months later, Ann was born on the island.

On 8th December 1766, yet another daughter was born, Elizabeth whose mother was simply named as Martha G. Elizabeth, daughter of Sir John Lindsay was baptised a month later, on 10th January 1767, at Port Royal. This is the Elizabeth named in Sir John Lindsay’s will.

Where was Sir John Lindsay at this time? Had he travelled back to Jamaica after Dido’s baptism, in time to be present to bestow his name on his third daughter at her own baptism ceremony?

If so, then he soon crisscrossed back across the ocean for, during 1767 and 1768, Sir John served as MP for Aberdeen and Montrose. A very big clue that he had indeed been present in Jamaica during the January and February of 1767 can be found in the birth of yet another child.

John Lindsay, son of Sir John Lindsay and Francis [sic] Edwards, a ‘free mulatto woman’ was born on 28th November 1767. Both he and Elizabeth are the two youngsters Lindsay referred to as his ‘reputed children’ in his 1783 will.  It had previously been thought – erroneously – that Elizabeth and John had been born in Scotland.

Frances Edwards was around 18-years of age and had been baptised herself in the church at Kingston just two years earlier.

At Kingston, on 2nd March 1768, we find John’s baptism recorded in the church registers; Ann was not baptised until 10th July 1768 at Port Royal, when she was 20 months of age. As she was not acknowledged in Lindsay’s will at all, possibly she died young although we have not found a burial for her on Jamaica.

After years of ‘sowing his wild oats’, Sir John Lindsay married Mary Milner (1739-1799) on 17th September 1768. The couple had no children of their own and we have to assume that Lindsay was a faithful husband as we have found no further records of illegitimate children belonging to him. But, with Dido settled at Kenwood with her great-uncle, the Earl of Mansfield and her cousin, Lady Elizabeth Murray, Lindsay did not neglect his former lover, Maria Bell, Dido’s mother.

In 1773 Lindsay began a process to transfer a piece of property he owned in Pensacola, Florida to Maria Bell(e), with the requirement that she build a house there. At the time, Maria Bell(e) was living in London but a year later, when the deal was finalised, she had travelled to America. In the document, she was referred to as ‘a Negro woman of Pensacola, formerly of Pensacola, and then residing in London’.

The house that Maria lived in was on the corner of Lindsay and Mansfield streets (now Reus and Zaragoza streets), in what was then a high-class area owned by the British.

But, during the War of Independence, the Spanish gained control after the 1781 Battle of Pensacola; they compiled a list of property owners which included a Mrs Bell, widow. This is probably Dido’s mother and, if so, is the last known sighting of her.

Peter Hill (1754-1837) was an Edinburgh bookseller and a great friend of the Scottish poet, Robert Burns. Elizabeth died at Dalmarnock, Glasgow on 26th January 1842, at the age of 76, of ‘decline’, and was buried by the side of her husband in the Canongate, Edinburgh.

John Lindsay (born 1767), retained the Lindsay name and joined the East India Company’s army on the Madras Establishment in 1788. In 1803, he wrote his will, naming his sister Eliza Hill, her husband Peter and his ‘girl and child’, as he referred to his young daughter and her Indian parent.

Lindsay’s own mother, Frances Edwards was still alive and named in his will; she was residing on Rum Lane in Kingston, Jamaica, a thoroughfare leading to the harbour, so he clearly never forgot his Jamaican roots.

It would be a further 18 years before Lindsay died; by that time he had risen from a captain to a brevet colonel. He met his end either at Chitradurga (or Chittledroog as Lindsay knew it) in Karnataka or at Kannur (Cannanore), India (sources disagree on the exact place) on 30th January 1821; he was buried the next day at Kannur. Lindsay’s statement of accounts shows that he died a wealthy man owning two properties, ensuring that ‘his girl and child‘ would have been well-provided for.

At Cannanore, while commanding the Provinces of Malabar and Canara, Col. John Lindsay, of the 7th regt. N.I.

To a mild, amiable and benevolent disposition, he added gallantry, firmness and manly conduct, which rendered him as valuable to society and his friends as he was to his profession.

To recap, we are now able to give the following children for Sir John Lindsay, all, with the possible exception of Dido, we believe to have been born on the island of Jamaica.

N.B. In the List of Inscriptions on Tombs and Monuments in Madras, vol. 2, by Julian James Cotton (Madras, 1946), under the entry for John Lindsay’s burial in 1821, it is asserted that he married a Miss Diana Bunbury in Madras on 15th January 1816; this is incorrect. The John Lindsay who married Diana Bunbury was John Francis Vesey Lindsay (1783-1830).

THERE ARE SEVERAL MORE ARTICLES AND NEW INFORMATION ABOUT DIDO ELIZABETH BELLE AND HER FAMILY, PLEASE CLICK here  TO READ THEM AND PERHAPS CONSIDER SUBSCRIBING TO ALL THINGS GEORGIAN TO RECEIVE FURTHER UPDATES.

Real Story of ‘Belle’ Has Pensacola Connections by Sandra Averhart, 23rd May 2014

National Archives: PROB 11/1665/109, Will of John Lindsay, Colonel by Brevet in the service of the Honorable East India Company on their Madras Establishment of Madras, East Indies, 9th January 1823

The Asiatic Journal and Monthly Register for British India and its Dependencies, volume XII, July to December 1821

32 thoughts on “Dido Elizabeth Belle – New information about her siblings”