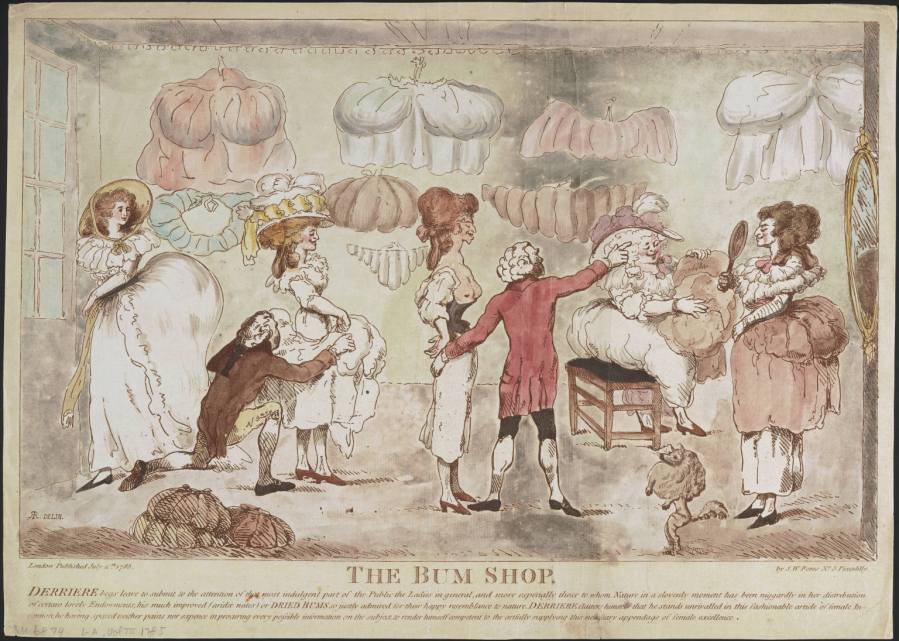 Fashions are continually changing but briefly, during the 1770s and early 1780s, women wore the most amazing items known as false rumps. They were large pieces of cork worn in ‘pockets’ under the straps of their stays, which enhanced the lady’s posterior and made her waist look smaller and more delicate. Think Kim Kardashian: does she know that she would have been the ultimate late eighteenth-century fashion icon, we wonder? False rumps were mocked mercilessly by the press and in satirical caricatures (the old-fashioned way of breaking the internet!), and there was even a suggestion that they should be taxed to raise money for the government.

Surely, they can’t have been comfortable but, on at least one occasion, the wearing of a cork rump acted as a life preserver (Norfolk Chronicle 04 July 1778).

On Sunday evening a very ludicrous accident happened at Henley upon Thames. A large party from town went after tea to enjoy the coolness of the evening on the banks of the river. Youth and spirits hurried them into such sallies of vivacity, that in running with too much precipitation, a lady’s foot tripped and she fell into the Thames. The consternation was general; but somehow everyone was surprised to see her swim like a fishing float, half immersed, and half above the water. It seems that the lady had been furnished with an immoderate sized cork rump, which buoyed her up so completely that she looked like Venus rising from the water. She was towed to shore by a gentleman’s cane without the least injury but wet petticoats.

So, fashion it seems did have its uses.

Your fake derriere was also a great place to hide contraband according to a report from Paris:

The present fashionable protuberances, so much in vogue among the females, have by the adroitness of two dressy fair ones of this capital, been turned to a profitable instead of expensive fashion and gave rise to a laughable adventure: the females in question had contrived to fill bladders with brandy, which they substituted for cork, wool wire etc and thus equipped in the most outré prominence of the mode, they passed several times daily unsuspected through the gates of Paris, smuggling no inconsiderable quantity of brandy.  The frequency of their excursions caused suspicion among the officers at the gates, who attempted to touch their garments, but this was resisted by the fair ones with every appearance of affected modesty. However, one of the officers, having sufficient information of what was going on determined to detect them, and providing himself with a sharp pointed instrument, he slyly pierced what nowadays is usually made from cork, when lo! A fountain of brandy played from the orifice to the great diversion of the spectators, and to no small confusion of the fair one. The result was rather serious, as they were both confined; and there are now actually females at the gates, whose business it is as decently as possible, to examine into the protuberances of such ladies as appear to be in outré of the present fashion. What a pity, as there are so few means for females to gain a decent living, that they should not be permitted to dress to advantage when fashion will admit of it.

When a riot broke out in Covent Garden during the hustings for the election of 1784, it was reported that one lady’s cork rump was shot off and an elderly woman, who was not so fashion forward and whose behind was not so well padded, received a bullet in her… ahem, well! We’re sure you can guess!

As a fashion accessory, the cork rump was short lived and by the end of the 1780s ‘bum-less beauties’ became all the rage.

Courtesy of the British Museum