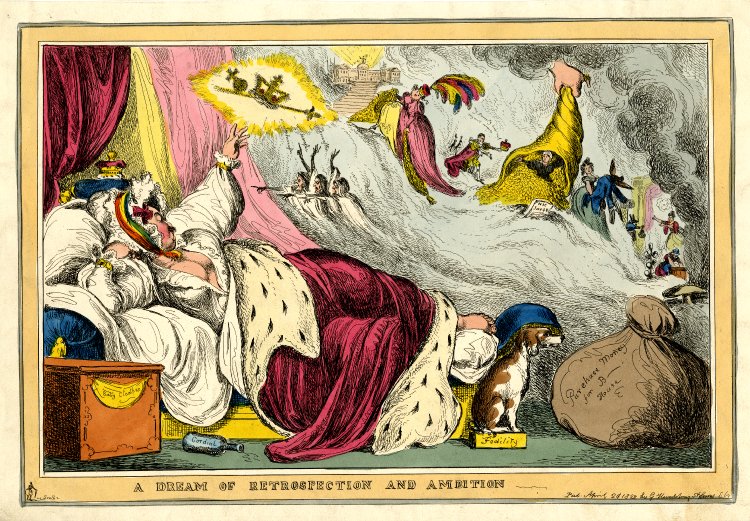 As well as being essential items of clothing to help people stay warm on those cold winter nights and to cover their modesty, people clothed only in their night apparel provided the caricaturists of the day with a plentiful supply of material, so we thought we would take a quick, lighthearted look at a few of these to cheer up a cold winter’s day.

A lean old woman in night-cap and shift sits in an arm-chair pouncing on an insect on her upraised knee.

People wearing just their nightwear was yet another way of mocking the ‘great and the good’ of the Georgian Era, so here we go with just a small sample of the amusing caricatures of the day.

Here we have the Duke of York and his mistress Mrs Clarke, neither bearing any resemblance to the actual people however, as you can see from the painting of Mary Anne below.

Next we have a satire on Napoleon in 1815, as he sits at a table wearing a night-cap writing his will, with English soldiers on guard, not a very flattering image!

Here we have a print by Rowlandson depicting both George III and the future George IV, always a character ripe for mockery.

This one was produced around the time of the marriage of the future George IV to Caroline of Brunswick; Prinny in his very short night shirt and nightcap looking decidedly worried and Princess Caroline smiling! This was not going to end well, as history teaches us! 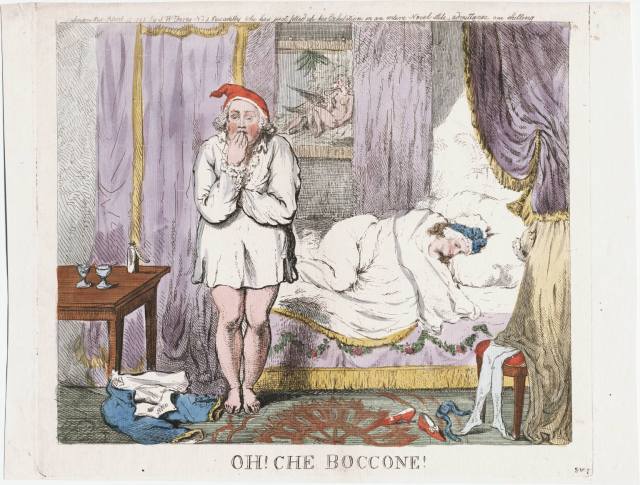 And finally, we move from the nobility to political mockery with a terrified Charles James Fox and his wife in bed, Napoleon standing over them and William Pitt to the left.

A Dream of Retrospection and ambition, The Duchess of St Albans. © The Trustees of the British Museum

4 thoughts on “And so to bed – 18th Century night attire”