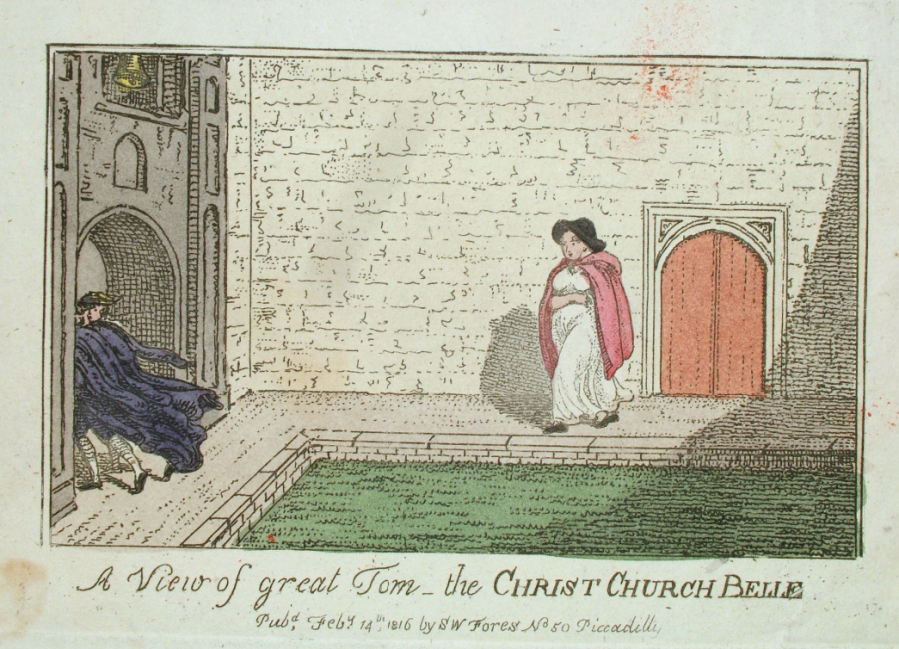 Great Tom is the name of the bell which hangs in Tom Tower at Christ Church, one of the colleges at Oxford University. The following print was produced for Valentine’s Day in 1816, playing on the names, with two Oxford men fleeing underneath Great Tom away from a Christ Church Belle.

We were drawn to this print as it relates, in a loose way, to our book, A Right Royal Scandal. Valentine’s Day 1816 found Lord Charles Bentinck, a younger brother of the Duke of Portland, embroiled in a highly scandalous Criminal Conversation trial following his elopement the previous year with the wife of Sir William Abdy. The lady was the niece of the famed Duke of Wellington and the amorous couple had eloped just weeks after his triumph at the Battle of Waterloo. Tongues had not stopped wagging since!

A divorce and a swift remarriage followed and for a while, the Bentincks lived quietly and tried to let the scandal die down.

But it was the eldest son of Lord and Lady Charles Bentinck who we think of when we see the print above. Charley Cavendish Bentinck did not attend Christ Church, instead he studied at Merton from 1837, and he did not flee from his Belle: instead, he ran directly into her arms! In the village of Summertown, just outside Oxford and nestled against the Cumnor Hills, lived the Lambournes, a humble working-class family.

James Lambourne was a horse dealer known to settle disputes with his fists and his wife Sinnetta was a full-blooded gipsy who had left her family and peripatetic way of life upon her marriage. The couple had a daughter, named Sinnetta like her mother, who was a dark-haired beauty, and she captivated not only the aristocratic Charley but a rival too. Charley won her heart but it was a romance which had to be kept secret and one which had devastating consequences for the two star-crossed lovers.

Not a few Oxford men, of nine or ten years’ standing, could tell a tale of frantic passion for a Gipsy girl entertained by two young men at one time, one of them with ducal blood in his veins, who ultimately wooed and wedded his Gipsy love. So that it is no way impossible (the heirs to the dukedom being all unmarried, and unlikely to marry) that the ducal coronet of ____ may come to be worn by the son of a Gipsy mother

And why was it a right royal scandal? Because Charley Cavendish Bentinck is the great-grandfather of Queen Elizabeth II. Our book looks at the Cavendish Bentinck and Wellesley families, at their ‘scandalous marriages’ and shows how our modern history, as it concerns the British royal family, could look very different indeed, if not for a young gipsy girl.

Reviews of A Right Royal Scandal

…Major and Murden keep their text entertaining and light throughout, making for an easy read of a subject that keeps you engrossed from start to finish. This book is brilliant for those who enjoy the scandals of historical television, with the added authenticity of historical fact. History of Royals, February 2017

Awesome real life biography that could be a scandalous historical romance novel. Loved it. NetGalley, reviewed by Nikkia Neil

The biography reads like a saucy Regency/Georgian novel with love affairs, mistresses, illegitimate offspring, elopements and unsuitable (and unhappy) marriages galore. A golden thread weaves through this colourful tapestry of indiscretions leading us from the Battle of Waterloo to the present day, from the Duke of Wellington’s niece to our very own Prince William… Buy it, read it, you won’t be disappointed – a true 5* gem of a book! Amazon, reviewed by Lally Brown

This really is a case of ‘You couldn’t make it up’. The plots may seem to come straight out of the world of Regency Romance but they are all true, and carefully annotated and verified by Major and Murden. Amazon review – reviewed by Nomester