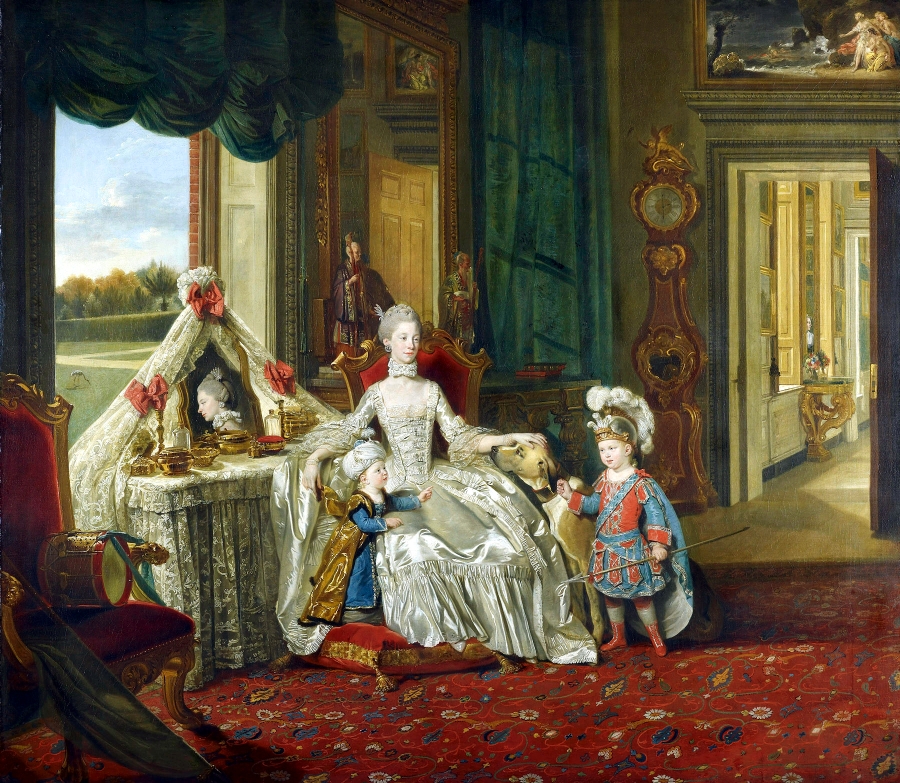 As you would imagine, both the King and Queen were painted by many of the leading artists of the day so we’ll take a look at just a few of them.

We begin with a miniature of Queen Charlotte by the artist Jeremiah Meyer, who was appointed miniature painter to her majesty.

Our next portrait is attributed to Johann Zoffany, 1766. According to John Zoffany, His Life and Works by Lady Victoria Manners and Dr. G C Williamson:

Unfortunately for our artist he was addicted to the practical joke of introducing into his groups ‘without the permission of the original and often in unflattering guise‘ the representations of living persons with whom he had quarrelled or against whom he had  grievance. He is said to have scandalised the English Court by sketching out and showing to his friends a bold replica of his ‘Life School’ in which he had introduced a portrait of Queen Charlotte before she was married and had placed it opposite to the figure of one of her former admirers in Germany.

As Zoffany’ s Life School wasn’t painted until after this portrait of Queen Charlotte, it rather begs the question as to what she had done to upset him – perhaps she didn’t think he had captured her likeness in this portrait! We will probably never know.

In 1789 Queen Charlotte sat for the artist Thomas Lawrence but, according to the National Gallery,  apparently unwillingly, having recently undergone the shock of George III’s first attack of apparent insanity. The pearl bracelets on Queen Charlotte’s wrists were part of the king’s wedding gift to her; one clasp contains his portrait miniature, the other his royal monogram. Although Lawrence’s portrait was considered to be very like Queen Charlotte, it failed to please the king and queen and remained in the artist’s possession

This next painting is by one of the monarch’s favourite artists, William Beechey. In the biography of William Beechey R.A. written by W. Roberts in 1909, he notes that in 1793 Beechey painted a full-length portrait of Queen Charlotte, the Queen, in turn, honoured him by the appointment of Her Majesty’s Portrait Painter.

Interestingly, there is another copy of this portrait at the Courtauld Gallery, dated somewhat later – 1812 – and with slightly different dimensions.

Probably one of the most well-known portraits of her is the one by Allan Ramsay.

And finally, a portrait after Thomas Gainsborough.

12 thoughts on “The many faces of George III’s wife, Queen Charlotte”