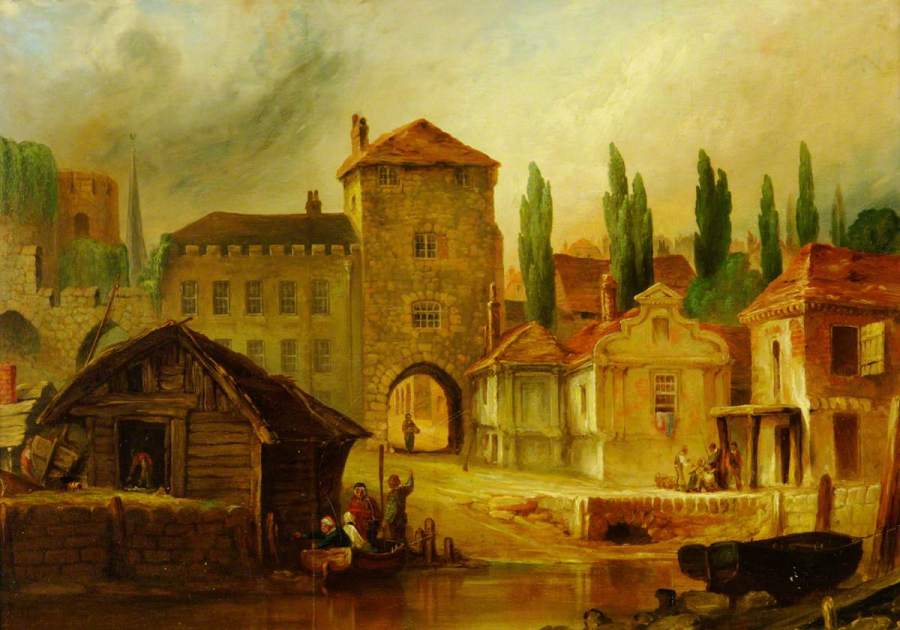 We came across a painting on the ArtUK website, simply titled The Children of Captain RD Prichard and dated 1827; the artist is Philip August Gaugain (1791-1865). It captured our attention and so we decided to turn art detectives and find out a little more on the history behind the portrait. As a result, we can now put names to the two children and provide a little more information on Captain Pritchard.

Their father was Captain Richard Davison Pritchard of the Royal Navy. Born on the 30th May 1788 to Samuel Perkins and Ruth Ann Pritchard, he was baptised at St Mary, Newington on the 19th June. Richard’s father was a naval man and, following in his father’s footsteps at a very tender age, he joined the navy as a Volunteer 1st Class on the 10th August 1797, serving on board HMS Prince and rising to the rank of Midshipman by 1799. Service on HMS George and Blenheim followed before he joined HMS Royal Sovereign, the ship on which he would serve, as Master’s Mate, during the Battle of Trafalgar which took place on 21st October 1805.

Richard Davison Pritchard subsequently served on many royal naval vessels, seeing action and receiving wounds, He was twice discharged from his ship; in 1808 from HMS Terrible upon which he had the rank of Acting Lieutenant he was ‘invalided and unserviceable’ and the following year he joined HMS Avenger as a Lieutenant but was discharged ‘invalided’ at the end of 1809.

At 22 years of age, he married Mary Ann Davis, on the 3rd July 1810, at the church of St Andrew by the Wardrobe. Interestingly, banns had been read at St Clement Danes for three weeks from the 31st December 1809, but no wedding had taken place there. Did Mary Ann’s family object to her marriage to an out-of-employ naval officer? She was mentioned in the Naval Chronicle as being the only daughter of the late John Davis of Binfield, Berkshire.

Their son, the boy in the portrait, similarly named to his father as Richard Davis Pritchard, was born in the following year, at Langley near Windsor and then there was a gap of 10 years before their daughter Rosanne Mary Pritchard was born, on the 5th February 1821 at the Bank House in Southampton. Rosanne Mary was baptized on the 4th March 1821 at Holyrood, Southampton.

During these years, Pritchard had served in the Transport service between November 1813 and August 1819, attaining the rank of Captain by which he is denoted in his children’s portrait, before embarking on something of a different career path. Rosanne Mary’s birthplace, Bank House, gives a clue. In partnership with a man named John Kellow, Pritchard had gone into business at Southampton as a banker and trader, continuing in this vein until the partnership was dissolved on the 30th December 1827.

It was in the same year that Pritchard’s banking business came to an end that his two children were painted by Gaugain, when they were aged 16 and 6 years. Gaugain also painted the portrait of a Captain Pritchard and a Mary Ann Pritchard three years earlier, and surely these must be their parents, Richard Davison and Mary Ann Pritchard.

The portraits of Captain and Mary Ann Pritchard are held by Southampton City Museums and the portrait of their children by the Walker Art Gallery in Liverpool.

In later life Captain Richard Davison Pritchard returned to his former profession, serving on HMS Meteor and Avon as Lieutenant Commander from February 1838 to September 1841, before he gave up the sea for good. The home to which he retired was Keydell House, an ‘uncommonly pretty cottage villa’ at Horndean in Hampshire.

It is altogether a little snuggery, in a valley of extraordinary beauty. The house stands or rather nestles under the shadow of the hill, on a lawn resplendent in flowers and American plants, looking around its domain without a feeling of envy for any spot in England. It is, in fact,

A BIJOU on a PETITE SCALE…

Perhaps it was his wife’s illness which had prompted the end of his naval service, for Mary Ann Prichard died at Keydell House on the 12th March 1842, leaving her husband inconsolable. She was buried in the churchyard at the nearby village of Catherington a week later. Pritchard put Keydell House up for sale.

DEATHS. On the 12th inst., at Keydell, Horn Dean, Hants, after a long illness borne with the most exemplary Christian patience, MARY ANN, the beloved wife of Capt. R.D. PRITCHARD, R.N., aged 54 years. Her loss will be long and deeply deplored by her afflicted husband and family, and also by a large circle of friends to whom she was endeared by her amiable and affectionate disposition and many virtues. In the circle of her private life, she exhibited a useful example of simple and warm piety, and of that meekness, quietness, and easy seriousness of deportment, which so well become the Christian woman.

The following year Captain Pritchard was living at Hampton Grove in Surbiton, Surrey, although he died at Fareham in Hampshire on the 4th January 1849. He was buried five days later at Catherington near to his former home, Keydell House, and alongside his beloved wife.

So, what of the two children in the portrait? Rosanne Mary married the Reverend Thomas Pyne, incumbent of Hook near Kingston-upon-Thames, Surrey, at Wonston in Hampshire on the 8th October 1850. It was fated to be but a short marriage for Rosanne Mary died on Valentine’s Day 1853, at Surbiton. Her obituary named her as the ‘only surviving child’ of the late R.D. Pritchard Esq, so her elder brother had predeceased her. He was alive when his father wrote his last will and testament, on the 16th December 1843. In that will Captain Pritchard left everything to his daughter Rosanne Mary, stressing that it was not for want of affection for his son that he had done so, but simply because his son had been amply provided for already in ‘bringing him up to his present profession’. Possibly he is the Richard Davis Pritchard who was appointed as a surgeon by the Royal Navy in 1833.

On the 14th inst., at Surbiton, aged 32, Rosanne Mary, the beloved wife of the Rev. Thomas Pyne, M.A., incumbent of Hook, Surrey, and only surviving child of the late R.D. Pritchard, Esq., Captain in the Royal Navy.

Sources used not referenced or linked to above:

The Naval Chronicle, Containing a General and Biographical History of the Royal Navy of the United Kingdom, with a Variety of Original Papers on Nautical Subjects, Volume 24

14 thoughts on “Art Detectives: The Family of Captain RD Pritchard”