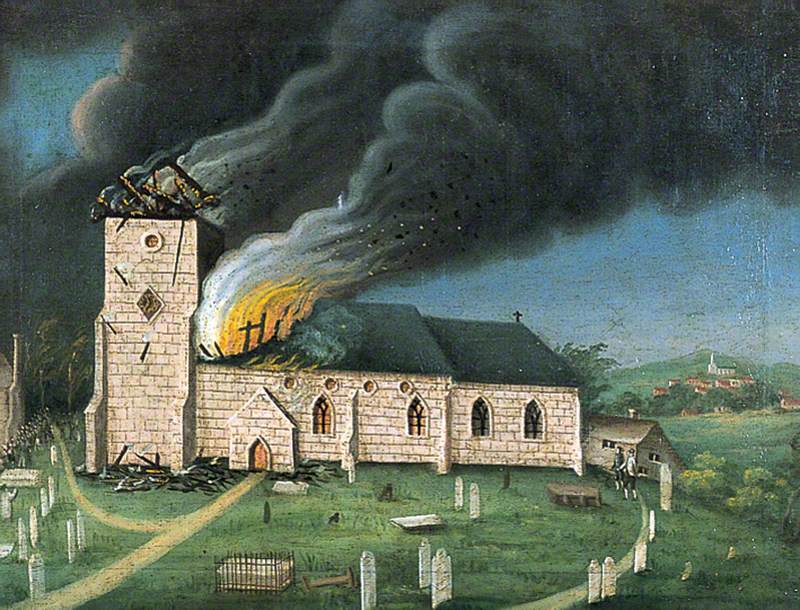 On Wednesday the 19th October 1791, the sea off the Kentish coast ‘ran mountains high, without any apparent cause’. Ships hastily made for harbour and lucky that they did for, on the following morning, a tremendous storm hit the south-east of England, with Kent particularly suffering.

On Thursday 20th October, at half past eleven o’clock and amidst high winds, thunder, lightning, hail and rain, a bolt of lightning struck the wooden steeple of Speldhurst Church near Tunbridge Wells in Kent. Some sources say that a ‘ball’ entered the shingled roof, others that lightning struck the weather vane atop the steeple. However it started, almost instantly flames and smoke could be seen.

As the fire was, so far, confined to the steeple, some people who were nearby rushed into the chancel to save the pulpit cushions, the plate and the parish chest. They did not have time to save anything else for the rain and hail stopped and the wind drove the flames onto the church which was soon engulfed in the inferno. Four hours after the lightning had struck, all that remained of the ancient and beautiful church was ruins, with the tombs and headstones which were closest to the doomed building also suffering damage. Bizarrely the font, which was still whole, had been turned upside down.

Amongst the items lost to the fire were the four bells housed in the steeple (they were melted) and the church monuments.

The monuments (one of which was very ancient, belonging to the Waller family, on a large scale, and a most curious piece of workmanship in marble) crumbled to dust.

For Speldhurst villagers William Card and Elizabeth Cole the tragedy was on a very personal level; they were due to marry in the church on the following day. Determined that the wedding should go ahead, a small space was cleared in the rubble by the chancel door and the couple were married there but, it was reported, ‘the bride’s new shoes were completely spoiled’.

It was not just Speldhurst which had suffered, although the village saw the most devastation. In Tunbridge Wells itself the hail broke windows and caused other damage, and a man shooting a mile away from Speldhurst had ‘his gun twisted out of his hand by the lightning’. The church at Rainham near Canterbury was also struck and damage was noted at Newport on the Isle of Wight due to lightning strikes as the storm spread through the south-east of the country. It desisted during Thursday afternoon (although the wind continued to blow), but overnight and into the Friday morning there were further storms.

The Waller family lived at Groombridge manor house in Speldhurst; Sir Richard Waller (who died in 1431) had custody of a French royal hostage for many years. Charles, Duke of Orléans (1394-1465) had been taken prisoner by Waller after the battle of Agincourt in 1415, and both the duke and Waller were benefactors to the church which was destroyed in 1791. The dukes arms, which had been granted to Waller to quarter with his own, were displayed in stone above the porch of the church.

A new church was built (it opened in 1805), but that was demolished in 1870 and a further church now stands on the site. The website of the current church says that ‘remarkably, a few relics of the old church survive, including the coat of arms of the Duke of Orléans over the South door, a sundial and the very weather vane which was [reputedly] struck in 1791’.

The History and Topographical Survey of the County of Kent: Volume 3 (1797) via British History Online.