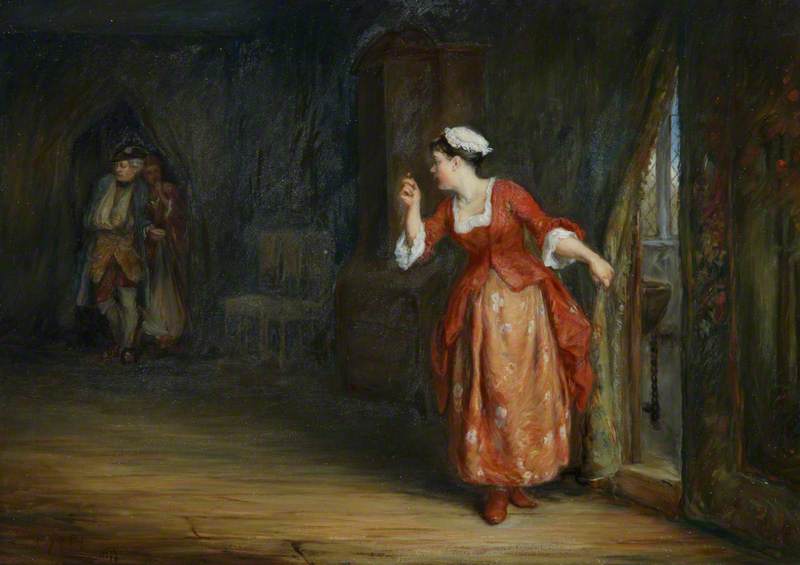 Granville William Wheeler Medhurst was born c.1765 at Kippax, the son of Thomas Medhurst, Esquire. In 1787 he married Sarah Jennings at St Mary’s in Lewisham, Kent. The new Mrs Medhurst was described as a dutiful wife and tender mother, and one of the most amiable of women. Living at the stately Kippax Hall a few miles from Pontefract in West Yorkshire, life seemed good; Mr Medhurst was reported to have £7,000 per annum. It was later reported that eight children were born to the couple, and that five of these were living on the fatal night of 3rd/4th May 1800.

Under the veneer of their gilded life, there was a problem. Although it seems to have been kept largely from the servants for some time, Medhurst was becoming deranged and anxious. He was convinced people were coming to take him away and that his loving wife was plotting to poison him. Mrs Sarah Medhurst was certainly fully aware of the condition of her husband, even to the extent of contemplating taking the children and leaving him for some time. If only she had…

During the early spring of 1800 the servants too had become aware of the state of mind of their master. He had appeared in turn sullen, deranged, anxious and withdrawn. On the evening of Saturday 3rd May 1800 Medhurst entreated his servants to retire early for the night. Some, like the cook and nursery maid, slept at Kippax Hall, others had their own home in the nearby village. Thomas Spinke was one who slept in the village, and he recounted how his master said he wished his family to go to bed early and wanted the house to be quiet. The house was to be far from quiet however.

The cook, Ann Dickinson, protested about retiring early; she had not finished her duties and a small fire still burnt in the kitchen hearth. Along with the nursery-maid Ann Tyson she slept in the children’s nursery which had a connecting door to Mrs and Mrs Medhurst’s rooms. There was a bit of a fuss and the children began to cry; Mr Medhurst said he could smell burning, that he was to be poisoned, and peered from the windows convinced there was someone at the gates who was coming for him. His wife decided to sleep with her daughters in the nursery as Medhurst proposed to sleep with a drawn sword and two pistols under his pillow and the women locked the connecting door.

All was quiet for a time and then they were disturbed by Mr Medhurst demanding the door be opened or he would shoot his way through it. Still fully dressed and with his sword in one hand and a pistol in the other, he entered the nursery and demanded the nursery-maid confess to him, waving his sword above her head and finally rapping her skull with the hilt. His wife cried, “My dear, don’t kill your servant, kill me, if you take any one’s life, take mine”. Medhurst gave his wife a knife with which to protect herself and promised not to hurt her. Tenderly he touched his wife and said “you won’t hurt me”, to which she replied “no, let us go to bed”. The cook saw her master unload his pistols and then everyone retired, the trusting lady of the house bidding her servants, “God bless you” as she left them to go with her husband.

Thomas Spinke returned to Kippax Hall around half past six o’clock the following morning and was in the stable when the two eldest Medhurst children came to find him, crying and asking him to come to the house. Creeping upstairs into the Medhurst’s bedroom he saw his mistress lying on the bed, her feet hanging down. Spinke knew not if she was dead or alive but watched as the master of the house appeared from behind a curtain, still fully dressed and carrying in his hand a drawn sword, ‘bloody, fresh, and wet’. Driving Spinke from the room, Medhurst locked the door.

Thomas Spinke took the children away from the house, with their father crying out to them from an upper window. The eldest boy shouted back, “you villain, you have killed my mama, and if I had a pistol I would shoot you through the head’”. Medhurst replied “you are mistaken, I have not hurt your mama”.

A constable was sent for as well as the Pontefract volunteers, but with the master of the house armed, dangerous and roaming the upper floor there was a stand-off which lasted some time before one of the volunteers, a brave man, managed to find a way in (there were two doors to the Medhurst’s bedroom suite, and only one had been locked) creep up behind Medhurst and disarm him.

An inquest was taken at the hall on the body of Mrs Medhurst, and a charge of wilful murder was laid against her husband, Granville William Wheeler Medhurst. Sarah Medhurst was buried at Kippax on the 6th May 1800.

When the case came to trial, Medhurst’s defence was insanity and this was corroborated by experts and witnesses. He was therefore acquitted of murder but ordered to be confined in the gaol at York Castle. There he remained until the 26th November 1802 when he was given over to the care of Dr Thomas Monro of Brook House, upper Clapton (a man accused of ‘wanting in humanity’ towards his patients) and a committee established to manage his estate at Kippax during until his son was of age. It was this committee who petitioned to have Wheeler removed from Brook House to a ‘House for the reception of Lunatics’ in Middle Mall, Hammersmith. A warrant for his removal was provided in the summer of 1816.

Granville William Wheeler Medhurst lived to 77 years of age and, when he died in 1840, was confined in Moorcroft House at Hillingdon near Uxbridge in Middlesex, a lunatic asylum which was run by Dr James Stillwell until his death the year before. In his old age he had suffered from rheumatism and was allowed to take supervised trips to the seaside for so that the air and sea bathing might prove beneficial. He was buried in the churchyard of St John the Baptist in Hillingdon, and his fortune devolved to his grandson, Francis Hastings Medhurst.

But there is yet one more twist to this tale. When Medhurst died, his grandson was in prison, convicted of the manslaughter of a schoolfellow, Joseph Alsop. On 9th March 1839, at Dr Frederick Sturmer’s school, the Rectory House Academy at Hayes, young Medhurst had accused another pupil, Dalison, of breaking the glass of his watch. When Alsop leapt to Dalison’s defence a scuffle ensued which ended with young Medhurst taking a clasp-knife from his pocket, opening it and stabbing Alsop in his stomach. Although not instantly fatal, within just a few days Alsop was dead.

Francis Hastings Medhurst was accused, as his grandfather had been before him, of wilful murder and taken to Newgate. The charge was transmuted to one of manslaughter for which he was found guilty and sentenced to three years imprisonment in a house of correction.