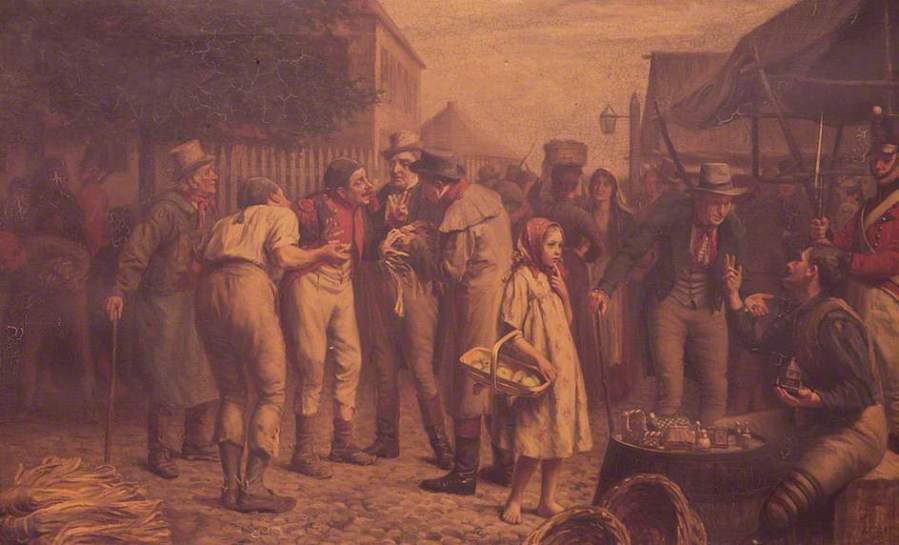 In the December of 1796 work began on building a prisoner of war camp at Norman Cross on the border between Huntingdonshire and Leicestershire. Built to house French prisoners of war, it was the first such purpose built camp anywhere in the world.

The site was chosen carefully – it could not be too close to the coast (which would make escape attempts more likely), near enough to London to be reached easily but not too close and in an area in which food and water would be readily available. Norman Cross fitted the bill perfectly.

The numbers of men held in the camp varied, but on average the population was around 5,000, mainly from the lower ranks of soldiers and sailors (occasionally wives were also taken up, if they were captured at their husbands sides on board ships, but they were generally held outside the prison as were some officers and civilians of a slightly higher status who were trusted on their honour not to break their parole). Escape attempts by the rank and file prisoners were a regular occurrence, sometimes successfully.

George Borrow (1803-1881), author and friend to the gypsies, remembered the camp from his youth – his father Captain Thomas Borrow was, around 1811, one of the men guarding the camp and the prisoners along with his regiment, and his family travelled with him. From Lavengro: The Scholar, the Gypsy, the Priest (1851), a mix of memoir and novel:

At length my father was recalled to his regiment, which at that time was stationed at a place called Norman Cross, in Lincolnshire, or rather Huntingdonshire, at some distance from the old town of Peterborough.  For this place he departed, leaving my mother and myself to follow in a few days.  Our journey was a singular one.  On the second day we reached a marshy and fenny country, which owing to immense quantities of rain which had lately fallen, was completely submerged.  At a large town we got on board a kind of passage-boat, crowded with people; it had neither sails nor oars, and those were not the days of steam-vessels; it was a treck-schuyt [trekshuit, a form of barge or narrowboat], and was drawn by horses.

Young as I was, there was much connected with this journey which highly surprised me, and which brought to my remembrance particular scenes described in the book which I now generally carried in my bosom.  The country was, as I have already said, submerged—entirely drowned—no land was visible; the trees were growing bolt upright in the flood, whilst farmhouses and cottages were standing insulated; the horses which drew us were up to the knees in water, and, on coming to blind pools and “greedy depths,” were not unfrequently swimming, in which case the boys or urchins who mounted them sometimes stood, sometimes knelt, upon the saddle and pillions.  No accident, however, occurred either to the quadrupeds or bipeds, who appeared respectively to be quite au fait in their business, and extricated themselves with the greatest ease from places in which Pharaoh and all his host would have gone to the bottom.  Nightfall brought us to Peterborough, and from thence we were not slow in reaching the place of our destination.

And a strange place it was, this Norman Cross, and, at the time of which I am speaking, a sad cross to many a Norman, being what was then styled a French prison, that is, a receptacle for captives made in the French war.  It consisted, if I remember right, of some five or six casernes, very long, and immensely high; each standing isolated from the rest, upon a spot of ground which might average ten acres, and which was fenced round with lofty palisades, the whole being compassed about by a towering wall, beneath which, at intervals, on both sides sentinels were stationed, whilst, outside, upon the field, stood commodious wooden barracks, capable of containing two regiments of infantry, intended to serve as guards upon the captives.  Such was the station or prison at Norman Cross, where some six thousand French and other foreigners, followers of the grand Corsican, were now immured.

What a strange appearance had those mighty casernes, with their blank blind walls, without windows or grating, and their slanting roofs, out of which, through orifices where the tiles had been removed, would be protruded dozens of grim heads, feasting their prison-sick eyes on the wide expanse of country unfolded from that airy height.  Ah! there was much misery in those casernes; and from those roofs, doubtless, many a wistful look was turned in the direction of lovely France.  Much had the poor inmates to endure, and much to complain of, to the disgrace of England be it said—of England, in general so kind and bountiful.  Rations of carrion meat, and bread from which I have seen the very hounds occasionally turn away, were unworthy entertainment even for the most ruffian enemy, when helpless and a captive; and such, alas! was the fare in those casernes.  And then, those visits, or rather ruthless inroads, called in the slang of the place [23] “straw-plait hunts,” when, in pursuit of a contraband article, which the prisoners, in order to procure themselves a few of the necessaries and comforts of existence, were in the habit of making, p. 24red-coated battalions were marched into the prisons, who, with the bayonet’s point, carried havoc and ruin into every poor convenience which ingenious wretchedness had been endeavouring to raise around it; and then the triumphant exit with the miserable booty; and, worst of all, the accursed bonfire, on the barrack parade, of the plait contraband, beneath the view of the glaring eyeballs from those lofty roofs, amidst the hurrahs of the troops, frequently drowned in the curses poured down from above like a tempest-shower, or in the terrific war-whoop of “Vive l’Empereur!”

Borrow had his first encounter with the gypsies outside Norman Cross. In a paper given by David Nuttall at the Easter Conference of the George Borrow Society, he speculates that the gypsies Borrow met, probably Faden John and Morella Smith, were in the area specifically because of the money-making potential from the prisoner of war camp and carding straw plait ready to sell on for illicit use in the prison where it was turned into plaited objects which then could be sold.

Gambling was rife within the walls of the camp, with some men gambling away both their clothes and their food rations – some even died of starvation because of this. But generally discipline was good and the prisoners crafted various objects to sell to supplement their income. Fanny Chapman, whose diaries are hosted on our sister blog, recalled being given an ivory chess set in 1811 which had been carved by a French prisoner of war at Norman Cross.

As the war ebbed and flowed, so did the number of prisoners – by the summer of 1802, following the Treaty of Amiens, the prison stood empty and the government advertised the buildings for sale. This was swiftly countermanded just months later when it became obvious that, with hostilities resumed, the buildings comprising the camp would once again be needed for their original purpose. A year later, Dutch and French prisoners were being marched from the prison ships in which they had been held to Norman Cross.

After peace had been declared between France and Britain in 1814 the remaining prisoners were free to return home and most, although not all, did so. One Jean (John) Habart married a local girl and settled in Stilton near Peterborough where he worked as a malster and innkeeper and ‘bore an excellent character for honesty and integrity’. He died, aged 63 years, in 1846 when he was discovered, his neck broken, on the ground next to his cart on his return from Peterborough market. The inquest into his death returned a verdict of ‘accidental death’ but it seemed to have been suspected that foul play might have been the cause.[i] He was possibly the Jean Hobart captured with two other men on the 26th June 1803 from a French fishing vessel off Calais, who was employed as a baker while in the camp and discharged in 1811.[ii]