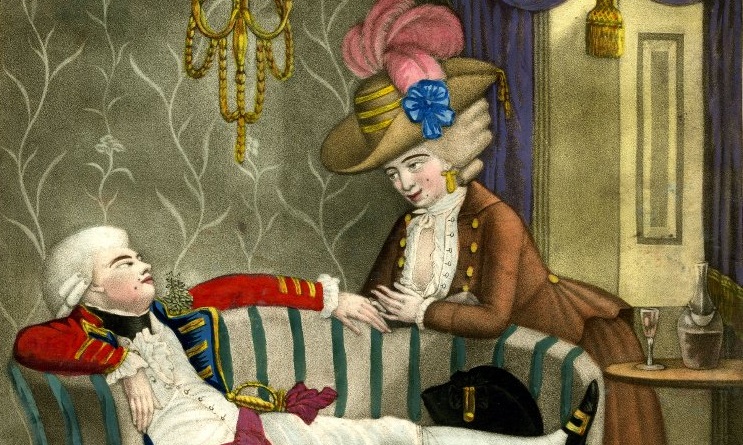 We have some exciting news to share with our readers. Our book is now available for pre-order! We’ll give the links at the bottom of this post.

Additionally, we can also now reveal the cover. The image we chose to use of Grace is a miniature from a private collection, painted by Richard Cosway around the time of her ill-fated marriage to Dr John Eliot. It shows Grace as a young and innocent woman, scarcely out of her childhood years, just as she was about to embark on the life which would lead to her infamous notoriety. We loved this miniature of her, and chose to use it on the cover because our book is about so much more than just Grace’s career as a courtesan; it also shows her at the heart of her family and recounts their adventures through life as well as Grace’s. As such, we thought this image, which shows her as she was remembered to her family, was particularly apt.

The picture at the bottom of the cover depicts the storming of the Tuileries in August 1792 during the French Revolutionary years. Grace was present in Paris during this event and recounted her participation in the immediate aftermath of it in the pages of her Journal.

As first time authors this is a thrilling time for us, not least because we are longing to share the information we have uncovered during our many years of research into Grace and her family. We have lots which is new and hitherto unknown, and we are honoured to have been allowed to include within the pages of our biography some very rarely seen pictures connected to Grace and to her family.

Divorced wife, infamous mistress, prisoner during the French Revolution and the reputed mother of the Prince of Wales’ child, notorious courtesan Grace Dalrymple Elliott lived an amazing life in eighteenth- and early nineteenth-century London and Paris. Strikingly tall and beautiful, later lampooned as ‘Dally the Tall’ in newspaper gossip columns, she left her Scottish roots and convent education behind, to re-invent herself in a ‘marriage a-la-mode’, but before she was even legally an adult she was cast off and forced to survive on just her beauty and wits. The authors of this engaging and, at times, scandalous book intersperse the story of Grace’s tumultuous life with anecdotes of her fascinating family, from those who knew Thomas Jefferson and George Washington, and who helped to abolish slavery, to those who were, like Grace, mistresses of great men. Whilst this book is the most definitive biography of Grace Dalrymple Elliott ever written, it is much more than that; it is Grace’s family history which traces her ancestors from their origin in the Scottish borders, to their move south to London. It follows them to France, America, India, Africa and elsewhere, offering a broad insight into the social history of the Georgian era, comprising the ups and downs, the highs and lows of life at that time. This is the remarkable and detailed story of Grace set, for the first time, in the context of her wider family and told more completely than ever before.

An Infamous Mistress: The Life, Loves and Family of the Celebrated Grace Dalrymple Elliott will be published by Pen and Sword Books on the 30th January 2016.

Please note: if you are reading this from outside the UK, we are expecting it to be available in America a few months later than the UK publication date, and hopefully elsewhere worldwide too. We will keep you informed and update this page as soon as we have more information.

10 thoughts on “Cover reveal of ‘An Infamous Mistress: The Life, Loves and Family of the Celebrated Grace Dalrymple Elliott’”