When you picture gypsies of the past, do you picture them travelling in their gaudily painted horse-drawn caravans or vardos?  In truth, this form of transport is a relatively modern invention, and the gypsy people generally sheltered in ‘bender’ tents, using donkeys and carts to transport and carry their tents and their belongings from place to place.  A bender tent is formed from a covering of tarpaulin placed over flexible branches, usually willow or hazel, which are staked into the ground, a crude but very effective form of shelter. 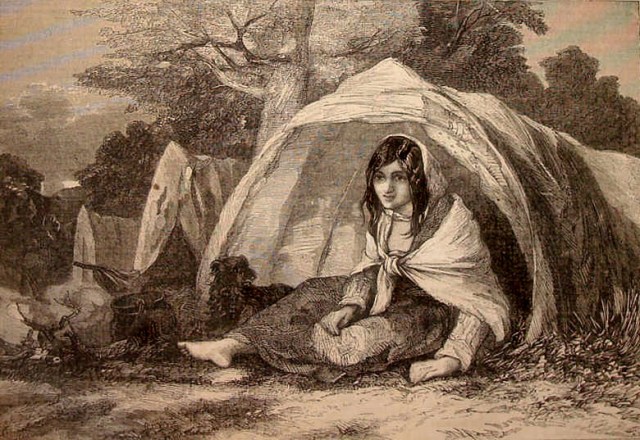 For this reason, it was common for these people to ‘overwinter’ in lodgings in towns and cities rather than camp in the very coldest months.  Sometimes though, they did find themselves living in their tents during the freezing temperatures.  On the evening of the 17th February 1820, in the Lincolnshire countryside, a boy was born in such a tent in sub-zero temperatures.

The Stamford Mercury newspaper, dated the 25th February 1820, reported on the birth.

At eleven o’clock on the night of the 17th inst. a poor woman of the gipsy tribe was safely delivered of a fine boy in a lane a mile distant from the village of Wellingore, in this county, under scarcely any other covering than the canopy of heaven.  The thermometer that night was ten degrees below freezing point: but notwithstanding the inclemency of the weather then and since (the ground being covered with frost and snow), the mother and child are both doing extremely well in their humble camp.

The infant was baptised at the parish church in Wellingore three days later, on the 20th February, and given the name of Nathaniel.  His parents were named as Joshua and Ann Smith, with Joshua’s trade in the baptism register listed as ‘beggar.’

One thought on “Under the canopy of heaven: A Gypsy’s winter birth in Lincolnshire, 1820”