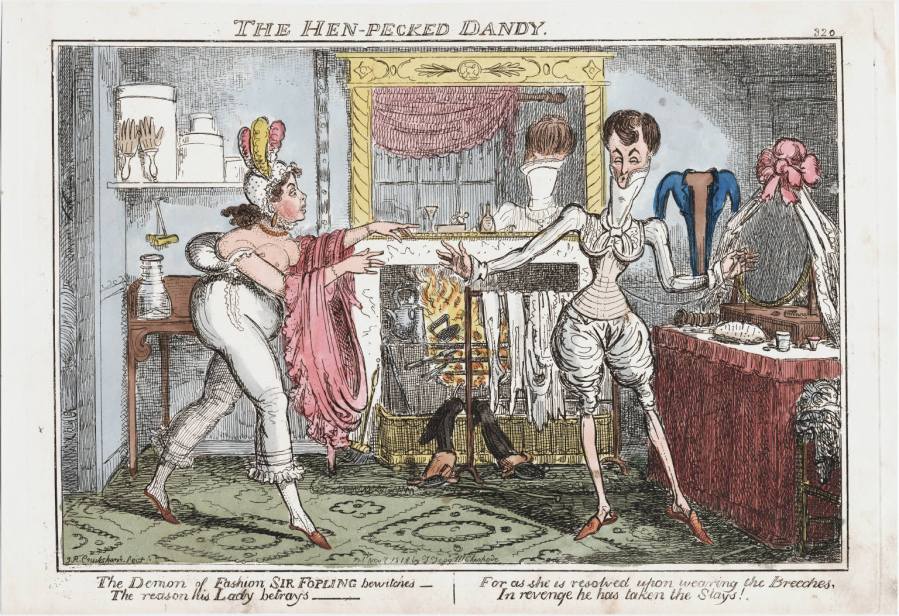 We do so hope the following is true, as it’s a wonderful image, although an outdated gender stereotype.  Today the correspondent would no doubt have filmed the antics of the Exquisite and uploaded them to YouTube, or taken a photo to mock him on Facebook or Twitter.  But not so back in the days of the Regency.  Then, it was a letter to a paper (written in August 1818) and a satirical print (published in 1819) instead.

A correspondent furnishes us with the following picture of an Exquisite alias a Dandy in distress.

AN EXQUISITE ALIAS DANDY IN DISTRESS!

“Walking in one of the squares last week it was my fate to follow an Exquisite, stock’d and stay’d laced and bound collar’d and pilloried in all the fashion, so slender so straight and so stiff that a man of ordinary strength might have used it as a walking stick.  This thing flourishing a very nice perfumed handkerchief happened to let it drop; the question then was how to get it up again; stoop it could not, and I confess I enjoyed its distress; for tho’ for any other female I would have raised the handkerchief with alacrity, I wish’d to see how this creature would help itself, then thus it was: having eyed the handkerchief askance, something like a magpie peeping into a marrow-bone, it gently straddled out its legs, and lowering the body between them it brought the right hand in contact with the object sought.  What shall we say to the association of ideas, when I assure you, that looking on this unmanly figure, brought into my mind the knights of old, who when once unhorsed, could never from the weight and stiffness of their armour hope to mount again.”  N.B. It is found remarkable convenient in such a case for the Exquisite to carry a cane or stick with a hook at the end, as he may fish up anything he unfortunately drops without breaking his back or exciting the pity or risibility of the spectators.

So our readers can appreciate the difficulties presented by the underpinnings worn by an Exquisite, this Robert Cruickshank print from 1818 shows him in his stays.

The reason his Lady betrays

For as she is resolved upon wearing the Breeches

In revenge he has taken the Stays!

The following definitions of Dandy and an Exquisite, which illustrate the (minor) differences between the two (mainly the use of stays!) are taken from Slang: a dictionary of the turf, the ring, the chase, the pit, of bon-ton, and the varieties of life, 1823.

DANDY – an invention of 1816, and applied to persons whose extravagant dress called forth the sneers of the vulgar; they were mostly young men who had this designation, and they were charged with wearing stays – a mistake easily fallen into, their wide web-belts having that appearance.  Men of fashion all became dandy soon after; having imported a good deal of French manner in their gait, lispings, wrinkled foreheads, killing king’s English, wearing immense plaited pantaloons, the coat cut away, small waistcoat, with cravat and chitterlings immense: Hat small; hair frizzled and protruding.  If one fell down, he could not rise again without assistance.  Yet they assumed to be a little au militaire,  and some wore mustachios.  Lord Petersham was at the head of this sect of mannerists.

EXQUISITE (an) – another name for Dandy, but of more refined or feminine manners.  The Chronicle says, “It is a fact that an Exquisite fainted away on Friday, Dec. 20th, in Bond-street, and was assisted into a shop, where he remained some time before he recovered.  Medical aid being sent for, it was ascertained that his valet had laced his stays too tight.”  Such were ‘Dandy-prats,’ circa 1750.

Slang: a dictionary of the turf, the ring, the chase, the pit, of bon-ton and the varieties of life by Jon Bee Esq, editor of the Fancy, Fancy Gazette, Living Picture of London, and the like of that, 1823

6 thoughts on “An Exquisite, alias Dandy in Distress!”