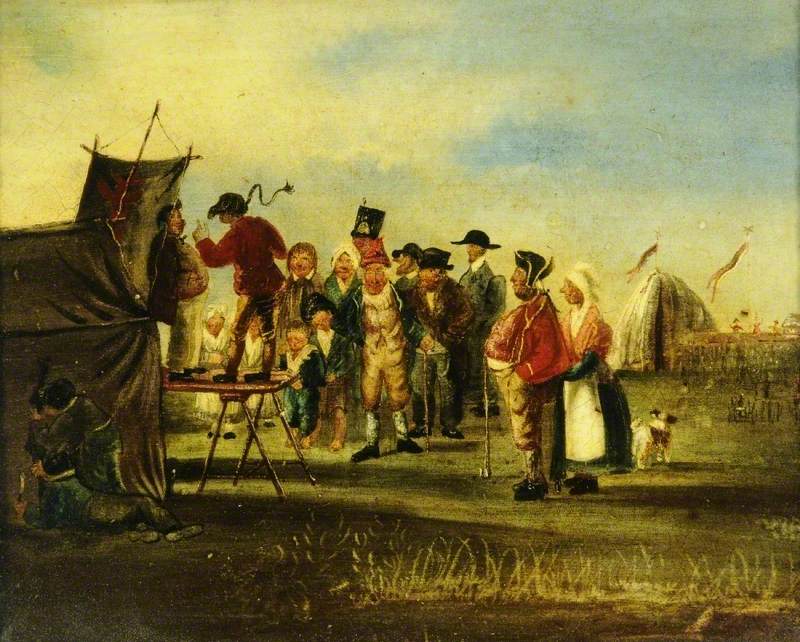 In an earlier article, we looked at John Coan, the Norfolk Dwarf. As a companion piece to that article, we now turn our attention to Frances Flower, the Nottinghamshire Giantess.

Frances was baptized at Newark-on-Trent in Nottinghamshire on the 25th October 1800, the daughter of John and Catherine Flower. Her father John was a gardener and perhaps he tended to his family as well as he did to his plants for his daughter Frances grew unusually tall. By the time she was in her late teens she was around seven feet in height and being exhibited by Mr Samuel Gear, incongruously a fishmonger from Nottingham, who had spotted an opportunity for making a little extra money. Billed as the ‘Nottinghamshire Giantess,‘ Frances appeared at fairs around the country.

On the 15th October 1820 at Hull in Yorkshire, Frances married a man named Sampson Bark, late the landlord of the Case-is-Altered and the Lion and Lamb public houses in Nottingham, possibly he also seeing chance to exploit Frances’ height to his own advantage for she continued to travel the country to exhibit herself to a curious public.

Shortly after her marriage, she was exhibited at Hull as ‘the greatest Natural Curiosity ever Exhibited in EUROPE,’ her age erroneously given as ‘not yet seventeen’ years when she was actually twenty.

The Morning Post newspaper ran a few lines on her on the 21st September 1821, mentioning the ‘universal admiration’ she excited and referring to her as Mrs Bark, the Nottinghamshire Giantess.

To her the meed of admiration,

What mortal can deny!

For ‘mongst all classes of the nation,

She must stand very high.

Sampson Bark died in Edinburgh in December 1825. The Stamford Mercury reported his death in their 2nd December edition.

At Edinburgh, on Sunday se-nnight, Mr. Sampson Bark, well known as having formerly kept the Lion and Lamb in Nottingham; but after his marriage with Miss Flower, “the Nottinghamshire Giantess,” he travelled from fair to fair with a caravan.

In 1827 Frances, having reverted back to her maiden name, appeared at Humberstone Gate in Leicester with the Albion Company as the Yorkshire Giantess, alongside such attractions as a Ladies Fortune-telling Pig (which we would dearly love to know more about!), a New Zealand Cannibal and a woman who was only 30 inches tall.

Unless Nottinghamshire had gained another Giantess, Frances was still exhibiting herself in 1837 at a Michaelmas Fair in Kent where she was the chief source of attraction and described as an Amazon. Her trumpeter proclaimed her the ‘finest, tallest, stoutest, and the most proportionable woman of the age,’ and she shared a snug booth at the fair with two other women whose appearance, unfortunately, marked them as in some way different.

We lose track of Frances after this but hope she did eventually manage a life away from the fairs where she was paraded as an object of curiosity.

4 thoughts on “The Nottinghamshire Giantess”